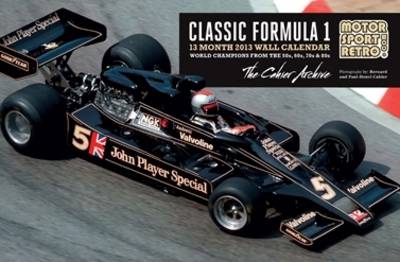 By starting this 13-month wall calendar with December 2012 it gives you a good reason to get a head start! Its 16.625 x 10.75” format is pretty standard so if you already have a faded spot on the wall, this calendar will fit right in it.

The photos are by Cahier père et fils. The former, Bernhard, is of course no longer with us (1927–2008) but his son, Paul-Henri (b. 1952) is still at it. Their combined archive numbers in the hundreds of thousands of images and other artifacts and is the only collection to still be in family hands. Bernard approached his photography primarily as a reporter whereas Paul-Henri has a more artistic approach. In this calendar you can actually tell that difference just by looking at the composition/framing of the images. 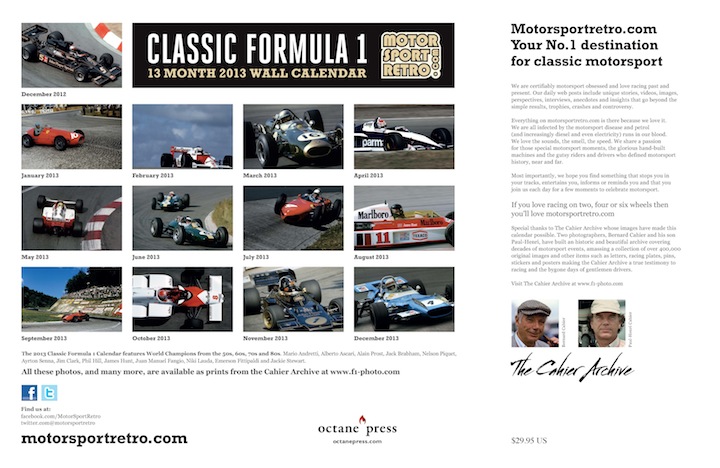 All photos here are in color, the oldest one from 1953 and the newest from 1988. The list below shows the photographer’s initials at the end:

Why these cars/drivers and in this random order is anyone’s guess. The bottom half of each folded-open month has the actual calendar (days of the month) and a photo caption listing the event, car, and driver with his basic stats. Now, a calendar is not a textbook but it seems a little more detail in the captions (see this publisher’s Pete Lyons calendar) would go a long way towards enticing new readers to develop an interest in F1, or photography. Nothing is said about the cars, the tracks, the context of the photos—a whole wealth of interesting, and tantalizing, information thus remains unexplored.

Except for a “Cahier Archive” slug the racing images are free of any other type and thus suitable for framing. (They will of course have a hole for wall-mounting at the top.)

It may be interesting to note that Bernard took up F1 photography the year his son was born, 1952 (that’s one way to get out of the house . . ). He co-founded the International Racing Press Association (IRPA) in 1968 and remained active both in photography and as public relations consultant for Goodyear in F1 well into the 1980s. American readers will, or should, know that Bernard came to the US after WWII and sold cars at a Los Angeles import-car dealership (Roger Barlow’s International Motors) alongside such future luminaries as Phil Hill and Ritchie Ginther.

Speed: The Art of the Performance Automobile »
« Cord 810/812, The Timeless Classic