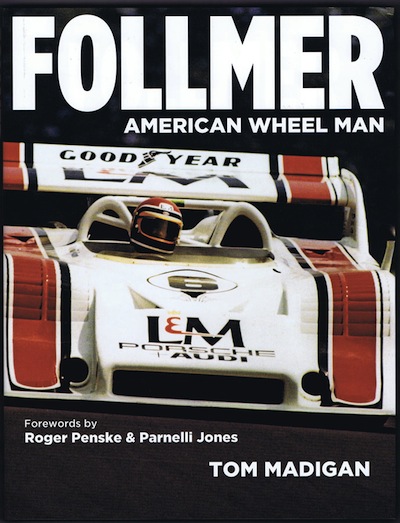 This big, brawny book is an absolute festival of fabulous motor-racing photography. Strikingly printed on glossy paper in large format, image after image by fine photographers stun with their impact and significance. Thanks to George Follmer’s (b. 1934) peripatetic career, which embraced the Can-Am, Trans-Am, Formula 1, Indy racing, Formula 5000, 24 Hours of Le Mans, SCCA Nationals, NASCAR stock cars and more, these images are a bright kaleidoscope of auto racing as it was in the 1960s and 1970s—the era of Follmer’s racing.

We are dealing here with a man born in Phoenix, Arizona, on January 27, 1934, whose family moved to California two years later. Having been caught up in the Korean War, Follmer was married and still in college when he discovered in his mid-20s that driving his VW Beetle in gymkhanas was fun. This led to a race at Riverside in which he discovered that he “could drive a car to its limits. I was hooked and there was no going back. I loved racing. It became a very meaningful thing in my life.” In fact it grew to an obsession.

“It didn’t take long for George’s talent for driving a race car to become evident,” his first wife Glenda told author Tom Madigan. “I believe he had a natural gift. He could just drive any car he raced at the limit.” But this had its downside for the family of a man who felt that if he wasn’t racing he wasn’t earning. “From the time our son Jim was nine years old until he was 19, George was away at a race—or traveling to or from a race—approximately 300 days a year. It was difficult raising the kids without George being there.”

Follmer had serious rewards for his efforts. He came on the scene as winner of the SCCA’s U.S. Road Racing Championship in 1965, at the age of 31. In 1972 he achieved a unique double, winning both the Can-Am and Trans-Am Championships. He was Trans-Am Champion again in 1976. George competed in the 1973 Formula 1 season. Gridding for the first race in South Africa he was 39 years and one month old, making him the oldest Grand Prix rookie since the 1950s. Nonetheless he achieved a podium placing that year with a third in Spain. We feel for George when Shadow gives him only one season in the G.P. circus.

In his prime as a driver Follmer was darkly handsome, perhaps a candidate to be played by Eric Bana in his life story. Rivals remarked on his eyes, dark, penetrating and projecting his menacing aura on the track. “If you ask drivers who have run against George,” the author quotes Jim Busby, “they will all say the same thing—it’s in his eyes. George had that look in his eyes that could strike fear into your heart. He wasn’t just good or great, he was brutally great. He is the real deal and back in the day he came to race.”

Interviews by Tom Madigan with Follmer’s friends and rivals pepper this book with revealing quotations. Admitting his previous passion for drag racing, about which he has written extensively, Madigan structured his book as an odyssey of discovery of both Follmer and new worlds of racing, disclosed through his interviews with team owners, designers, mechanics, friends and rivals on the track. We are invited to sit with the author as he quizzes surviving actors in the drama that was Follmer’s racing.

Always observant, racing driver Sam Posey said this about Follmer: “George had a toughness that I didn’t have, not a put on, but he was very competitive. He earned a lot of respect. Some compared him in the same category with Mark Donohue and Parnelli Jones. George may have been close but not quite the status of Jones. Still, to be compared with Mark and Parnelli in any fashion is significant. George was very underrated by the press. They never made a hero out of him and he didn’t try and get on his own bandwagon. George was a race driver and it was hard to make a hero out of him.”

An early step up for George had been his choice by legendary team owner Roger Penske to partner Donohue in T70 Lolas in the 1967 Can-Am series. Penske remembered Follmer in 1972 when Mark crashed during a test at Atlanta after the season’s first race, breaking a leg and damaging his knee. The car was the awesome turbocharged Porsche 917/10 whose 900 horsepower the team had tamed just enough to race for the Can-Am Championship.

Penske’s choice of Follmer was second-guessed by some at Porsche. They urged him to consider drivers like Ronnie Peterson, Jacky Ickx, and Mario Andretti. Some at Penske were also unsure. Crew chief John “Woody” Woodard was among them, having seen Follmer make plenty of metal-to-metal contact in the Trans-Am. “I figured we would be hanging new sheet metal on the car after every race,” he told Madigan. “But when George drove the 917/10—I can’t say it loud enough—he ran all the races and never so much as put a ding in the paint,” Woodard added. “He was that good. Was George the fastest driver? I don’t know, but he was quick in my view. When Mark and he ran equal cars it was close. Mark was the engineer and could really set up a car. On the other hand George knew how to keep his foot on the ‘loud pedal’ and run as fast as it could run. He would figure out what he had under him and drive the wheels off it. He was a race driver from head to toe.”

In his interviews Follmer makes no secret of just how daunting it was to step into this awesome 917/10 and perform in it from scratch to meet the expectations of Porsche, Penske, and their sponsors. But he delivered by winning the 1972 Can-Am Championship, even though there were hair-raising moments along the way which, in Follmer-speak, “caused me to pucker up so tight you couldn’t have got a dime up my butt with a jack hammer.”

In addition to his late start in racing, Follmer was initially handicapped by a perception that he was a “small-car driver.” This arose from the success he had in 1965 when he raced a 2.0-liter Porsche-powered Lotus 23 in the U.S. Road Racing Championship. To even the odds for drivers of smaller cars, the SCCA gave the same points for placings in the under-2L class that it awarded to the big-car drivers. Follmer stole the Championship from Chaparral-driving Jim Hall in the series’ last race.

The Lotus-Porsche, the car that put George Follmer on the map, carried number 16. “The number 16 has always been my number,” he told Tom Madigan. “It makes you easy to identify. In my case the number 16 comes from my son’s birthday, March 16th. I liked the number and it always reminded me of my family.”

In a book that is essentially a compilation of interviews, each covering the period with which the subject is familiar, lacunae are inevitable. For example we are never told the identities of the 2.0-liter cars and drivers that Follmer beat to win the 1965 USRRC. We could learn more about George’s Champ-Car racing, including three Indy 500 starts, when he owned his own team. The reader has to piece the story together himself.

Many of the pieces, however, are fascinating. You will find an absorbing account of the extraordinary “knee-high” Mark 1 AVS Shadow Can-Am car that George drove in 1969 before handing over cockpit responsibilities to Vic Elford, famed for his salvaging of lost causes. You will also be invited into the equipment-crammed aerie of Don Nichols, the mysterious magus behind the Shadow cars that competed in the Can-Am and Formula 1.

Although excellent, the photos are all mono save an eight-page tranche of color from a 336-page total. From time to time the author betrays a lack of familiarity with this genre by misspellings of names. We have too many reminders that the author’s real interest is in drag racing. The episodic nature has already been remarked upon. But from it come valuable personal reminiscences of a lost era of racing and a driver who well deserves the title “American Wheel Man.”

The last word belongs to Bud Moore, ace NASCAR team chief who prepared Trans-Am Ford Mustangs for George Follmer: “I enjoyed working with George and we became great friends. Whenever I belted him in that seat I knew that nobody was going to get around him easy. Ol’ Roger Penske and the others all took notice when we showed up because they knew it was going to be a fight. When we went Trans-Am racing the other teams would say, ‘Who the hell is that rebel? Where did he come from?’ And then we would turn around and give out a beating. That was fun.” 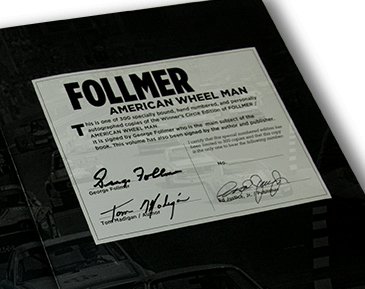 Bibliography, Index. The standard book is called the “Qualifier Edition” but there’s also a “Winner’s Circle” limited edition of 300 signed and numbered copies (Follmer has, of course no. 16!) covered in linen and in slipcase, each with nine photos applied to the outside. $150.

Also appeared, in different form, in the SAH Journal vol. 268.