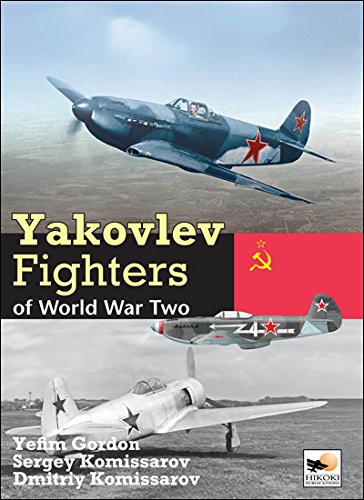 “All the Yaks proved to be cheap and well adapted to mass production; they could easily be manufactured by unskilled labour and did not require the use of strategic materials, which might be scarce. They could also be flown by pilots of very modest skills who had undergone hasty training during the harsh war years.”

No wonder over 35,000 copies were cranked out. And they looked good to boot, especially the later versions! A Yak-9 that fell into American hands in 1950 during the Korean war was thought to be “the nearest Russian equivalent of the North American P-51D Mustang.”

Anything worthwhile these days regarding Russian aviation seems to have the Gordon/Komissarov imprimatur. Gordon (with Dmitriy Khazanov) had already authored an in-depth 2002 book on the subject, Yakovlev’s Piston Engined Fighters (ISBN 978-1857801408), but apparently so much new material has become available for public consumption since then that even this newest book is not able to reflect it all. On that score having authors who know the full sweep of the material is crucial for prioritizing what needs to make into this first of possibly multiple books.

Largely based on company archives and other previously closed sources the book presents Yaks-1, 7, 9 and 3 in the grand detail and with the high production values that distinguish all this publisher’s offerings. With so many copies built and in several variants there are a great number of modifications large and small to track. The book also dispenses quite a bit of ancillary details such as nomenclature (including pronunciation guides) and type designations that easily bog down the casual reader. The latter especially applies to Yak machines because the military changed the normal naming conventions for political reasons after a Soviet statesman was executed for subversive activities.

Design, development, and technical/performance features of each model are discussed in individual chapters and operational highlights for all are bundled into one. Yak fighters in foreign service are discussed separately although it should be noted that the word “service” in the sense of fully integrated line duty only really applies to the various Eastern air forces that flew the type/s and not to the UK, German, or US services whose only use for the Yak was flight-testing a few captured aircraft. Even the French who actually received 40 factory-fresh Yaks as a gift of gratitude for helping the Soviets did not integrate them into their regular air force and mustered them out as early as 1947. Still, seeing these aircraft with foreign markings in color profiles will excite the modelers. There are quite a few color profiles (also of nose art and other markings), of mostly one scale, and a few of them show the main gear down. There are also a number of technical drawings, 3-views and cutaways, many of which from the Yakovlev archives.

Except for the assembly phase, most of the photos show whole aircraft exteriors not individual components, and mainly on the ground. Two chapters deal with restored/preserved Yaks in museums and airworthy replicas. The Index shows an entirely uncommon degree of planning in that it is on the hand quite selective but on the other, supremely thorough with the entries it does contain (cf., Yaks were built in many separate plants and each is listed separately in their own subsection).

Every review of a Hikoki book ends with the same sentiment: another fine, essential book. Collect them all and you’ll sleep better—and impress visitors to your library.