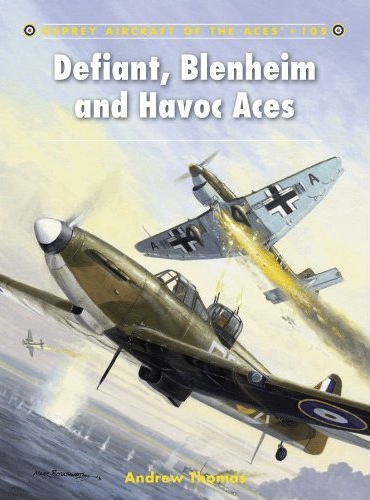 “Give us better aeroplanes and equipment—and bring us more Japs!”

(from a British combat report)

With over one hundred titles in this “Aircraft of the Aces” series publisher Osprey has the luxury of committing resources to addressing aircraft that are rather on the fringes. The common denominator for the three World War II fighters covered by this book is that they were not entirely or consistently successful in the roles for which they were originally intended, not so much because of inherent shortcomings but because the operational picture kept changing. It is a cruel irony that the makeshift roles they were pressed into—nightfighters and various ancillary tasks (cf. airborne searchlight, minelayers)—also were not a rousing success. In the end, pilots couldn’t wait to transition into the more competent and hence today better known Mosquito and Beaufighter.

American readers may need to be reminded that they may well know the Havoc, but under a different name. It is the US-made Douglas DB-7 light bomber that found its way to the RAF via the French. This book also covers, briefly, that plane’s predecessor, the Boston.

Small though they are, these 96-page books pack a big punch and cover a lot of ground. The focus is on operational conditions and requirements (all theaters; 264 Squadron plays a dominant role), each aircraft’s strengths and weaknesses in its original and its new role, all spiced up with a generous helping of often lengthy commentary by crew.

Thomas is an RAF man and has authored eight books in this series as well as several other books and numerous articles. Davey’s airbrush art has graced more than 30 Osprey titles. The cover art is by Max Postlethwaite, also no stranger to Osprey projects, and as always informed by deep layers of detail extracted from action reports.

Period photos, first-hand pilot/crew accounts, solid research, Chris Davey’s excellent color profiles (always a treasure trove for kit modelers), these books just don’t disappoint—as long as you don’t have unrealistic expectations (cf. no maps). The many photos have detailed captions, and all are credited. The color profiles number 36 and are bundled on 12 consecutive pages; detailed image information is appended, as is a list of aces on all three types.