The Story of Champion Race Car Driver John Paul Jr. And His Battle With Huntington’s Disease 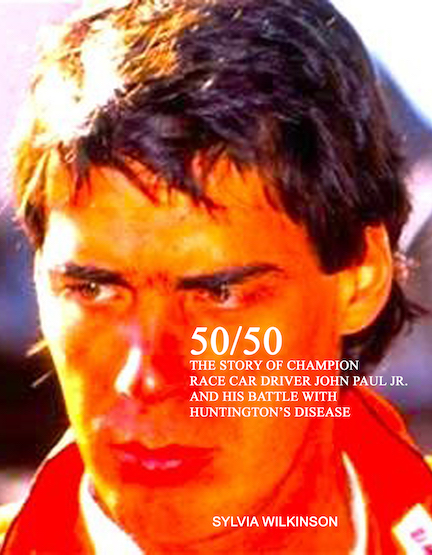 This is an unconventional book in so many respects. Visually, there’s the variation of type styles and sizes used. Page layouts feature text interrupted with “interjections” from others and “call-outs” each of which are sometimes in boxes with some background color but no border rule lines while others are just somewhere on the page. It feels a bit like you might be looking at a scrapbook that’s in the process of being assembled. And with no table of contents to give a reader an idea of what will be unfolding on the pages, as the book begins a reader may feel a bit disoriented. 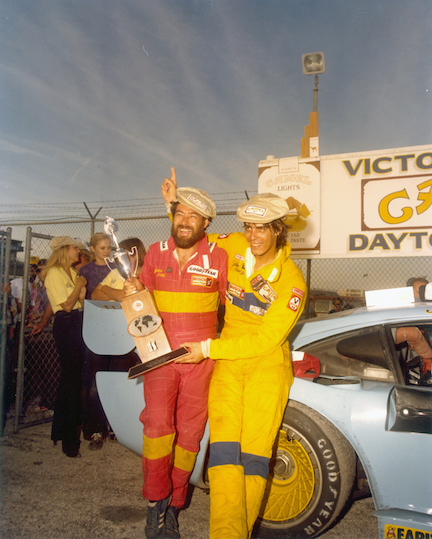 Then, almost as if by magic, the words of veteran writer and author Sylvia Wilkinson capture and captivate the reader so the story she’s telling in 50/50 gathers the reader in. Those skillfully chosen words tell the story of a naturally brilliant racecar driver, one whose life’s story is decidedly unconventional in just about every aspect—including, or perhaps that should be especially, his goal for his legacy, that which is now the ultimate purpose for his life.

That driver and the man who is the subject of 50/50 is John Paul Jr. The book’s title comes from a sad reality of his life, an inherited degenerative disease of the central nervous system that effects only about half of those who inherit the gene. And if inheriting something like this isn’t bad enough, those whom it “might” affect don’t know for sure until attaining the age 40 to 50.

The children of well-known singing song-writing chronicler of American life during- and post-Dust Bowl era, Woody Guthrie, perhaps best remembered for his American anthem This Land is Your Land, knew what it was like to have the specter of Huntington’s disease hanging over them for that is what had caused Woody’s early demise. But Arlo (a noted singer song-writer himself) Joady and Nora were fortunate as none have developed the symptoms. John Paul Jr., has not been so fortunate. 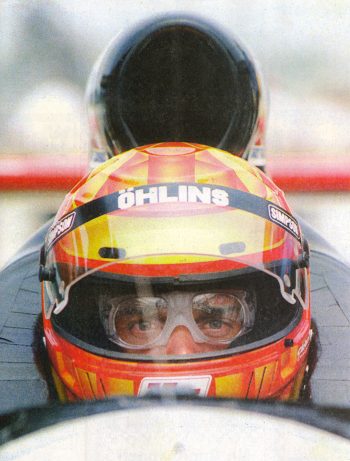 John Paul Jr.’s eyes convey the intensity of the race in which he’s running: the Indianapolis 500.

So having nothing—and everything—to do with John Paul Jr.’s life, what exactly is this insidious Huntington’s? Earliest symptoms are subtle. One begins “acting kinda funny,” maybe moody but just not “right.” Ultimately Huntington’s causes a loss of mental and physical control that eventually develops into complete helplessness.

In Guthrie’s lifetime all the medical community could do was care for him. In John Paul Jr.’s lifetime, UCLA is leading the charge with advanced studies in which he willing participates that seem to be on the cusp of offering real help as the gene that causes Huntington’s has been isolated and work is underway with some 21 clinical trials of existing neuroprotective drugs. And that’s what this one-time race driver has devoted himself to and what motivated Syliva Wilkinson to write this book with its title 50/50 reflecting the possibility of an inheritor developing the disease.

But Wilkinson didn’t just write the book. Along with her significant other John Morton—himself a noted and notable race driver (think of Peter Brock’s BRE Datsun-running efforts among others) and a one-time team mate with John Paul Jr.— they have underwritten production (printing and distribution) of the book. And they’ve designated the proceeds from its sales be directed and devoted to that UCLA treatment/cure research program.

At a young age as a race car driver John Paul Jr, was reckoned to be on his way to being among the top tier of drivers as he honed his natural talents with experience. He had the advantage of a wealthy father as team owner and sometimes teammate driver and they compiled a winning record in IMSA. But that same dad also was into drug smuggling and when arrested as complicit in his dad’s activities, John Jr. refused to testify against his father so spent time behind bars. That’s not a good interruption for the career of a promising race car driver to experience, even one who had won his fourth ever drive in IndyCar.

So Jr.’s first child was 18 months old when he entered the minimum security prison and turned four about the time he was released. And, defying common perceptions, he was able to resurrect his driving career, albeit with some handicaps. John Paul Jr. wasn’t the first choice for top drives with top teams and therefore achieved in what was sometimes less than stellar equipment. Despite, or perhaps in spite of, challenges he compiled yet again a fine record including qualifying seven times for the Indianapolis 500 and wins in IRL and World Sports Car (the series that had replaced IMSA). And no one, ever, heard him utter a word of complaint. There was no passing the blame to team or car or mechanics!

John Paul Jr.’s demeanor and racing abilities earned the respect, admiration—and perhaps most importantly, the friendship—of other respected racers including one who is an equally statuesque driver (both standing multiple inches in excess of six feet), Tommy Kendall who has high words of praise for John Paul Jr. indeed; “Most drivers, including a younger me, could learn a thing or two from John on taking responsibility and how to carry themselves with humility and a certain dignity when things don’t go their way. And, for what it’s worth, he carried himself in exactly the same way when things did go his way.”

For now John Paul Jr.’s goal is to do all in his power to aid the medical community in its effort to find treatments, even a cure, for Huntington’s. You too can help. Add a copy of this book to your library and learn of the man who inspired it. You can help even more directly at giving.UCLA.edu/JohnPaulJrHD

No index, no table of contents but chapter footnotes citing media references and photo credits as well acknowledgement sources.