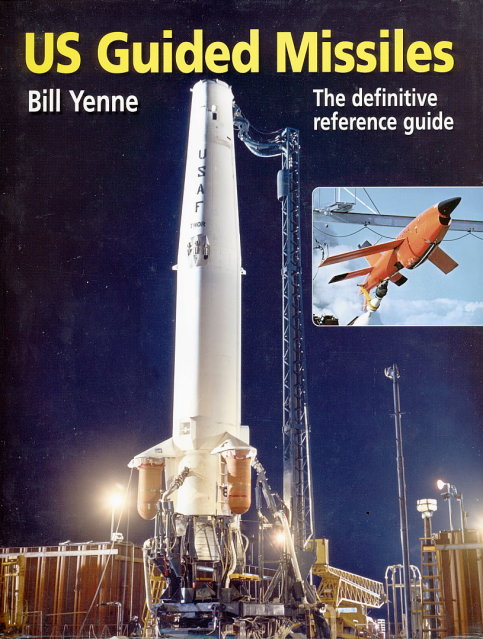 “This book is designed to fill a gap in the literature of military hardware.” Thus begins the introduction to Bill Yenne’s latest book. That gap in the literature being referred to is, of course, the topic of guided missiles of the United States military. While there have been books in recent years dealing with “B” for bombers, “X” for experimental and “F” for fighter, “M” for missile has seemed to be something of an afterthought in this literature. Scanning my own groaning bookshelves dedicated to aviation topics, the number of books devoted to missiles—of any sort—are very few in number and most are from the distant past.

Another gap that Yenne fills is not readily apparent but becomes blindingly obvious once you realize it: this is a proper reference book that you can hold in your hands, not a website that you stare at on your computer screen. That in and of itself makes this offering remarkable. In this day and age where digital reigns, it is heartening to see that even a data-intensive compendium such as this is being done in book form.

The bulk of the book is devoted to covering over 175 missiles under the “M” (missile) designator that came into use after the Department of Defense created a unified designation system for Army, Navy, and Air Force aircraft and missiles in 1962. Beginning with the Martin MGM-1, the Matador—which originated from the MX-771 project and began life as the XSSM-A-1, was then redesignated as the XB-61 and TM-61A before finally becoming the MGM-1, which translates as Mobile Ground (Surface) attack Missile 1—to the MQM-175, a proposed aerial target vehicle built  European Aeronautic Defence and Space Company (EADS) being evaluated by the US Army. The reason to spell out the MGM-1s various iterations is not to show off but to illustrate that one piece of equipment may be known by a number of designations and that a book that didn’t capture them, especially in the Index that is so crucial for a reference-level book, would be deficient. No worries here!

In the Introduction and in three Addenda and five Appendices, Yenne provides information on the various designation systems used before the “M” designator was created as part of the 1962 MDS (Mission Design Series) system that has been in place for a half century. The addenda cover topics such as: a look at various “classic” guided missiles (the Snark, Rascal, and Navaho); operational guided anti-missile missiles; and the lineage of the “R” (for rocket) designation for unguided weapons. The length of entries ranges from half a page to several pages and, with few exceptions for “less important” articles, at least one photo for every type actually built is offered. Listologists should know that the book references only those unbuilt projects that were assigned a number but were then cancelled before production.

While one can—and probably should—quibble whether or not this book is indeed “the definitive reference guide” for US guided missiles, what is readily apparent is that is certainly an excellent guide to a much neglected area in the literature of military hardware. Yenne does fill a gap and does an excellent job of covering the familiar, but particularly many of the newer systems. For instance, I, even though I am around military hardware, did not realize that the RQ-5 Hunter had formerly been designated as the BQM-155. Likewise, the rather confusing—at least to me—way the Navy refers to the family of Standard missiles (SM-1MR, SM-3, SM-6) in relationship to the “M” series was cleared up in Appendix 4 (RIM-66, RIM-161 and RIM-174, respectively).

Although Yenne does often address the variants of each missile in the discussion section, in many cases it would have been nice to have a table to help sort them out, especially in cases such as the long-lived missiles like the Sidewinder, Titan, Falcon, and several others. That is, perhaps, the Anorak in my soul speaking. There is almost a compulsion for some (of us…) to know the correct nomenclature of aircraft, missiles, and other military hardware. While this book might leave that half of one percent wishing for more and more data, this is an excellent reference guide for petty much everyone else.

Very highly recommended not only for Bill Yenne’s excellent work, but also because one senses that the likelihood of future editions in book form are, sadly, somewhere between slim and none.

Yenne has an enviably long and varied list of good books to his credit, from similar aviation titles to highly acclaimed biographies of leadership figures like Alexander the Great and Sitting Bull. If your interests run a different direction, check out his books on the history of beer and brewing, or his several novels/westerns/action-adventures, or TV documentaries, or. . . . In Yenne’s case, the ability to don different hats does not result in dilution but concentration and well-crafted, engaging writing.

The Pointblank Directive »
« Lichtenstein, A Retrospective