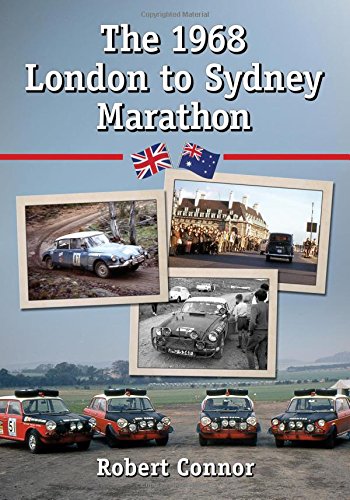 More than 250 people from 19 nations plunked down a modest (even then) $1100 starting fee and strapped on their cars for an unprecedented speed/enduro rally crossing ten countries, including one sea leg. Why? Because “it’s time this country had an adventure!” And because £10,000 awaited the first across the line—a pound a mile.

Of 98 cars to start, 56 arrived and this is the story of some 60 of them. Author Connor has had a life-long passion for all things automotive and his first awareness of the Marathon came about by means of a toy rally car, complete with plastic kangaroo, he was given as a child in 1969. Decades later, searching for another toy car, he came across a period photo that so intrigued him that he wanted to read up on this grandest of events of his youth—only to discover that no one single account existed. So he sharpened his pencil, ran up a big telephone bill, and put in some miles of his own to gather the recollections this book, his first, weaves into a highlight reel of the run-up to the rally, the epic drive itself, and the four reenactments in later years.

Considering that the rally drew what is now believed “the largest live audience for a sporting event” ever it is odd that it has taken so long for a book like this to come about. Almost everything about the event strikes the modern reader as wildly unusual, from its conception over “a boozy lunch” (who knew that a few glasses of low-octane port wine could induce such a state!) to its rudimentary logistics to, not least, the utter flat-footedness of the marque that won the race—and was so surprised by that feat that it could barely get its act together to get any PR action out of the win.

Connor is a Brit, and as a young child at the time of the first running of the Marathon realizes that time and place are crucial factors for understanding today why this utterly implausible event made perfect sense to those folks who saw “Britain’s morale flagging in the face of prevailing [economic] gloom across the country.” While he does not say it, that quintessentially British “old boys” mentality is just as crucial. Many names from the society and sporting pages play a role, such as Tommy Sopwith (saloon car racing driver and son of the inventor of the WW I Sopwith Camel fighter plane) who was tasked with working out the logistics, or Sir Max Aitken, proprietor of the Daily Mail newspaper who became the lead sponsor, a role the paper had played so many times before in the history of record-setting (and national prestige-enhancing) events, or Autocar magazine editor Innes Ireland who participated as one of several journalists.

Long overdue, the book is a fine tribute by a wholly enthusiastic chronicler who full well realizes, as do the many participants he was able to interview, how unique the Marathon was. Even the reenactments never surpassed it, nor do any of the other modern-day long-distance rallies.

For a McFarland book there are rather a lot of photos, some even in color and there is a quite thorough index.