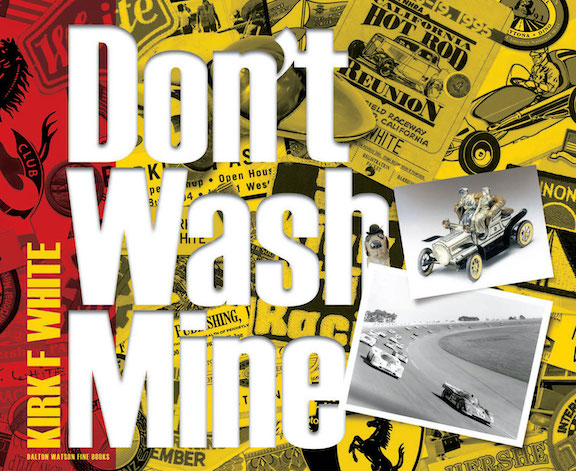 If the name Kirk F. White is known to you, it is highly likely that you are already reaching for your wallet in order to read his story in this, his book, for it is told as only Kirk could or would tell it. If, however, you’re unfamiliar with his name, read on and “meet” this eclectic car-centric gent.

White knew from his very earliest days that he wanted cars to be an integral part of his existence. So, with one thing leading to another; tether cars to real cars, attending and competing in the 2nd NHRA Nationals in Kansas City in 1956, followed upon by the “Lure of European Sports Cars” that morphed his selling life insurance into selling sportscars, then exotic cars. By the mid-1960s, he was associated with the Nyak, New York Vintage Car Store, Inc, “dealers in thoroughbred motorcars” which led (nearly) directly to racing sponsorship fielding the Penske/Donohue Sunoco Ferrari (formerly the Chris Cord/Steve Earle, Doane Spencer-tuned Ferrari 512S).

Penske and the Kirk White-owned and -sponsored Ferrari were Le Mans contenders in 1971. That reference sent me to the pages of Tim Considine’s Yanks at Le Mans and, sure enough, in Volume 3 the chapter on 1971 has words and photos including one image that includes White. But, oh my, his choice of apparel in that photo can only be described as, um, noticeable: a decidedly bright pink shirt atop iridescent lime pants.

If you get a sense from the above this is about to become a who’s who of the auto hobby and a succession of “hot” collectibles—you are absolutely spot-on.

Don’t Wash Mine is fast-paced, written as though you and Kirk F. White are sitting together visiting. He’s good company, telling his story in a light-hearted, sometimes self-deprecating way so there’s lots of laughter as there will be reading his book and in which you’ll even learn the origin of its title.

White began recording his stories “about remarkable characters, legendary automobiles, and once-in-a-lifetime deals [he] encountered over a period of some sixty years” at the beginning of 2016 and posting what would become chapters as blog installments.

Replying to my inquiry, publisher Dalton Watson indicated, “We were approached when the online work was more or less finished. We visited [White] just about the time he wrote his last chapter in Florida after [2019] Amelia Island, not expecting him to die so suddenly. (White’s life spanned February 1938 to March 2020.) David Williams of Prancing Horse had been working with him to lay the blog out into book form. The book is unvarnished Kirk. At his request, no changes were made to the language…Need I say more!!”

Williams is obviously a professional as the book’s pages are generously illustrated and attractively presented with only a minor uncaught typo here and there—and one page order curfluffle—none of which detract from the book whatsoever as the story is that well told.

One item—that has the potential to become bothersome if one wants to find again a particular reference to a person or an event—is the lack of an index. But with this head’s up a reader can partially remedy that oversight. Before you begin to read, fold a sheet of paper lengthwise forming two columns per side. Write the letters of the alphabet leaving several lines between each letter, A to K on one side and the rest on the other. Then, as you read a name or incident or event it can be noted with its page number(s) on your self-created index. It may not be as detailed as one professionally created, but is certainly better than none.

And that mentioned page curfluffle: just read the properly sequentially numbered pages in this order: 301, 303, 304, 302, 305 and all will be comprehensible.

At one point as he followed up on an article in Hot Rod Magazine, White became involved with speed record seeker Al Teague; another grand story with a “reality check” as part of it. At the period in time when White was writing of his Al Teague experiences, he happened to also pick up and read a 2010 issue of Octane which carried an article about the Bugatti Veyron setting a world’s production car record of two-hundred-and-sixty-seven-point-eight mph and couldn’t resist the observation that Al Teague had achieved that with his hot rod eons earlier. And, oh, by the way, Teague’s hot rod hadn’t cost anywhere near what a Veyron did—even adjusting the dollars to reflect the nearly forty years twixt and ‘tween.

Then for a nearly complete change, White became fascinated with automotive tin “toys,” those that were beautifully produced by Märklin and others. By the 1980s he’d assembled his own wonderful accumulation of those marvelous hand-painted tin cars, and trains, and boats, and ships, and more.

As you might imagine the above barely touches on all that Kirk White lived, experienced, and did over his lifetime. Motorcycles were involved too—especially Vincent Black Shadows and others of that ilk. And Kirk is credited with having staged the first ever vintage motorcar auction.

Enjoyable reading awaits you and, with your self-created index, you’ll be able to go back and revisit people and events of Kirk White’s life’s experiences again and again.