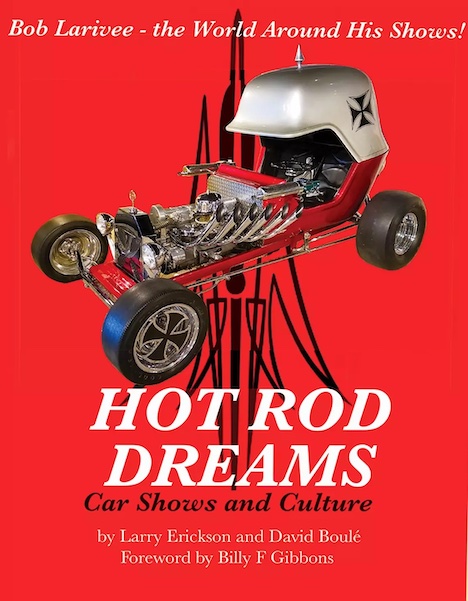 Three men, with very disparate backgrounds and abilities, came together to create this engaging—informative, instructive, entertaining and easy-on-the-eye—winner of a book.

Larry Erickson, listed as the book’s author, is really the designer and magician who created the appearance of each page, artfully merging content and imagery. David Boulé put his marketing and communications skills to work smoothing and slightly growing the words written by the third man at his typewriter—yes one of those devices with a platen. That man, Robert Larivee, Sr., is who the book is about. It is his memoir, but so much more as it is also a factual, thus real, look at, as the subtitle indicates, Car Shows and Culture.

Of Robert Larivee Sr—“Bob” to all who know him, including (full disclosure) your commentator—it has been said that, “Very few people are able to create their own job” and especially “one that they love and [ that concurrently makes so many] others happy while doing it.” But that’s exactly what car-guy since a toddler, Bob—now in his nineties—did and still does.

Bob Larivee created “an empire [showcasing] style, color, chrome, horsepower, pop culture and fantasy” at events he conceived and staged. Those shows called AutoRamas and World of Wheels now are staged under the auspices of another Larivee creation, the International Show Car Association (ISCA). These shows helped define part of the American car passion even as they also fueled dreams of so many all around the globe. 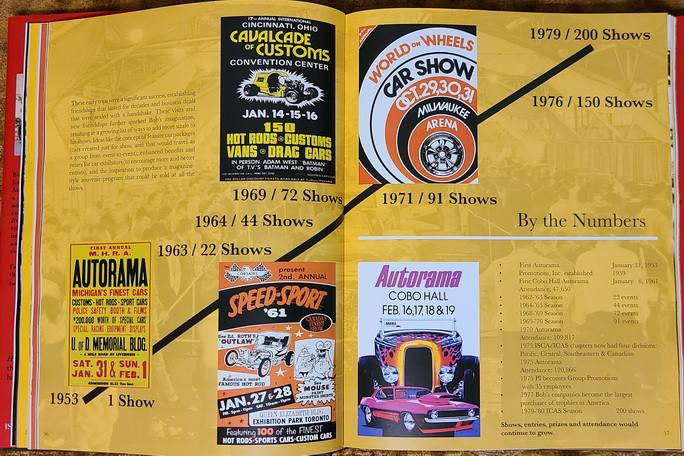 A visual timeline of Larivee-created and -produced shows from the first in January 1953 through 1979. What these pages don’t clearly indicate but is true, in 2021 Bob still produced shows!

The entire book essentially is Bob Larivee reminiscing on his lifetime of experiences and he especially remembers some particular people. Larivee’s  characterizations of, and words about, people like Ed Roth and George Barris are personal and thus his insight into them is different from what’s presented in many articles and books. His words on Blackie Gejeian, a fellow show promoter and hot rod builder par excellent, are just exactly right for that man, whom I also knew and always found such a joy to be around.

Larivee’s friendship and admiration for Bill and Joyce Smith comes through loud and clear—especially as you read/realize that so much that Bob himself collected over the years has now been donated to, and is on display, at the museum established by Bill and Joyce; their now the enormously respected and special place called the Museum of American Speed in Lincoln, Nebraska. And what’s not to like about having the foreword written by another of Larivee’s intimates, ZZ Top’s Billy Gibbons? 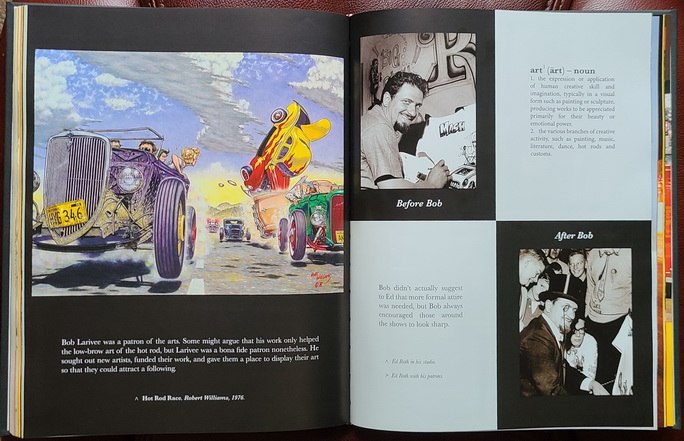 Ed “Big Daddy” Roth on the right hand page, at work in his studio above and, bottom, with fans at a Larivee-produced show. There’s a special story behind Roth’s top hat as you’ll discover on the book’s pages. Artwork on the left is a Robert Williams creation. Williams is but one of the accomplished artists whose works Larivee promoted.

All of the shows sanctioned by ISCA were organized to be wholesome entertainment for the whole family. To keep them fresh year after year, in addition to the show cars and those competitively entered by individuals, live entertainment, celebrity appearances, and more were always part of shows for “finding extra added attractions was essential to keeping the arenas packed.” Early- to mid-60s slot car racing was just catching on and the photo below captured “Even a grown up like [then] Senator Robert Kennedy was intrigued by . . . these incredibly quick little cars [that] thrilled the kid in everyone.” 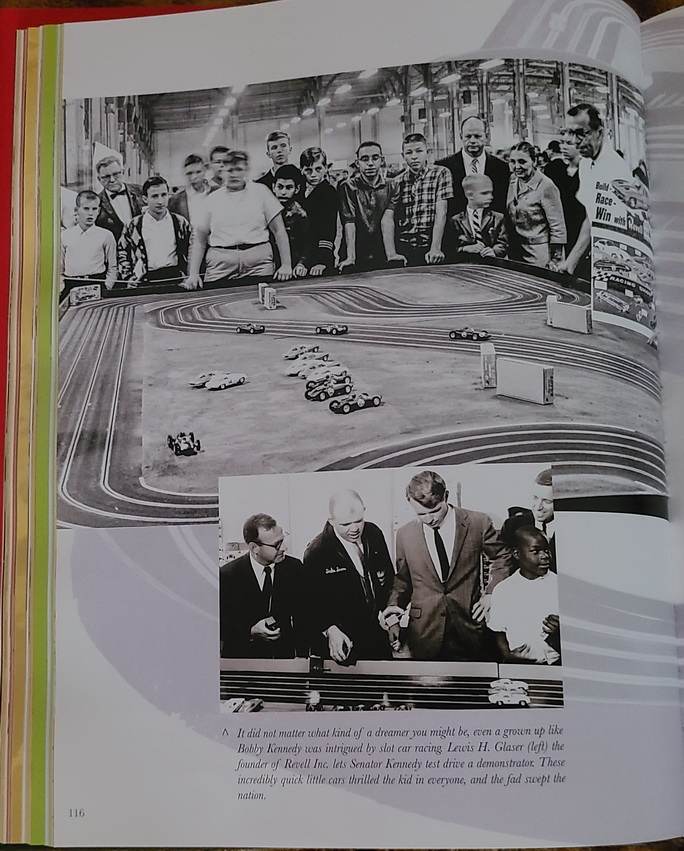 Cars—all manner of cars; all shapes, all sizes, all years representing all facets of the industry, the hobby and motorsports—have always been an integral part of who Bob Larivee is, what he does, who he knows, what he reads, and the objects he’s collected. But eclectic as his car interests are, one vehicle did totally captivate him. Moreover, when it first captured him it was not a real, driving car but a Monogram model.

Artist/designer Tom Daniel, wanting to pay tribute to the World War I Red Baron airplane, created the model that inspired Larivee to subsequently commission it being built as real, rolling stock. The Red Baron T-bucket roadster was displayed at many ISCA shows all across the land and today lives in the Museum of American Speed. 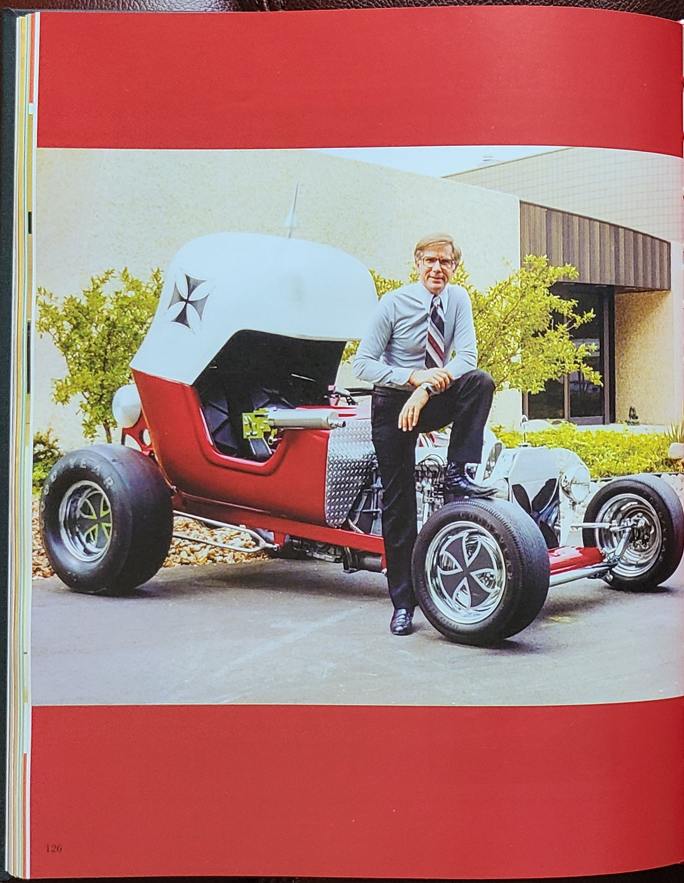 The man with his car! Bob Larivee and his Red Baron model-come-to-life T-bucket roadster. The car also illustrates this book’s dust jacket. 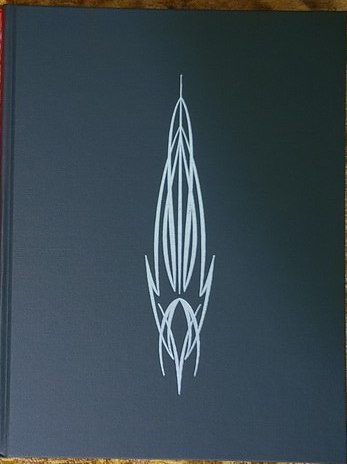 Always take a peek under the dust jacket . . .

Fully realizing that this phrase is associated with another much beloved entertainer named Bob, it is, nonetheless, absolutely appropriate here too and especially relevant to this book: Thanks for the memories. 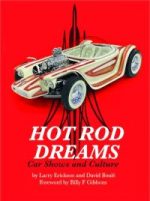 Note: while there is but a single version of the published book, it comes with two different dust jackets; one has the Beatnik Bandit show car (left) and the other features the Red Baron show car. Bob Larivee specifically wanted a personalized version to use when he makes appearances at shows, etc. His all-time favorite car is, as you read in the review, Red Baron. So that’s on one cover. Beatnik Bandit was Ed “Big Daddy” Roth’s most popular creation and it is the feature of the other dust jacket.