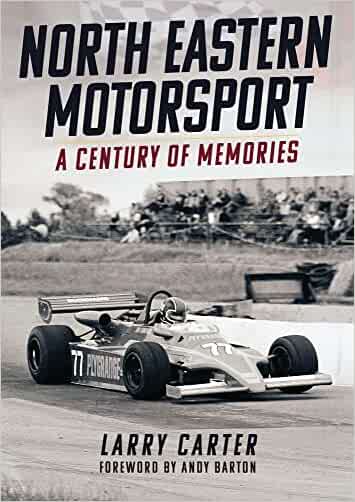 “People who live in London and the South East of England often joke that ‘It’s Grim Up North.’ This  book proves that, when it comes to motor sport on two, three and four wheels, the North East was anything but grim.”

There aren’t many things to thank COVID-19 for but this book is one of them. Larry Carter is a motorsport journalist based in the North East of England and, in the early months of the pandemic, he produced a series of retrospective pieces for his local newspaper, the Darlington and Stockton Times. They were a welcome relief from the catalog of doom that made living through the early months of 2020 feel like a horror movie. The success of the articles inspired the author to write this book, which incorporates a foreword by local racer Andy Barton, who died earlier this year.

The book is a snapshot of twenty events, on two and four wheels, which took place in the North East of England. Many disciplines are covered, from car and bike racing at Croft Autodrome (as it was then called) to motorcycle trials, rallycross, grass track and even sand racing at Saltburn and Redcar. That’s a lot of diverse material to pack into a mere 96 pages and, while the author succeeds in doing so, it comes at the expense of a central narrative or a wider perspective on the local scene.

The style is breathless and punchy ‘“journalese,” which might suit the book’s purpose but did sometimes grate with this reader. A rigorous editor would have tidied up some of the clumsier prose. There are some factual errors too—Lewis Hamilton took his first single seater victory in a Formula Renault race at Croft, not in Formula Three, and although Topcliffe did host sprint meetings it never featured circuit racing per se. There’s also an implausible claim that Jackie Stewart took his first victory at Croft in 1963 in a Jaguar E-Type when in fact Stewart had started winning two years earlier, in the ugly little Marcos Xylon GT. I also raised my eyebrows when I read that Brian Redman had apparently enjoyed a stint in the Ferrari works F1 team. I bet that was news to Brian. These mistakes don’t really detract from an entertaining read but there is a sense that this book was rushed out without sufficient background research. 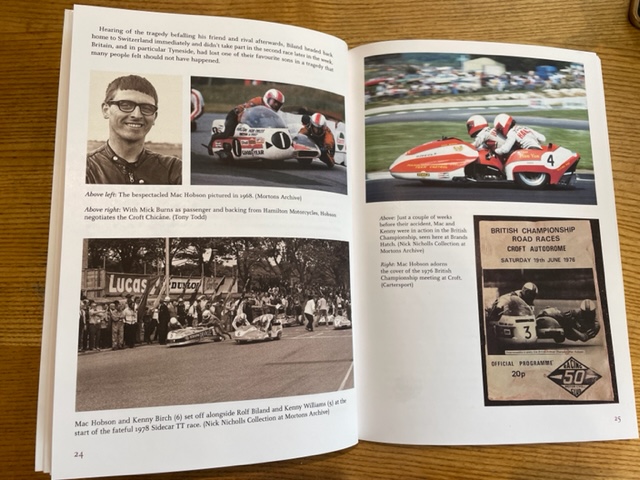 In mitigation, the book does add color to the forensic research that Julian Hunt undertook for his authoritative work, Motor Sport Explorer. That book did not cover off-road events but its extraordinary level of detail on speed and circuit venues still stands as the definitive book on over a century’s worth of British motorsport venues.

Although I attended many of the events described in North Eastern Motorsport, including the legendary Formula Three meeting in 1970 (in which I made my marshalling debut), what I found rather more interesting were the chapters about the areas of the sport outside my core interest. Hence I enjoyed the accounts of speedway and grass-track racing, including at two sites only a few minutes’ drive from my home. I also missed out on the heyday of stock car racing, where Hartlepool race promoter Warren Taylor once obtained a sponsorship deal with United States Tobacco International’s Skoal Bandit brand. The consequences were surreal: “. . . arriving at a windswept North East . . . complete with the chill of the North Sea, were NASCAR driver Harry Gant, complete with 10-gallon cowboy hat, and Grand Prix motorcycle racer Rob McElnea with his immaculate Suzuki RG500.”  Things got weirder still when Indy car star Tom Sneva also appeared. As Carter puts it, “his satin white jacket with the Skoal masked bandit logo . . . wasn’t really in keeping with a hard-working northern English industrial hub, where local authority donkey jackets were more the order of the day.” I only wish I’d been there to see it for myself.

The book is reasonably well illustrated, with some charming and evocative period shots, but for anyone unfamiliar with the region a map would have made a big difference. Readers would also have benefited from an Index.

I don’t follow motorcycle racing with any real interest or diligence, but names such as sidecar star Mac Hobson and Norton rider Ken Redfern were already vaguely familiar to me, and I enjoyed reading their stories. Both ended tragically, Redfern dying in a road crash, while poor Hobson was killed with his passenger Kenny Birch during the Manx TT. Perhaps it is the sheer frequency of deaths in motorbike racing that is the cause, but it is noticeable how that branch of the sport commemorates its past heroes much more than car racing does. Or maybe it is a sport with a greater awareness of and respect for its heritage than its brasher counterpart? 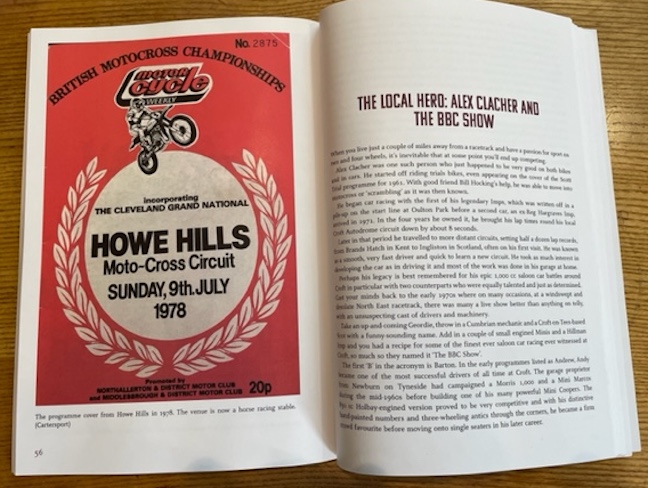 The North East of England has never enjoyed the affluence of the South, despite its mining, shipbuilding, and engineering industries having powered the Industrial Revolution and the British Empire. Since the 1980s it has suffered from serious economic decline, despite the (often perfunctory) efforts of successive governments. But its people, Geordies from Newcastle, Teessiders from Middlesbrough, and Dalesmen from North Yorkshire are tough, resourceful and enterprising, all vital qualities in motorsport. Although the North East is most famous on the national scene for its special stage rallying, with legendary venues such as Dalby Forest, Hamsterley, and “Killer Kielder,” Larry Carter’s book shows that the region deserves recognition for a host of other disciplines too.

And there’s been no shortage of heroes either. I was witness to many of the legendary saloon car battles between Messrs Andy Barton, Alex Clacher, and Sedric (sic) Bell—even though some names, such as international sports car racer Brian Robinson, are surprising omissions. And only the briefest reference is made to larger-than-life local racers Tony Dean and Chris Meek. The former was the only Yorkshireman to win a Can-Am race, and the sight of his Road Atlanta-winning Porsche 908 dispatching all comers in Croft Formula Libre races was unforgettable. As for Meek, if anybody epitomized the louche and lairy Seventies, it was the Leeds property magnate with the (suspiciously) raven black hair and the coterie of hot girlfriends.

The book is a must read if you are local, and if you live elsewhere, you will find it an entertaining, if brief romp through some local highlights. But the definitive book on the subject has yet to be written.

by Larry Carter, with foreword by Andy Barton

Posted Under: Racing, Rally | Author: John Aston | No comments yet