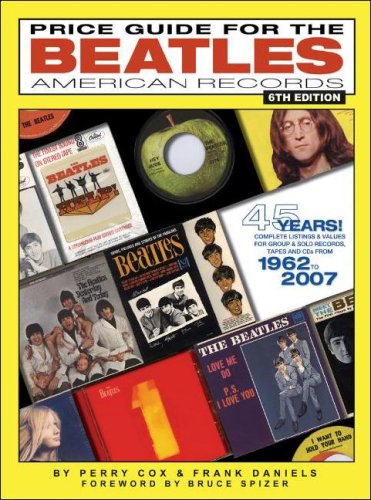 Perhaps you recall seeing an image of it in passing. Perhaps you are a Beatles fan familiar with the Butcher Cover of the LP Yesterday and Today. The Mop Tops are wearing white butcher smocks surrounded by naked, broken baby dolls and slabs of raw meat. John Lennon said afterwards that it was their reaction to and a statement about the Viet Nam War. Unsurprisingly the cover was quickly withdrawn from the marketplace to become, as the years spun on, highly collectable. The replacement cover shows the boys, cuter, more innocuous, with a steamer trunk as a prop. The original Butcher Cover is one of the most sought-after of the Beatles-related output. A near-mint condition stage one example (the stages are explained in the book) can fetch upwards of $4000.

Like most everything else, collecting and collectors can be placed on a continuum. Casual collections—someone with a nostalgic interest in The Beatles may have kept a dozen 45 RPM records and some battered LPs from his youth. These may be indifferently stored and occasionally brought out to peruse, perhaps even to play on an old turntable. Others down the line may have a dozen 45s with their picture sleeves, stored in Mylar outer sleeves and acid-free boxes, organized by original release date. Some may be early pressings saved from the collector’s adolescence, others may be later pressings found at a yard sale or online. And then, cutting in close to the extreme end of the continuum, close to the bone marrow, you have those who take their Beatles record collections quite seriously. These are the hard-core collectors, knowledgeable, having an eye for minutiae, perhaps born with a healthy dose of OCD. For them this book with its minutia could very well be biblical. And although this is a price guide with a graph showing how certain blue chip Beatles records have outperformed the Dow Jones and a listing of fifty-one items valued over $1000 (one variant of “Ask Me Why”/“Anna” on the VJ label is valued at $24,000), I am not so sure that for the truly serious collector, as opposed to the investor, bane of the true connoisseur, profitability is the driving force. 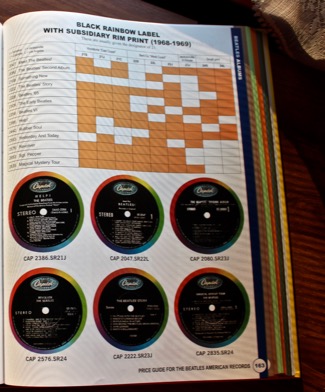 True and serious collectors experience several overlapping gratifications. One is the satisfaction found in the deep knowledge of the very fine differences found in the varieties of any given recording object. Was the disc manufactured on the East Coast or the West? In the minute script at the edge of the circumference of the label, is there a Capitol Dome Logo—or not? Which font was used? What is the size and color of the font? What are the subtle variations of the label’s background color? Can you discern George’s shadow? Are there messages, initials or codes inscribed by hand, originally, in the black—or, better, colored—lacquer at the end of the groove?* Is the outer sleeve for a rare 45 cut straight across or is there a thumb indentation? 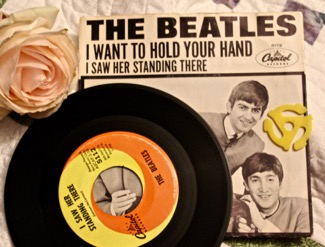 There too is the trophy successfully won after the hunt, perhaps after years of searching, waiting for that singular item to finally appear at auction and outbidding others for the prize. Or better yet, finding it in a dusty box filled with old records in some dingy antique-cum-junk shop—and finding that the shopkeeper does not realize that this particular pressing is one among a limited few. And even as it defies rationality, there absolutely exists the desirability of something that only a handful of others can possess. Its commonplace sister object may even be more attractive than the one found in smaller quantities, but the scarcity adds a commanding if elusive value.

Are we hardwired to the need to obtain all in a given series? Consider the gap that exists, both in the collection and in the mind of the collector, if numbers one, two, three, four and six have been gathered but number five remains unfound. Consider the Good Shepherd. It would not matter if number five is somehow inferior to the rest; its absence becomes a focus of necessity. Again there is a taint of irrationality here, but that is beside the point. And there always is the aesthetics of the collection. Putting the consideration of all of these other factors aside for the moment, there has to be in the significant portion of the collection something beautiful or enigmatically compelling.

These objects have become fetishized. 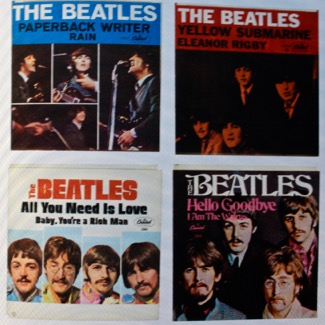 Like something from a textbook on accounting there are many charts and graphs. One set of graphs in particular we are still attempting to decipher and profit from, concerns itself with the various product differences among the various record manufacturing plants. One informational category here reads that certain printing variations are only “suspected” of existing. Production numbers are discussed—in the dual sense of the word. The article on the acetate and its manufacture, along with its breakdown of the disc manufacturing process altogether, is clearly written. Differences, some minute, found in the construction of a pasteboard LP record jacket (With a slick? Image printed directly on the pasteboard? How wide is the slick overlap on the inside of the cover?) fascinate; the constant reminders to beware of counterfeit discs underscores the fact that there lurk throughout the hobby exploiters and confidence-folk** intrigue; and even though the book falls outside of the world market (imagine the seemingly uncountable variants known or suspected available there!), the number of different American labels and the quantity of variations among them astound. The various tape formats are listed, as are all of the Apple recordings from all of the label’s artists, and Pete Best, the unluckiest drummer in pop history, is remembered and duly catalogued.

Storage tips are given: Don’t forget to change your protective plastic outer sleeves every three years to avoid long-term chemical reactions. Separate the disc from the picture sleeve to avoid ring wear.

This newest edition, the 6th, is of better quality than the previous editions, at least in the layout and the graphics of the book. All pages are in color, the previous editions having a central color section only. The heart of the book, the many pages of categorization, shows the sure hand of graphic artist Diana Thorton. Throughout, the book looks good. The front endpapers show a grouping of 45 RPM picture sleeves, the back endpapers show the albums. The front and back covers (there is no dust jacket) could be less busy. It is disappointing that the book’s outside is not quite as neat and attractive as the inside pages.

Getting back to the continuum, this book can be appreciated by even those who do not own even one phonograph record, as it makes for hours of contented browsing. And, as is its function, it fulfills the needs of any collector, no matter where she/he may fall along the continuing line. Cox and Daniels offer examples of detail and ephemera to satisfy any level of interest for anyone anywhere on that line. As always, we honor the daunting task of research, the sheer physical work of it all; the whip of accuracy; the raw joy Cox and Daniels, along with their brother-in-arms Bruce Spizer (who wrote the Foreword), must surely feel when finding something new or when locking down that final proof to dispel a pointed scholarly disputation. Yeah (three times).

* On some of The Ronnettes discs, Phil Spector had inscribed “Phil-plus-Ronnie” in the space surrounding the runout groove.

** Lets just beg the question as to why a disc so well counterfeited that only a detail-driven expert can tell the difference between it and the real thing is generally of lesser value than the real thing. And, to confuse matters, what if the counterfeited ones were far more rare than the authentic disc? As collectors often, especially those far into OCD overdrive, value scarcity, this situation would be confounding: Authenticity or Paucity? Like looking at a picture hung askew of the Leaning Tower of Pisa.