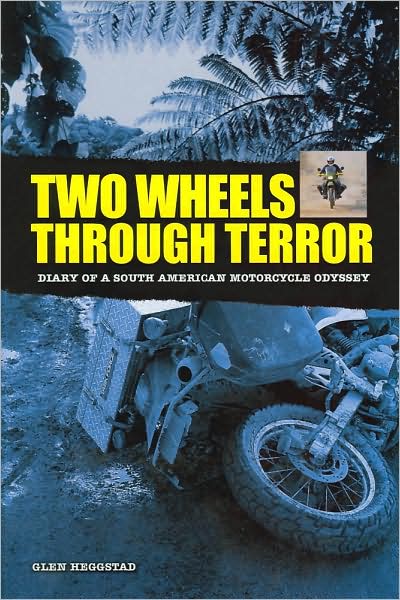 Less than three weeks after the September 11, 2001 terrorist attacks on the World Trade Center, Glen Heggstad left southern California on a motorcycle trip. His intent was to ride through Central and South America to Ushuaia in Tierra del Fuego, the southernmost city in the world, and then return back home again. His dream was not an unusual one—the route through Latin America is a well-traveled one for motorcycle adventurers. He’d done his homework, researched the places he would be visiting and had prepared his motorcycle for the rigors of third-world travel. Although the tragedy of 9/11 weighed heavily on his mind, he figured that if he didn’t go on his long planned trip, the terrorists would win.

The first part of the trip, through Mexico and Central America was reasonably uneventful, aside from the usual dangers posed by unpaved roads, poorly driven buses and food-borne illnesses. Heggstad clearly enjoys travel in Mexico and his warmth for the country’s rural population comes out through his writing. Working his way further south, he finally ends up shipping his motorcycle across the impassable Darien Gap to Bogotá, Colombia.

He had been warned that Colombia was dangerous, due to several guerilla insurgent groups operating in the countryside. He decided to try for a cross-country dash, a decision that on November 6th, proved to be a grave mistake. Heggstad was pulled from his motorcycle and captured by the Ejército de Liberación Nacional (ELN), Colombia’s deadliest rebel army. The group financed its activities largely through kidnapping and the AK-47-toting guerillas looked at an American hostage as pure gold. It was the beginning of a five week nightmare—the rebels provided him with only enough food and water to keep him barely alive, moved him almost constantly and beat and tortured him. His description of his treatment at the hands on the ELN is not for the faint of heart. Heggstad, who is a martial arts instructor, used his training to maintain his sanity, even while his body was wasting away under the constant assault. Near death, he takes a desperate gamble with his life that ultimately results in his release.

Perhaps the most amazing part of the story is not that Heggstad survived (he was traded to the Red Cross) but that following his captivity and in poor physical condition, he refused an offer by the US State Department to bring him home, preferring instead to stay in South America and continue his trip. His friends in California arranged for a new motorcycle and equipment to be sent to Ecuador, and after some minimal physical and psychological recuperation time he picks up his travel narrative, traveling through ten countries over the next six months and finally returning home to California in June 2002.

Heggstad, who is known to motorcycle adventurers (AdvRider.com) worldwide as the “Striking Viking” is a good story teller with a nice sense of pace and an occasional habit of understating the trials and tribulations he experienced. His mental and physical toughness is tested time and again, tests that not everyone might pass so successfully. During his trip he had regularly posted updates to a web site and he used these short missives to build his book. Unfortunately this occasionally leads to some choppiness in the narrative and occasional repetition from chapter to chapter.

Following his South American adventure, Heggstad sold his possessions, packed up his bike, and set off on a trip around the world. This adventure became the subject of a National Geographic documentary and resulted in another book in 2009 titled One More Day Everywhere: Crossing 50 Borders on the Road to Global Understanding. An ability to relate the complex emotions that come with extended travel in foreign places, so aptly demonstrated in Two Wheels Through Terror, makes him a fine guide to those who wish to explore the planet on two wheels.