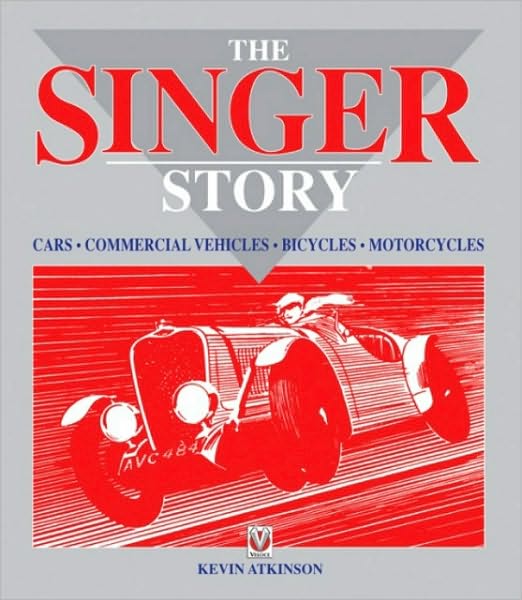 “It could be said that the fortunes of Singer reflected those of the entire British cycle and motor industries, starting at the birth of the cycle era and progressing through motor cycles to cars, with mergers, takeovers and financial disasters along the way.”

Everyone knows that Bugattis used distinctive flat-spoke aluminum wheels. So did Singer—but 20 years earlier. The curved front forks of a bicycle are a George Singer patent, and still in use today. In fact, Singer was once the world’s largest cycle manufacturer. The press called the Singer Ten “the Rolls-Royce of cyclecars.” If you don’t know Singer, you should.

The one thing among a vast lineup of mechanical devices that Singer and Co. did not build was the eponymous sewing machine. Confusion about this is nothing new: once upon a time the two companies had an arrangement by which each forwarded to the other orders that had mistakenly been placed with the “wrong” company.

There’s nothing at all glamorous about Singers, but, still, it’s a pity that a marque that once ranked among the top three British motor manufacturers and pioneered the small economy car is today only remembered as a blip on the radar.

Reprinted in this publisher’s Classic Reprint Series ten years after its first publication, this book was then and has remained the only thorough, overall survey of the company. It thus offers essential context for the several model or segment histories, some of which most excellent, that focus on smaller slices of the pie. While Atkinson is certainly a singularly motivated Singer researcher, the main reason for his being able to cover more ground is that previously inaccessible material became available at various archives in Coventry, the center of the British motor industry and Singer’s hometown.

Atkinson is not only someone who has had Singers play a part in most of his life, he’s also the historian of the Singer Owners Club in the UK as well as the president of the club in New Zealand which he now calls home. This “total immersion” regime is a major advantage when it comes to having connections in the marque community. He also lived near Coventry which made it easy to ferret out former Singer employees and so it is that Atkinson’s book has benefited from a multitude of input and also gotten a clean bill of health from those who should know what’s what. The book also received the support of the respected Michael Sedgwick Trust that encourages new research into and recording of automotive history.

The book title pretty much makes clear what the book covers; the only further clarification one might add is that it also touches upon competition machines but does not fully exhaust the topic of Singer’s wartime role as a supplier of munitions. The latter is of course only peripherally relevant to vehicle production but factors into the overall picture of industrial activity. The aforementioned Singer Ten was not only successful for its maker but inspired a young, and enterprising, apprentice to buy 50 of them and sell them at a profit. That was Billy Rootes, and he knew a good thing when he saw it: those Singer profits launched an empire that would, in time, see the Rootes Group own Singer! And Sunbeam, Talbot, Hillman, and others. Rootes eventually would be taken over by the American Chrysler organization; so even if the vehicles themselves leave you cold, the business story alone makes the book worth reading.

Comprehensively illustrated (all b/w) with only period photos, drawings, ads and brochures, all thoroughly captioned, the book absolutely fills a gap. Production stats and technical specs are worked into the text, appended is a summary of marque clubs and thoughts on memorabilia collectability. Index is quite satisfactory.

Lamborghini: Where Why Who When What »
« Full Circle: A Hands-On Affair with the First Ferrari 250 GTO