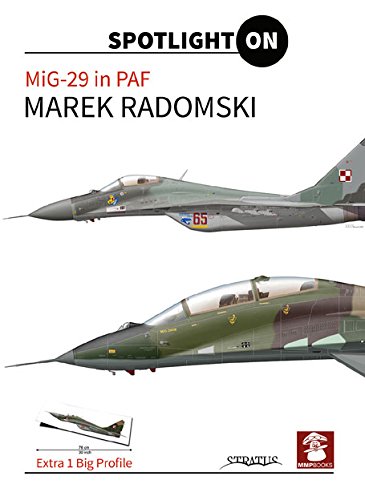 How’s this for a Black Friday doorbuster: a used but fully operational MiG-29 for €1 each. “We’ll take 22,” says Poland. Never mind that it takes €25,000 an hour to operate one, which is why Germany was selling its fleet in the first place (except for one that was stuffed into a museum) and switched to the much more efficient Eurofighter.

PAF here is the Polish Air Force, the topic of this book, but PAF is also the reporting name of the Pakistan Air Force (which has no MiG-29s whereas its neighbor India was the first international customer for the aircraft, giving them some of the most colorful treatments).

The name of this series of books, “Spotlight ON,” tells you the book is strictly aimed at scale modelers, and even more specifically at colorists because there are no technical drawings that would allow you to build one or customize a kit but only color profiles and the occasional top/bottom view that allow you to paint your model. There are also no photos and an only 2-pages-long introduction enumerating the most basic facts as they relate to the PAF. That, in turn means, that variants not flown by the PAF 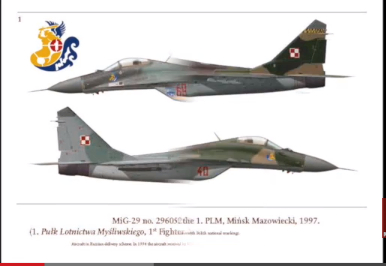 are not covered here, such as the multi-role 29M, the navalized 29K, or the most current model, the 35, or variants modified for aerial refuelling. In other words, you’ll have to be fairly sure of your requirements to get anything out of this book.

Preceding the color section a neat table spells out the various schemes and their respective patterns/camo by paint code. This is actually more complicated, and also more interesting, than one might think! The uninitiated may look at the 44 color profiles (most of the port side) and think they all show the same two basic shapes, a single-seater and a trainer. Eagle-eyed modelers, on the other hand, will note tiny differences, and they will be glad 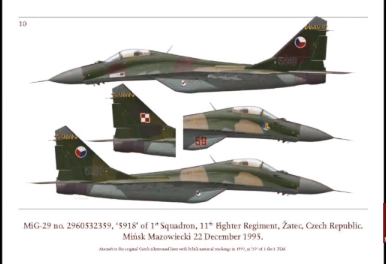 for them—but they will also worry. Worry if the illustrator is really, really, really sure. One example (p. 36/37): one and the same flight article is shown in East German markings, then West German, then on the day it was released by the Germans to the PAF—but this last version has all of a sudden sprouted top/bottom anti-collision strobe lights and differently-shaped protrusions behind the nose cone. The intro did spell out that the German aircraft were “fitted with devices required for flying in NATO airspace”—but are those it? Ah, the agony . . . 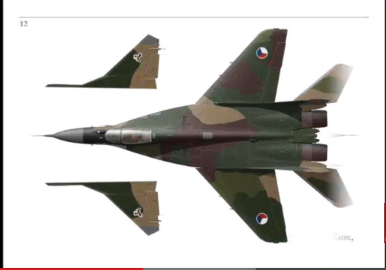 Modelers who cannot recreate the special markings with paint will have to wait for decals to come out. The book actually comes with a flyer showing an aircraft that is also in the book, but here too there is a bit of ambiguity inasmuch as the book calls no. 4105 a 29GT, which would mean an ex-German Trainer but the flyer calls it a UB.

Long story short: this book—books like this—keep you on your toes. They absolutely have their place but you have to know if this what you need and expect. Lest we forget, there’s a 4-panel fold-out profile that’s 30 inches long and looks good on the wall even if scale modeling isn’t your thing. One other item worth pointing out is the treatment in 5 views of the wild one-time color scheme applied to one of the German MiGs upon departing their US training base (thank goodness decals are available!): 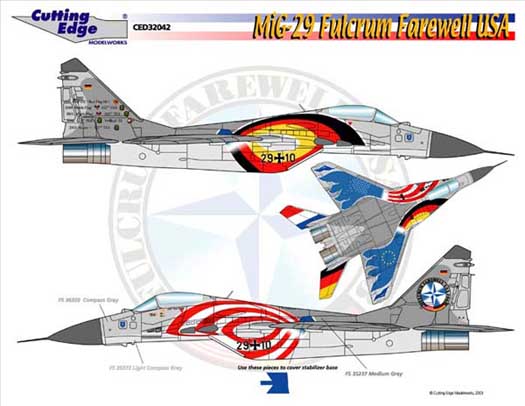 Those one-Euro MiGs were a one-time deal but if you need one in your driveway there’s a Fulcrum for sale right now in the US: a restored, airworthy 1986 UB trainer for sale at a cool $4.65m!