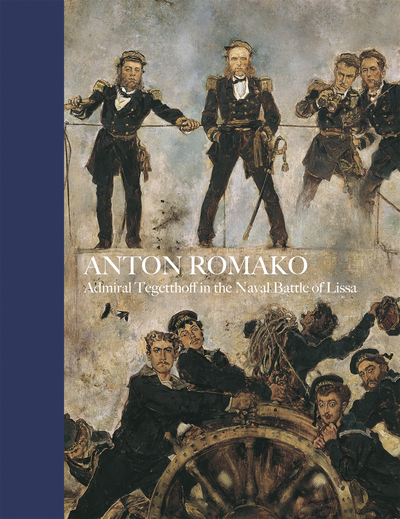 “This bold spatial reduction is accompanied by compressing time into a split second. In a depiction in which battle and victory, action and outcome become one, the episodic character, which had previously dominated, gives way to an emblematic, abbreviated pictorial language and dispenses with the entire decorative apparatus of traditional history painting.”

There you have it. This one little paragraph spells out why this painting matters: it dispensed with the entire decorative apparatus of traditional history painting. Mind you, people hated this “psychodrama” that plunges the viewer right into a scene bursting with narrative detail and Romako didn’t pursue this path again in the few years that remained to him, but it was bold and wild and visionary. Today, the style and this painting are celebrated, so much so that a version of this very scene is engraved on the 2004 commemorative €20 coin!

No interest in art? Fine. Your loss, but fine. This book goes far beyond color on paper, or in this case oil on wood, and that’s because the art it talks about goes beyond the obvious. You may have never heard of Austrian painter Romako (1832–1889) or Rear Admiral Tegetthoff or Lissa but this little book, which is based on a 2010 museum show, will surely pique the interest of anyone who is curious about the world and the things in it. 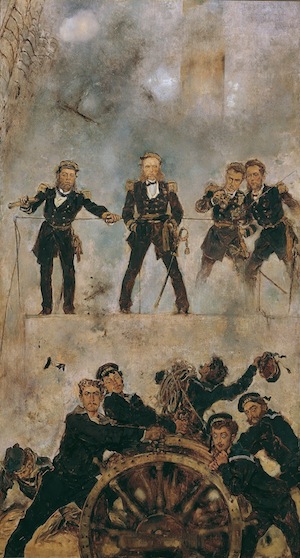 Consider the time of this painting, 1878–80, and then take another look at the cover. Even without further guidance you’ll probably observe that this is an unusual style for the time and the place. It is, simply put, modern for its day, with all that this implies in terms of critical and commercial success, readability and, well, “meaning.” The original painting (left) is more oblong, 86.5 x 47.5 cm, and obviously wouldn’t fit on the cover so it is cropped, mostly on top where it lost some of the smoke and ship structures and some on the bottom. This version of the painting is believed to be the first of two, the second one dating to 1880–82 and almost half the size (below). Same people, same scene—the quarterdeck of Tegetthoff’s flagship SMS Erzherzog Ferdinand Max which is about to ram the enemy—but one important similarity: the admiral in the same position and with the same stance, hands in pocket, feet turned slightly inward, cap askew. Everyone around him is holding on to something; he is not. The very picture of tense calm in the face of chaos. 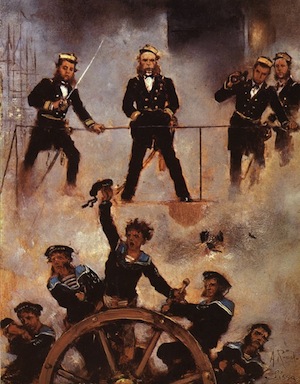 Why Romako (“I refuse to be kicked underfoot!”) painted it this way and what people had to say about it is what this book explores. It is a collection of seven essay edited by the Director of the Belvedere in Vienna, Agnes Husslein-Arco. The former summer residence of Prince Eugene of Savoy, the Belvedere is home to fifty examples of Romako’s work. All of these are shown in chronological order at the back of the book, with the earliest going back to ca. 1849. If you are new to Romako, this is the place to get your feet wet. He was known for his portraiture but thought of himself as a history painter and you’ll see right away that the Tegetthoff paintings are so different from the other works here that one is hard-pressed to see them as from the same hand. We do know from his sketchbooks that there were other paintings in this style, but the nearest, the Battle of the Amazons, has gone missing long ago.

The book is so diverse that a review of all it contains would be as long as the book itself. Suffice to say, then, it is a most excellent book, thorough, deep, splendidly illustrated, beautifully put together. For anyone with interest in marine painting, or even naval matters in general (there’s even a Glossary for those who are not, yet) or the history of Austria for that matter, it is something that will enrich your library and brighten you day.

Fritz Fleischer und seine Busse »
« The Roycean: From Manchester to Crewe, via Derby, No. 5