Merchants of Speed: The Men Who Built America’s Performance Industry 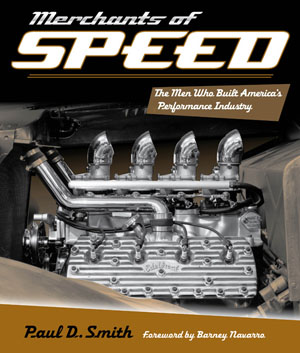 One of the many cultural developments that accompanied the end of the Second World War was the rising interest (some might say craze) for automotive performance that continues to this day. After the war, as Americans came home and started the business of building the postwar nation, a few automotive visionaries began developing performance parts for the standard family wagons that the Big Three were making in Detroit.

Names like Edelbrock, Offenhauser, and Iskendarian became synonymous with performance, and countless speed shops and shade tree mechanics across the country used their parts and shared their expertise. In this period, scratching an extra horsepower out of a stock engine required knowledge, skill, and patience—you couldn’t just plug in a computer and give yourself 50 more ponies!

Paul Smith’s new book profiles the most significant men who performed this pioneering development work. Today’s entire world of automotive performance rests on the shoulders of the 26 men and their companies documented in this display-quality hardbound volume. At 240 pages, the book contains information and hundreds of photos of the glory days of hot rodding that simply will not be found anywhere else. Smith’s access to the few leaders of the original hot rod movement who are still alive delivers unique information with exceptional credibility.

Smith comes to the topic from the perspective of a hot rod and drag racing enthusiast, and spent much of his research time for this book living in Los Angeles, which was a center for hot rod development at the time. Because the book is written based on accounts provided by the still-surviving members of the original fraternity of hot rodding, a certain amount of nostalgia shows through, but that’s forgivable in a book that is well-written and includes the basic facts of who, where, when, how, and why.

Racing and land speed competition were a big part of the hot rod movement, and for an aftermarket parts manufacturer to gain credibility, claims had to be proven out on the drag strip, the oval track, and the dry lake beds. Extensive photography in the book documents the look and equipment of the actual racing machines as they competed. Restoring these vehicles (when they can be found) is a big business today, and most books that cover these vehicles opt for new photographs of the restored vehicles, where this book relies on original photos from the competition period.

At a cover price of $40 in the United States, this book is a great value for the hot rod enthusiast or builder who wants to complete his knowledge of the companies and names found on period parts. Merchants of Speed is not a builder’s guide or restoration manual, but for those who plan to restore or recreate authentic hot rods of the 1940s and 1950s, the wealth of original photos and product development timelines will provide provenance for both design and equipment choices.

In short, if you’re an original hot rod restorer, replica maker, or simply an enthusiast, you will want to own a copy of this book.

Copyright 2010, Jeffrey Zurschmeide (speedreaders.info)
Jeff is a lifelong devotee of sports cars and a second-generation SCCA member. He has written for numerous magazines and newspapers on cars and the automotive enthusiast hobby and has authored three books on automotive customization, repair, and performance modification.