The Cellini of Chrome 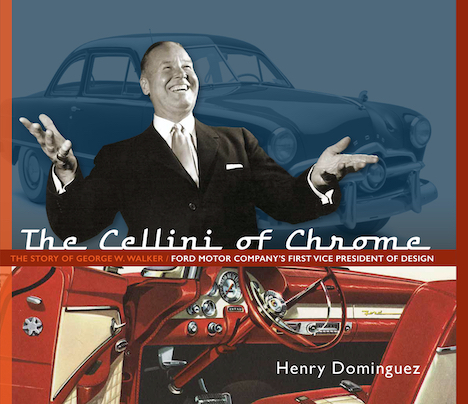 George Walker was flamboyant, charismatic, possessed flair and a personality that matched his beaming smile. Ford hired this capable designer as its first-ever vice president of styling.

With three men generally recognized and acknowledged as most directly responsible for bringing styling and design to the corporate functions of major Detroit major automakers, it’s a mystery why only two of them have been extensively written about—until now!

Henry Dominguez, author of several other Ford-oriented histories*, set about filling that void with this book and Racemaker Press stepped up to publishing it. However, the book’s title isn’t quite a true reflection on Walker as Dominguez’s text makes very clear. Once Walker was elevated from consultant status and hired to be Ford Motor Company’s first-ever vice-president, he named the department he headed Ford Styling.

That said, Walker had earned his degree as an industrial designer and subsequently established his firm, George W. Walker—Industrial Design, creating designs for a wide variety of clients and an equally wide and varied type of products as had another member of that design triumvirate, Raymond Loewy. Both Loewy and Walker had been afforded extensive articles in Time magazine as each had been featured on the magazine’s cover; Loewy in an October 1949 issue and Walker in November 1957. Ironically, the third of that triumvirate, Harley Earl, was never on Time’s cover.

While the inclusion of a Bibliography would have been interesting and potentially useful to a reader—especially to anyone wanting to do additional research—it is possible by closely reading Dominguez’s Introduction and the last few pages of his concluding chapter to discern with fair comprehensiveness many of the sources he consulted and the names of those he interviewed, for, as he tells us right at the outset in his Preface, he never met or spoke directly with his subject George W. Walker. But he did get to know and develop relationships with Walker’s family—especially grandkids all of whom recall their grandparents well and with great fondness and love.

Their love didn’t blindly defend or accept all of their family lore. Some even helped debunk one of George’s long-held assertions. He’d always claimed that he had Native American blood in his veins—specifically Kiowa. Several grandkids had their DNA tested and evaluated: Nope, not one single trace or drop of any Native American heritage; family roots were English and Norweigan. And they also acknowledged that they knew of George’s reputation as a ladies man but said that he always treated, Freda, his wife of seventy-one years and their grandma, with the utmost care and respect—even helping or actually selecting and buying her clothes and designing her hairstyles for she enjoyed it often being quoted as saying “He has so much better taste and style…than I do.” Then they added that he always, “always put her first.” So they looked upon his activities that earned him that reputation as simply part of the existing mores of that different time and place.

The book isn’t all about Walker’s personal life for there’s plenty of Ford history from competitively creating the design that resulted in the ’49 Ford, to how the wonderful ’55–57 Fords and Mercurys came about, as well as the Continental Mark II and more.

Relative to the Continental, serious historians are likely aware that those Mark II Continentals were not Lincolns but rather a stand-alone. As Tom Bonsall explained it in his 1981-published The Lincoln Motorcar, Sixty Years of Excellence, “In a purely technical sense, the Continental was not a Lincoln. It was manufactured by the Continental Division and grouped together with the Lincoln Division under the management of William Clay Ford.” Ford Motor Company had wanted to keep Lincoln and Continental as separate divisions, but Bonsall went on, “…the public… refused to believe it.”

Dominquez has written a wonderful, interesting, and enjoyable book. And Racemaker, which has rightly earned a reputation for producing books with good-looking pages, printed on quality paper and well bound, has created a beautiful presentation with the dust jacket image totally different from the actual book’s front and back covers as the foregoing image shows.

Sadly there are also some shortcomings that are not of the author’s making. Prior Racemaker-produced books have shown this publisher puts less than careful attention to professional proofing. Unusual too is that this book’s Table of Contents is incomplete because missing totally are the Preface and Introduction. And truly frustrating for a book that should be an historian’s delight and useful to researchers, there is no Index whatsoever. Examples of the uneven proofing include the spelling of Elwood Engel’s surname which is sometimes, in text and/or photo captions, Engle just as sometimes it’s Loewy (correctly), other places it’s Lowey.

That said, do not let the above paragraph keep you from adding this book to your library for it’s that good. But also, hopefully, should the book go into a second printing it won’t be until attention is paid to correcting the oversights.

The Cellini of Chrome

Balloonomania Belles: Daredevil Divas Who First Took to the Sky »
« Chris Pook & The History of The Long Beach GP