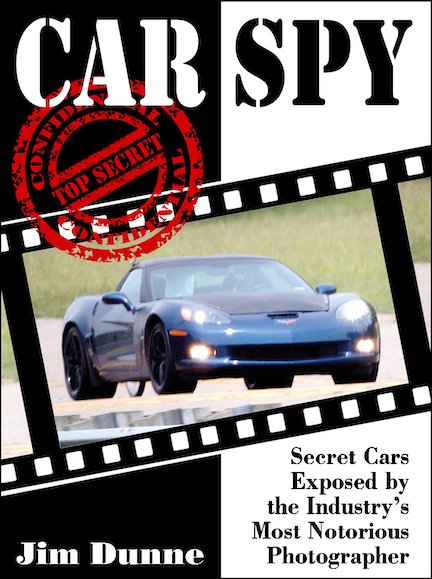 Jim Dunne, the author of this book, is considered the originator of automotive spy photography. Leo James Dunne was born in Detroit, MI in 1931. After service in the U.S. Army as a reconnaissance specialist, he attended the University of Detroit earning a degree in industrial engineering. Then, working as a journalist, he became the Detroit editor for Popular Mechanics. Dunne became interested in photography, which led to a lifetime career of taking then selling his undercover photos to media outlets. He died at his Michigan home in 2019, at age 87.

Every auto manufacturer in the world is more than highly secretive about allowing any viewing, or especially any photos taken of their concept vehicles before they themselves deem the model ready for public viewing. They will go to extreme lengths to keep eyes or cameras as far away as possible, considering the practice akin to industrial espionage. Getting a glimpse or especially a photo of a new design or idea of a competitor’s model, can be worth millions to a company. However, most car magazines are purchased for the purloined shots of a new model, or design innovation. It is exciting to see the future! Many car buffs love to look at some of these older magazines to compare the pictures of “new ideas” being tried to what was actually put in production.

Auto manufacturers have secret, or not so secret, proving grounds they use to test their vehicles under various road and weather conditions. General Motors uses Milford Proving Grounds, in Milford, MI. One elevated area overlooking the grounds was named “Dunne’s Hill” by GM car testers for all the photos taken from this spot. The area has been developed and is now the middle of a housing development. However, as Dunne puts it in the book, it is still being used by other photographers for spy shots.

Once the prototype car is put on real roads, the company usually covers the car in some type of camouflage. There are directives now to completely cover the car quickly after stopping for a length of time. In the 1960s and ‘70s when Dunne first started out, companies weren’t concerned with covering their styling revisions. Most uncovered concept cars or prototypes were to be found on neighborhood streets and freeways around Detroit, or Dearborn, or Highland Park, for GM, Ford, or Chrysler cars. That made it easy for anyone to take photos of them, if they were observant. Then in the late ‘70s, tighter controls were put into place and it became a lot more difficult to spot a prototype.

Dunne tells it all; the funny stories, stories of mistakes, stories of behind the scenes ways a photo, in say, Car and Driver, ended up on the front page! There are over 200 color and black and white photos to intrigue and delight you, along with the stories of how they were obtained. This book is recommended for anyone who is interested in car design, vintage cars, car magazines, road testing, spying, or just for a great read.

Posted Under: Automobiles | Author: Jeanie Jacobus | No comments yet