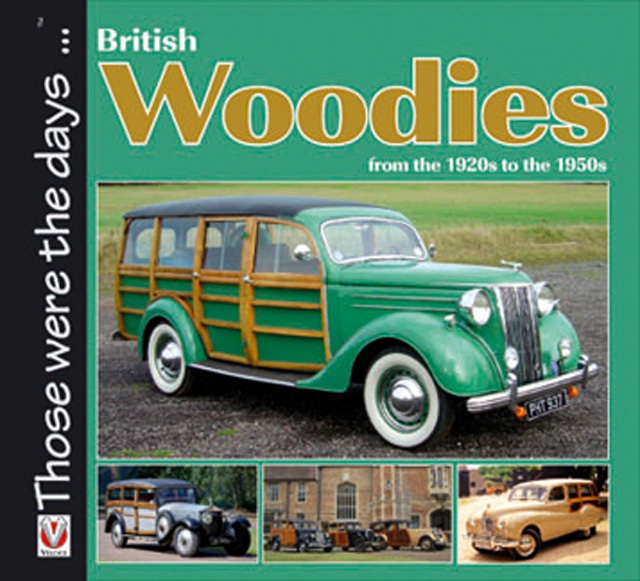 To an American reader, woodies may seem a quintessential American answer to a practical problem: a shortage of steel. But the Brits, too, suffered the same problem and, necessity being the mother of invention, came up with the same answers. In addition they had a further incentive in the form of tax breaks for cars with utility bodies. This obviously applied to the purpose-built commercial-use woodies, but also explains why the British “shooting brakes” or “estate wagons”—unlike, say, the American Chrysler Town & Country or Ford/Mercury Sportsman—really were not primarily intended as passenger cars with creature comforts. While the latter do exist, they are not within the scope of this book.

Written by Colin Peck, the founder and chairman of the Woodie Car Club, this slender softcover book is obviously only an introduction. The author’s introductory remarks explaining the woodie’s genesis and demise are followed by a summary of their uses in World War Two. The chapters that follow are devoted to the chassis makers and “main” body builders, in alphabetical order. Their names range from the utterly obscure (Gaze of Kensington, anyone?) to the primly established such as Hooper and Rolls-Royce. The depth of the descriptions varies, from as little as one or two sentences per builder to several paragraphs.A closing chapter addresses restoration issues. (Ruinous! Matters are not helped by the fact that many were one-offs to begin with.) The book is nicely illustrated with just shy of 100 period and modern photos, ads, and a few detail shots of the workshops. Most of the modern photos are in color and show restored cars in good detail and with useful captions. The literature on this subject is exceedingly sparse and this book, small as it is, fills a gap. The index is brief but serviceable. All the books in Veloce Publishing Ltd’s “Those were the days . . .” series are uniformly commendable for packing an enormous amount of information into their relatively few pages.

Rewritten and adapted from a review first published in the March/April 2009 issue of The Flying Lady, the periodical of the Rolls-Royce Owners’ Club (RROC/USA).

The British at Le Mans, 85 Years of Endeavour »
« The Miller Dynasty