Hot Rodding International #13, The Best in Hot Rodding from Around the World 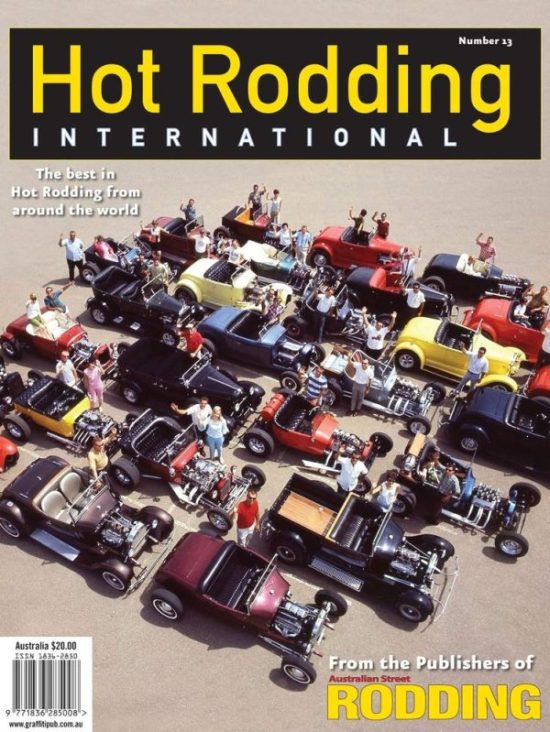 “Being a small, family-owned publishing company located in regional Victoria meant the negative effect on us turned out to be quite minimal, in fact, the Covid-19 pandemic even had several positive outcomes for us that we didn’t anticipate. It seems that a great many hot rod and custom enthusiasts retreated into their workshops and reading rooms and went to work on their projects with renewed vigor—there wasn’t much else we could do . . . I am convinced that hot rodders fared better than most, not least because I believe the ability to throw yourself deep into a project has hidden mental health benefits at such a time.”

Hot rodding . . . that quintessential American pastime—here in the crosshairs of an Australian magazine! This is not nearly the novelty it first seems because the annual we are presenting here is now in its 13th edition already, which is as nothing when compared to a sister publication by the same publisher, Australian Street Rodding, which has been making the rounds since 1977. 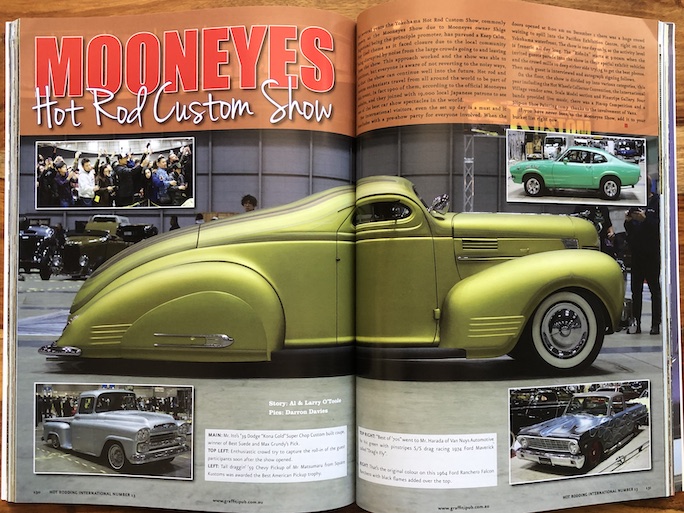 Delectable cars, anywhere and anytime. Can you deduce from the types of cars shown where “Mooneyes” takes place? In Japan! And what about the name? Dean Moon, as in Moon Speed Equipment of Southern California. Shige Suganuma was a friend of Moon’s and his rep in Japan.

True to its name, Hot Rodding International is undeniably international, this particular edition covering Japan, the UK and the US in addition to New Zealand and its home turf, Australia. As an aside, all editions are still available albeit some, such as the inaugural issue, only in digital format. 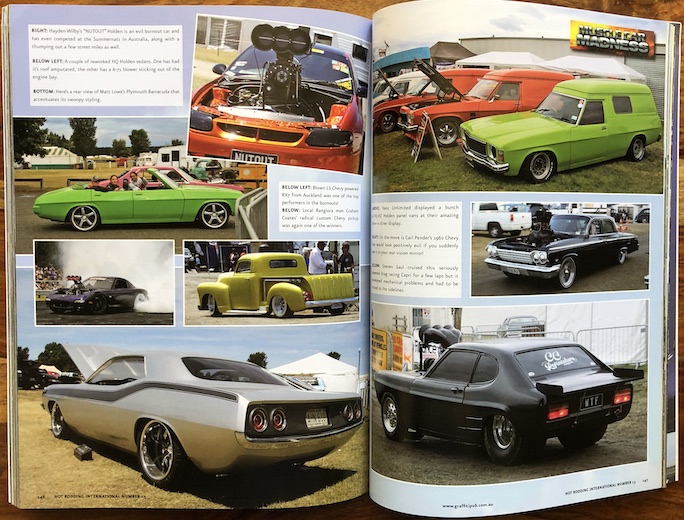 Top right: those are Holdens. And panel vans at that, something you’d be hard-pressed to see anywhere outside of OZ/NZ. And that racing Capri . . . this is where a magazine with an international profile really moves the needle.

Of note, Graffiti Publications is a family-run outfit whose proprietors Larry and Mary O’Toole were recognized in 2020 with a special “Legends” award by the Australian Street Rod Federation for their commitment to the cause of hot rodding. That the firm is located in what locals refer to as The Street Rod Centre of Australia (Castlemaine, Victoria) is probably of no relevance to foreign readers but goes a long way towards underpinning the O’Toole’s decades-long role as pillars of the rodding community. Dating back to the gold rush days of the 1850s, this central Victorian town became a locus for specialist engineering and later automotive activities, and especially the Maldon Hillclimb established in the late 1920s attracted builders of “specials,” i.e. hot rods of a kind. 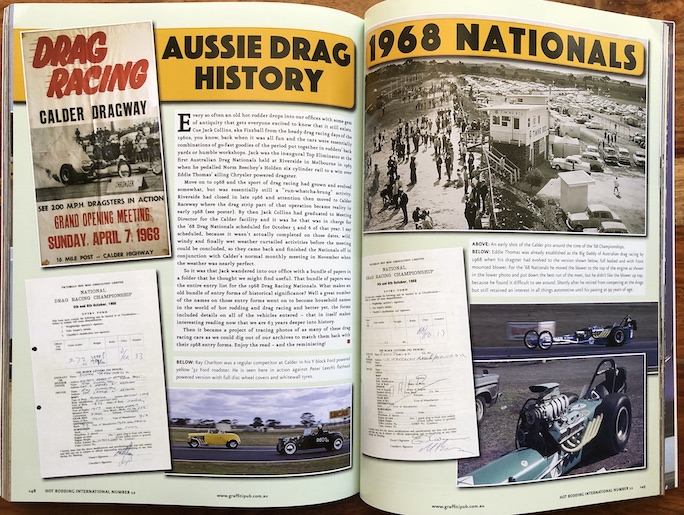 At any rate, Graffiti Publications will be fifty years old in a few years so it’s about time to direct our attention that-a way. Magazines have a different MO than books; a little bit of everything rather than a deep dive into any one thing. An annual magazine such as Hot Rodding International will be prioritizing event coverage. This one reflects not only on the big events of 2020/21 but also on those closer to home like the Castlemaine Coffee Cruises. To move beyond the here and now there are also reflections on historic happenings such as the 1968 Australia Drag Day Nationals and multi-decade overviews of the NSRA Nationals in the USA and Dry Lakes racing in Australia. Graffiti Publications has its own, deep archive of previously unused photos so there’s a good chance you’ll see something new. 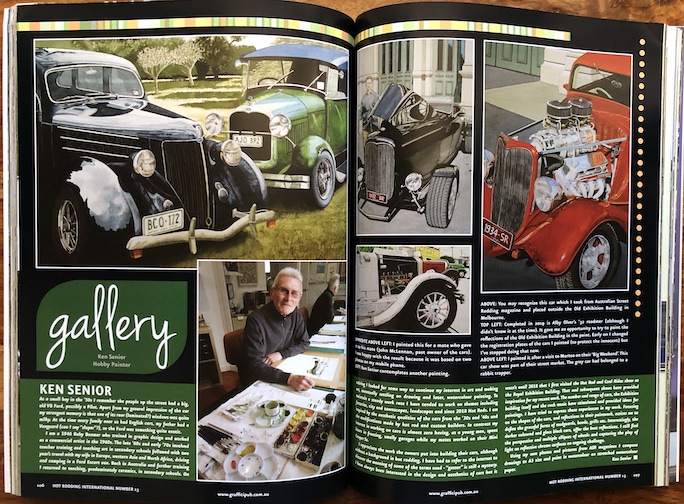 This is a profile of—and by—Australian artist Ken Senior who is, in fact, a “senior” but has been drawing rods only since 2018.

Again unlike a book, there is no obvious need or even benefit in progressing in a particular, set order so simply follow the Table of Contents. There are profiles or fine artists, racers, and hot rod owners. The level of magnification and prose varies considerably, typical for any enthusiast magazine featuring work by “civilians.” Probably the biggest name is that of US writer Pat Ganahl who, having retired from book writing, these days publishes a blog every two weeks; one installment is reproduced here.

So, 200-odd pages of entertainment—and, see above, “mental health benefits”—all for a mere $25 outlay. Cheap thrills. The one thing everyone who uses magazines for research and not merely short-terms giggles will moan about: there is no Master Index for all issues.

The Best in Hot Rodding from Around the World

The Douglas B-18 and B-23: America’s Forsaken Warriors »
« Al Unser Jr.—A Checkered Past