From Balloon to Boxkite: The Royal Engineers and Early British Aeronautics 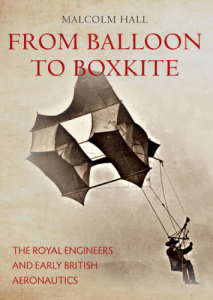 It’s not for nothing that the British Royal Engineers’ motto is “Ubique” (Everywhere). In their 900-year history they have been involved in every major conflict the British Army has fought in the far-flung British Empire, here and there and—everywhere. And by floating (pun intended) the idea of ballooning they added an entire new dimension to their bag of tricks: Up.

Over time their interest in aerial mobility, first investigated in the 1860s, would see the formation of the Royal Flying Corps (1912), which, along, with the Royal Naval Air Service, was consolidated into the Royal Air Force (1918).

“Apart from moving in the same medium, the gentle balloon, sailing slowly and peacefully through the skies, has nothing in common with the modern warplane, ripping its path through the air by the brute thrust of its snarling engines.”

This book follows the early aeronauts and the development of the balloon from tethered, stationary observation platform for directing artillery to communications instrument (unwieldy semaphores then wireless telegraphy) to bombing trials (throwing sandbags by hand at a cloth target laid out on the ground). Inevitably, the balloons’ limitations led to an adaptation of the existing “technology” in the form of airships that were augmented by kites and then altogether superseded by fixed-wing aircraft. Speaking of technology, the book of course refers to basic operating principles and the occasional technical highlight but stays away from fundamental science.

Hall, who has a number of books on early aircraft and military subjects to his credit, has written this book in uncommonly well fleshed-out prose. One might well call it “ornate”—the sentences have flourish, depth, complex syntax. Unless you think in soundbites, they are a joy to savor—a ood read in the most literal sense. As the foregoing, and the subtitle, indicates, the book’s focus is on the role of the Royal Engineers. While it does make mention of other, concurrent European developments—especially dirigibles—there is no pre-history regarding the origins which probably go back to the “wooden bird” of China’s Lu Ban in the 5th century BCE. The Chinese definitely had the first manned glider, launched from a tower and piloted by Yuan Huangtou.

American readers’ ears will perk up at the mention of Samuel Franklin Cody from Iowa, who always played up an “implied” but entirely fictitious association with Buffalo Bill Cody. Horseman, showman, gold-digger he established himself in Old Blighty and dabbled in kites, airships, and planes and is quite a factor in the development in these machines.

Given the book’s format, the photos are on the small side. Needless to say, one would always wish for more but they are satisfactory enough in terms of variety and reproduction. Appended are a timeline showing the development from 1878 Balloon Equipment Store into 1912 Royal Aircraft Factory and Royal Flying Corps; the names, capacities, and theater of operations of British Army balloons; and a list of aircraft operated by the Balloon School. The Bibliography is extensive and the Index thorough.

Anyone with an interest in aviation history or even in just the tenacity of human endeavor will find this book delightful.