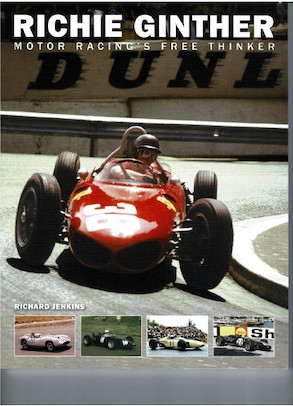 My interest in motor racing was waxing as Paul Richard Ginther’s was waning. I doubt if I was  the only young enthusiast  whose  knowledge of Ginther began with the fact that he’d won a Grand Prix in a Honda and ended with the rumor  that he had latterly become an off grid hermit.

The only other thing I knew was that Ginther had a face that could only have belonged to a special type of American. He epitomized the wiry little tough guy with the “can do” expression, the guy repairing the Grumman Hellcat in the Battle of Midway or the everyman GI storming Omaha Beach on D Day. Until I read this long overdue book, my knowledge of Ginther’s career arc had remained virtually non-existent for half a century. In mitigation, I can plead that my enquiries reveal that, a few magazine articles aside, the only Ginther biography was a 7000-word ebook published in 2016. 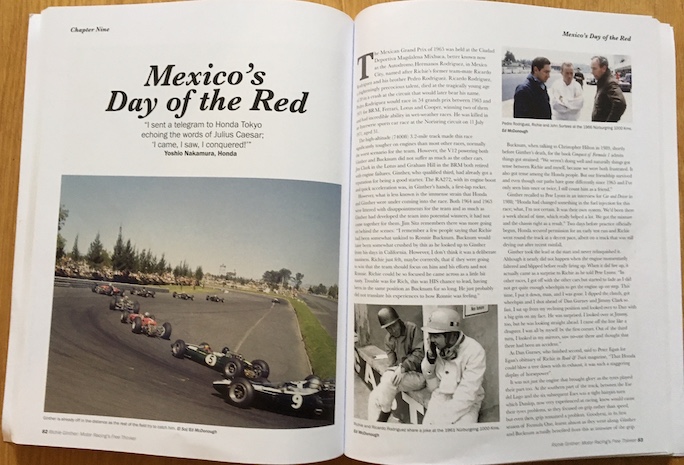 Richard Jenkins has remedied that void in his forensically researched book and, for this reviewer, he has also kindled an interest in both Ginther the man and the era in which he raced. This 130-page softback is printed on high-quality gloss paper and measures 8 x 10 inches. If you’re thinking “Hold on, only 130 not very big pages, that’s a definitive biography?” then don’t worry, because detail is one thing this book doesn’t lack. The modest page count is attributable to the small print used for the text, not a lack of source material. The print size only narrowly escapes the charge of being too small, and a good reading light certainly aided my enjoyment of Jenkins’ work.

Before I discuss the text, let me talk about the illustrations. Just one adjective is all I need, because they are wonderful. There are scores of them, some in black and white but a surprising number, even of Ginther’s early career, are in color. Nearly every one is arresting, and full of the sort of period detail that complements the narrative perfectly. Their sources range from well-known figures in our world—the Grand Prix Library, Ted Walker’s  Ferret Fotographics—to family members such as Cleo Davidson, and also include names unfamiliar  to me such as Jack Fooshee and Günther Asshauer. 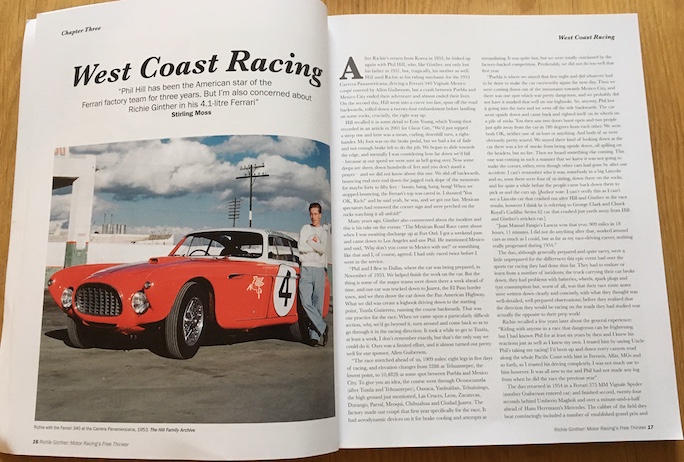 It isn’t easy to pick favorites from this embarrassment of photographic riches but I must highlight three pictures, because each is of extraordinary quality, and each marks a key stage in Ginther’s career. The first is of Richie’s Ferrari 500 Mondial at Sacramento in 1956, the driver a study in concentration, the rear of the car squatting down under acceleration with the front wheel barely touching the ground. The second is a full page, black and white portrait of Ginther’s BRM P261 at the Nürburgring in the 1964 German Grand Prix. The fact that both front wheels are airborne is testament to the car’s velocity and the driver’s commitment, but it is the setting that makes the picture arresting. The car is in the foreground, but it is the background which is unforgettable, and it is eloquent testimony to a lost age of Grand Prix motor racing. Under a forest of tall pines, separated from the track only by a simple post and rail fence, is a sparse group of twenty spectators. Some lean against the top rail, and one group reclines in Dejeuner sur l’herbe homage. No, this scene does not resemble a modern Grand Prix in even the remotest respect. My final choice is of Ginther driving the Eagle-Weslake at Monaco in 1967. He failed to qualify, but the image of the most sublime Formula 1 car of the Sixties, the snake-pit of exhausts glinting in the sunlight, with the sparkling harbor only feet behind, is stunning. I can think of no better place and no better car in which to play out one’s swansong. 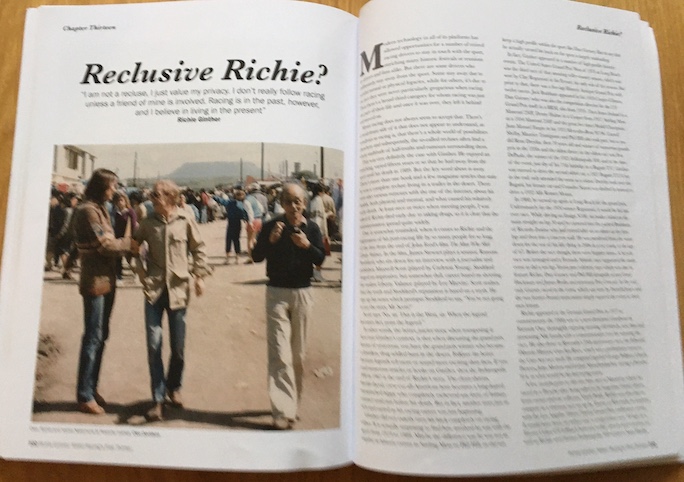 The author takes a straightforward approach to this biography, starting with Ginther’s early days in Hollywood Heritage, continuing with fourteen titled (but un-numbered) chapters and concluding with Richie Ginther’s Legacy. There is also a complete set of race results, which is invaluable, and also much longer than I had expected.

Ginther had  no formal  basic training in engineering but from the account of his early years it is clear that he soaked up knowledge from everywhere he could and derived real joy from machinery—“especially specialised machinery, cameras, guns, fighter planes, race cars, something with a single intent.” This autodidact engineer applied his knowledge throughout his life, most famously when he used his experience at Douglas Aircraft to create his greatest legacy, the tail spoiler. This was in 1961, at Monza, when the new, mid-engined Ferrari Tipo 246 sports racing car was misbehaving at high speed and, in Ginther’s words, the simple solution “was practical experience, not science.”

The author describes a man who didn’t fit the stereotypical race car driver template, those guys who regard a race car as a mere tool in which to achieve personal glory. How many of Ginther’s peers (let alone modern Formula 1 drivers) would ever say “I can’t endorse abusing the car to stay in front”? Most drivers, regardless of era, loathe the rigor of testing but Ginther revelled in it, but only on condition that he also  had a recognized engineering role too. I can easily imagine the joy Ginther took in those long hot days spent testing at Modena, and there is a lovely small picture of him there with Wolfgang von Trips. They lean on a Fiat Millecinquecento saloon, the German pointing out a detail on the shining red Sharknose Ferrari 156, perhaps the very same car in which he was killed at Monza in 1961. 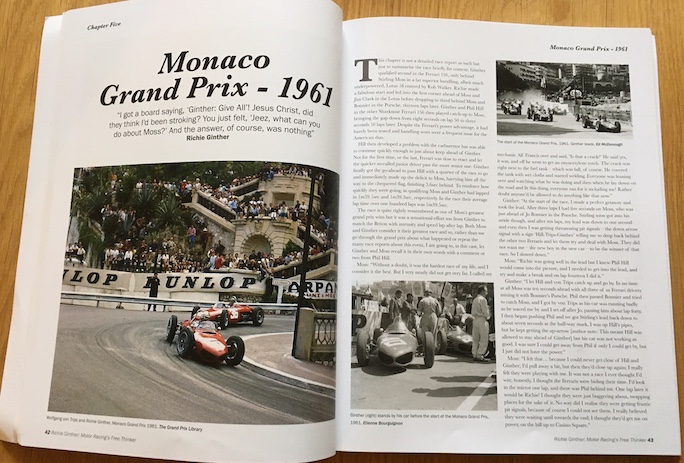 And what of Ginther the racer? Everybody knows that Stirling Moss’ finest race was the Grand Prix of Monaco in 1961 but how many of us know that it was Ginther’s day of days too? He ended up second, with joint fastest lap, and by doing so he cemented his reputation as a serious Grand Prix driver: “That was certainly the best race I ever drove and when Stirling said it was his too, I felt incredibly proud.” But the price Ginther paid was a lifelong rift with his compatriot, friend and sometime co-driver Phil Hill, arising from his anger that Hill, his Ferrari team mate, had blocked him. As Jenkins puts it, “Richie…appears to have had a near 30-year humungous chip on his shoulder.”Four years later, driving the raucous, V12-powered Honda RA 272, Ginther won his only, and Honda’s first Grand Prix. Just looking at the picture of one of the opening laps tells you everything, with the white and red Honda already a speck in the distance ahead of the pack. As Ginther said “Out of the third turn, I looked in my mirrors and thought there had been an accident.”

But within a couple of years, Ginther’s driving career was done, ending with an ignominious DNQ at the Indy 500 on the last day of May 1967. He then moved to team management, notably with Elliott Forbes Robinson before, in the author’s words, Ginther decided “to really experience life to its fullest.” He died in 1989, fourteen years after retiring to explore “A Whole New World” with his wife Cleo.

I think this book’s greatest achievement is to debunk the lazy shorthand which too many writers have employed to dismiss the rest of Ginther’s life. Such as the words used by Motor Sport to summarize Ginther’s career in 2005: “One hit wonder turned hippy.” This is a cynical dismissal of a complex and nuanced career that enjoyed triumph as well as enduring tragedy, and it is to Richard Jenkins’ great credit that he debunks the myth of Ginther’s “decline.” The truth was that, unlike so many retired drivers who drift around race paddocks, as if they need the oxygen of a race circuit simply to survive, Ginther eschewed the Banquo’s Ghost role and found a new life to live. It wasn’t some new age hippy thing at all, but simply the sort of life many retirees opt to lead. The fact is that Ginther’s new life was anything but remarkable. There was travel, an interest in Native American culture, gardening, and keeping touch with old friends like John von Neumann and Honda’s Yoshio Nakamura. He read too, but Tolkien was as close he got to hippy bibles such as Zen and the Art of Motorcycle Maintenance. And how touching it was to learn that he was also a devotee of James Herriot, the veterinary surgeon who practiced a five-minute walk away from where I write these words. Ginther enjoyed his booze too much perhaps, but that was hardly unusual for a man of his generation.

I learned a lot from this book about the tough little guy who raced for Ferrari, Cooper, BRM, Honda and Eagle in Grands Prix, for Ford and Ferrari at Le Mans and so much more. And does it really matter that, without the mechanical sympathy that had made him such a gifted test driver/engineer, there might have been more than one Grand Prix to his name? After reading this book I don’t think it matters a damn—and I have Richard Jenkin’s masterful research to thank for enabling me to take that view.