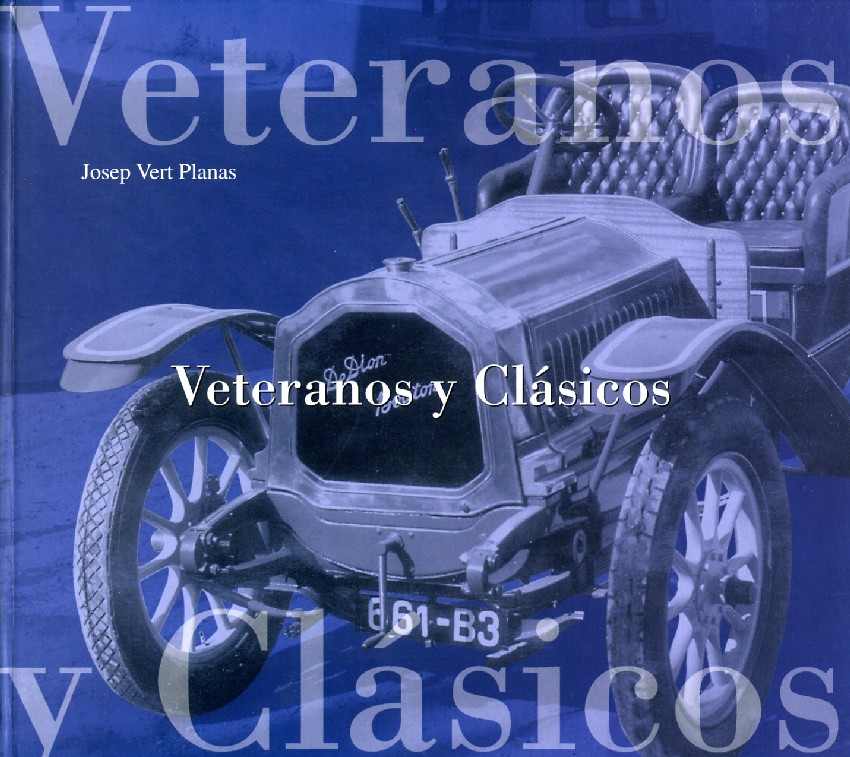 by Josep Vert i Planas

(Spanish) Josep Vert i Planas was born in 1914 in Torroella de Montgri, Girona, into a family of “culturista” who started in the days of the horsedrawn carriages. “Vert Carrocerias” later produced passenger and commercial vehicles but it was after WWII that their interest in classic cars developed into a sideline that specialized in the restoration of what was left after the war had taken its toll.

The book opens on an interesting account of the Spanish automotive world in the prewar and early postwar era. The civil war and WWII were a severe blow to a situation which was already lagging behind countries like Great Britain, France, Germany, or Italy in the 1930s. Therefore, rejuvenating and recycling cars were the answer to a deficient market.

A lot of veterans were restored and rebuilt in the 1950s for a few discerning collectors. Makes such as de Dion Bouton, Packard, Panhard-Levassor, Unic, Loryc, Peugeot, Diaz, Ford, Hispano-Suiza, Talbot etc. are described in the first 60 pages of the book, with many black & white photos.

Josep Vert studied design and coachbuilding techniques before joining the family concern, one of the first and important ones in the country. Early Spanish collectors like Salvador Claret, Ralf Kosidlo, and Manuel Garriga hired Vert to refurbish derelict cars and later to build complete bodies to replace the original ones which couldn’t be saved. His first coup was the recovery of 16 Hispano-Suiza vans from a scrapyard. He built new replica bodies on 14 of them and sold them at a profit.

Then came the Rolls-Royce and Bentley era. What distinguished Vert’s bodies from others were the steel frames he used instead of wood. His firm only made steel-framed bodies; he had all the equipment and they were quicker and therefore cheaper to build. Vert’s reputation soon spread over the Pyrénées mountains and owners from France, England, Switzerland, and Italy started to bring him chassis to be tailored. But the picture was not as glamorous as it looked: English and French journalists wrote that these bodies were an insult to the marques because they were not in keeping with the prewar coachmaking’ practise. Consequently, Vert asked his customers to agree to these all-steel construction methods when signing the order.

The whole venture was made possible thanks to a Californian named John Smart. He had a residence in Lloret de Mar and spoke Spanish. He took part in many local rallies and knew all those that where into cars in Spain. He would locate derelict cars, vans, and ambulances in the UK and buy them. With the help of Joseph Cardona who stored the cars on the other side of the border in Perpignan (France), Rolls-Royces and Bentleys were imported into Spain with a temporary permit—therefore the bodies had to be completed in a specific timeframe, otherwise any profit would be negated by heavy taxes and fines. Some cars were simply recommissioned but 22 Rolls-Royce and 3 Bentley cars were fully rebodied.

Vert also made a replica of a Bugatti Type 37 in the 1960s and in 1967 he exhibited an Aston-Martin replica at the Paris Salon de l’Automobile.

The highlight of Vert’s career should have been the launch of his own marque. “Gerion,” a name derived from the name of a district of Girona. With Michel Urman, manager of Garage Mirabeau in Paris, he made production plans for a Bugatti type 37 replica using modern FIAT engine and chassis parts and a home-made body. Two prototypes were made, one with an Austin-Healey chassis and the other with a FIAT 125 chassis and engine but the Spanish authorities refused to recognize Vert as a car manufacturer and the whole project had to be dropped although a few orders had already been placed by certain European dealers. Josep Vert returned to his passenger and commercial vehicles and eventually closed his restoration business. As a sideline he had a passion for local archaeology, writing many books on the subject and contributimg to the Museum of Torremolinos. He died on Decemeber 16, 2002.

All the pictures in the book were taken in the 1930s and up to the 1960s. They are in black & white and their quality is above average. Some are quite artsy. My only regret is that there’s no index and the cars are not identified by chassis number. Only 1000 copies have been printed.

This book is the only one on this subject and it is an important stone in the Spanish automotive history. It can be recommended if only for its social background. The text is in Spanish but it is not absolutely necessary to master the language to understand what it is all about.

Posted Under: Automobiles | Author: Andre Blaize | No comments yet