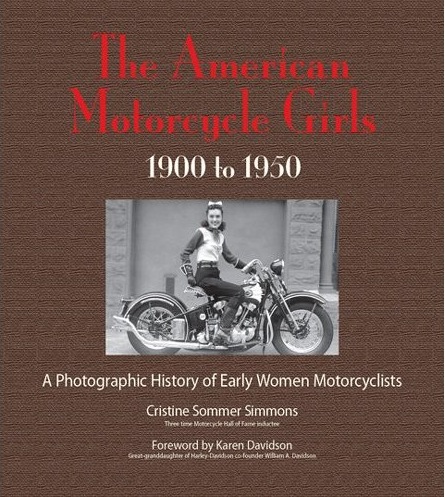 Few things can be more satisfying to the serious reader than to come across a book that boldly goes where none has gone before.

Well and insightfully written, fantastically illustrated, designed with period touches, and very, very nicely printed and bound (the few !@#$% typos be damned)—and not to forget, a really decent price—this book has serious appeal on all fronts. Even if you don’t give a hoot about motorcycles.

But if, regardless of gender, you do like motorcycles, this book easily moves into the “essentials” category. The 3000 people who snapped up the first print run certainly thought so and it is their enthusiastic reception that propelled this book into a second printing within just a few months. Authors dream of this sort of thing . . .

An intelligent book about this subject had been begging to be written, and what good fortune that someone as capable and motivated as Sommer Simmons went to bat. After three years of scouring museums and personal collections, this book is the culmination of many more years of collecting scraps and snippets of the famous, infamous, and entirely unknown women whose pioneering efforts in the world of motorcycles were as essential to the acceptance and proliferation of that form of transportation as they were to social and cultural change.

If this book were about the second half of the century and not the first, the author herself would be included among the torchbearers. She co-founded in 1985 Harley Women magazine (the forerunner to Woman Rider), considered the first widely distributed magazine for women riders in the world, in desperation over the mainstream biker mags of the day whose sole interest in recognizing women in the world of motorcycling was to drape scantily clad female models in implausible poses on chrome-laden bikes. She has since written for several magazines in several countries and for her efforts in promoting women and motorcycling been inducted into three motorcycle halls of fame in the US. Writing is one thing, doing another. Sommer Simmons was the only American woman (of only two women, the other from Germany, in a field of 45) riding in the Motorcycle Cannonball Endurance Run in September 2010, taking a 1915 Harley-Davidson across the country to a finish in 20th place. Long story short, she has a stake in this subject.

Lest boundless enthusiasm get the better of proper historicism, let us agree that, in strictly historical terms, people—no matter their gender—rode motorbikes not to indulge some romantic “wind in the hair” notion but because they had no choice: there was no other form of affordable, commonplace motorized transport. What few cars existed were expensive, of questionable reliability, and of considerable complexity. To better appreciate how restrictive the turn of the last century was, consider that women could be ticketed for the “unladylike” behavior of wearing pants!

Dialing the clock back to 1894, the book begins with a look at bicycling—a movement, a craze even, that was the catalyst for a form of more democratic personalized mobility than the horse and all its associated infrastructure requirements ever offered. Anecdotes of female motorcyclists as early as 1902 are offered, accompanied by period magazine covers of which, curiously, the earliest dates to only 1910. Decade by decade the theme is developed further in the form of individual biographies (arranged by date of birth rather than alphabetically). Seven of her protagonists are still alive and were interviewed for this book. From leisure to sporting use, from the first motorcycle designed specifically for a woman to the first woman in a motorcycle ad campaign, from Wall-of-Death trick riders to the first female motorcycle dealer the book looks at every conceivable facet—except for the reaction/resistance of men/the establishment, the latter a sadly interchangeable force, certainly then and, admit it!, still now. (It should be pointed out that the author found, or cites, little evidence that early women riders were treated much differently than men—until after WW II.)

The book is obviously dripping with period photos of vintage motorcycles—Harleys, Indians, Popes, Aces, Hendersons, Clevelands and more. Aside from the obvious motorcycling relevance, the photos and ephemera (newspaper clippings, ads, postcards etc.) will be a treasure trove for anyone with an interest in that period of history. Clothes, buildings, road density, lifestyle—you will spend hours looking at the photos! All are captioned and credited. The book’s generous 11 x 12″ format allows many of them to be quite large. The reproduction is as good as the source material allows

The Index is thorough enough and lists people, marques, and clubs. The Foreword is by Karen Davidson, the great-granddaughter of Harley Davidson co-founder William A. Davidson and herself a dyed in the wool motorcyclist. If you wonder why several Doobie Brothers and country singer Willie Nelson are quoted on the back cover, realize that Cris is married to Doobie Brothers founding member Patrick Simmons whom she fittingly met at the mammoth Sturgis, SD bike rally in 1989. Sommer Simmons produced a documentary film about pioneering women riders to debut at the 2011 Maui Film Festival.

Posted Under: History, Motorcycles | Author: Sabu Advani | No comments yet