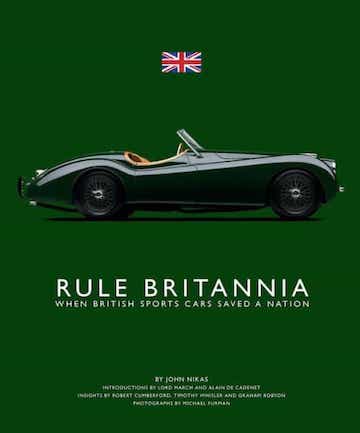 “How did the British motor industry transition from producing relatively few sports cars during the 1930s to capturing the lion’s share of the international market in the 1950s and 1960s, only to disappear almost completely from the scene twenty years later?

Moreover, how did such storied sports car manufacturers such as Austin-Healey, Jaguar, MG, Sunbeam and Triumph surrender their dominant position to the Japanese within the span of a generation, having invented the basic sports car formula in the first place?”

If you want to get a car buff interested in history, or a history buff in cars, this book has much to commend itself.

The specific subject may be British cars but the bigger story is one of global causes and effects. Even someone with only a sketchy grasp of modern history would know that Great Britain came out on the winning side after WWII—but the country, its people, its industry, its currency lay in ruins, broken in all but spirit. The words of the subtitle are not just a cute marketing attention-grabber but signify a hard and harsh truth, made all the harsher by having to acknowledge that, at least as far as the re-emerging car industry is concerned, Britain managed its affairs shockingly poorly. The reasons why, and what makes British cars British, is what this book examines in the form of eight case studies of specific cars. 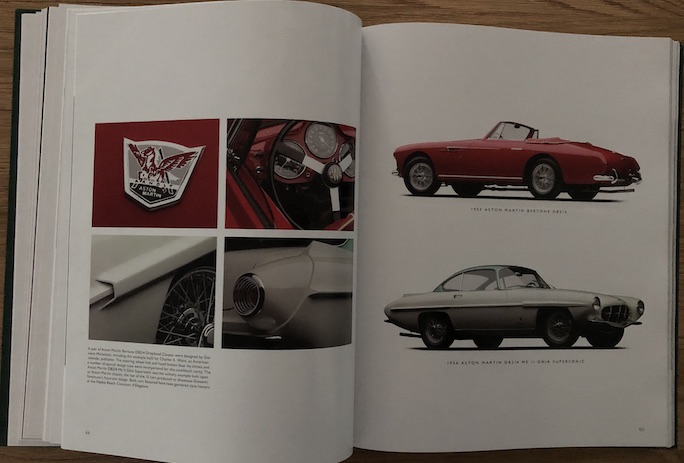 It is nice to hear that people—readers as well as reviewers—“learned a lot” from this book since it came out in 2017, but that also means that too much of this important story has already been forgotten too soon. Having grown up around British cars Nikas has written stacks of books and articles about British marques and models, about everything from collecting to repairing to racing. If you’re into British cars, especially with a sporting flavor, it is almost not possible to not already have his work on the bookshelf or to recognize him as the Communications Director for the world’s oldest and largest supplier of British sports car parts, Moss Motors. He wrote this book this way to remind us, once more, that every time we see a British car of the 1950s and ’60s pass by we should see it as more than just a pretty machine. A book review is no place for a history lesson so we will try to impress upon the reader who is not already familiar with Cash & Carry, Land-Lease and the Marshall Plan and the Killer Winter of 1946 the severity of Britain’s plight by saying that the loan the country needed after 1945 to survive and rebuild was sooooo large that it took until 2006 to pay off! 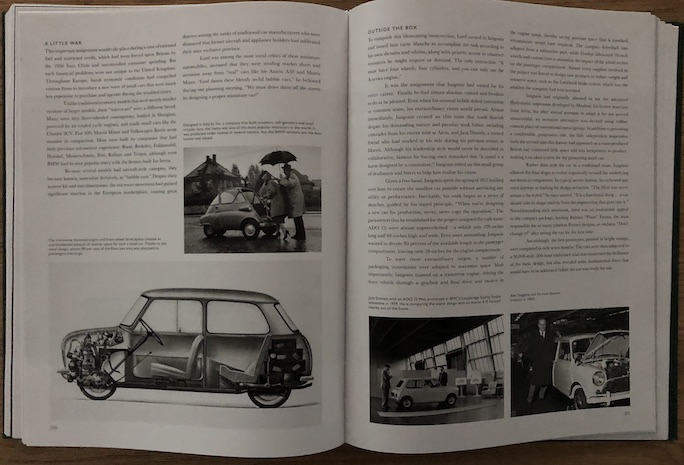 It appears that revered US racer and author Denise McCluggage, a friend of and mentor to Nikas, was the muse behind this book. Quite a number of very established names are attached to this book, both as direct contributors and as re/sources. The two opening pieces are by two pillars of the classic car scene, Lord March and Alain de Cadenet. The latter, quite the skillful explainer himself (alas not in book form) pronounces the text “profoundly researched and delightfully readable.” US design oracle Robert Cumberford muses on what ingredients or qualities make a car “irrepressibly British” and, as is his wont, drops a few pithy remarks such as, “certainly Chevrolet has no interest in broadcasting the news, but the original Corvette is as exact a copy of the XK120 as could be attained with the parts on hand.” He also expands the horizons of the story at this point by introducing into the discussion the ascendancy of Japanese brands. That the British postwar car industry really is quite the unicorn is evident in the fact that an uncommonly large body of archly academic literature has sprung up around it, one of its luminaries being Timothy Whisler who offers here a multi-page summary that hits all the right notes. This section deftly sets the scene for the “Export or Die” national production campaign in which government allocated precious raw materials to those industries and manufacturers that had the best shot at earning desperately needed foreign currency. Which brings us to the eight makes—AC, Aston, Austin Healey, Jaguar, MG, Mini, Morgan, Triumph—that established themselves as the major players. Each is discussed separately, their origin stories and wartime activities recapped before zeroing in on their postwar output, industrial philosophy, and their impact on the markets they were tasked with impressing. 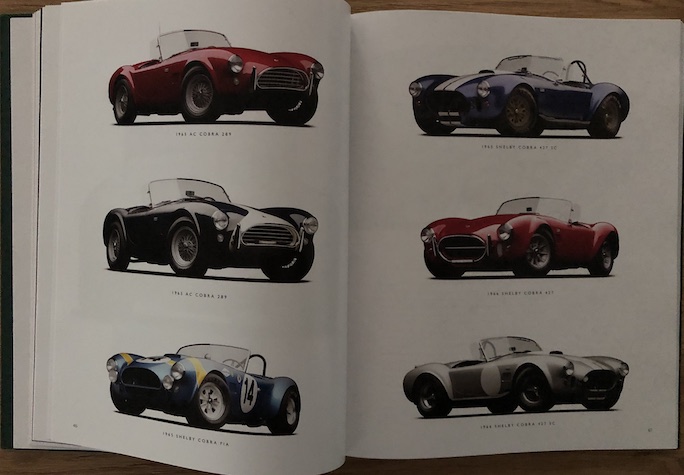 For post-WWII US car enthusiasts, especially Europe-returning vets, British cars were “familiar,” were rather more affordable than, say, Italian machinery, and didn’t suffer the “former enemy” stigma of German cars (and Porsche hadn’t gotten itself organized yet anyway). British cars became the “gateway drug” for a generation of first amateur and then professional US racers. Not least, their low power and pronounced understeer forced racers to learn how to drive smoothly. As UK author Graham Robson says in his Epilogue, the story of how such tangible assets were over time run into the ground by indifferent management, hubris about Britain’s place in the postwar, post-Empire world, and political strife is very complex, and even though there are answers, they lead to ever more questions. (We must call out here a snafu in the Epilogue [p. 287], simply to prevent readers from telling us we don’t know what’s what: [current-day] Bentley is not owned by BMW.) 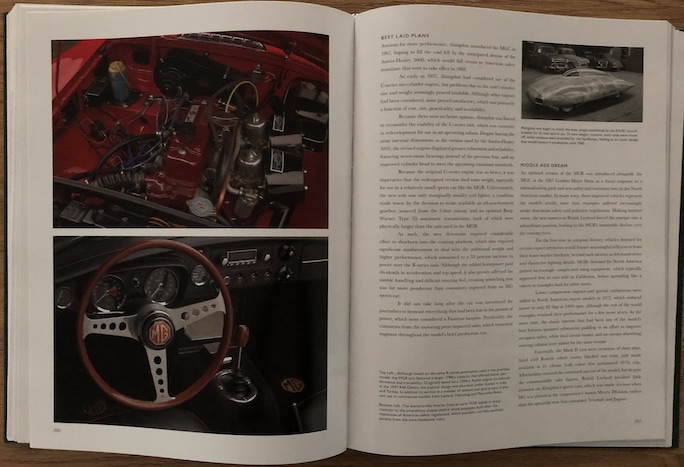 Sports cars were of course not the only type of car that Britain successfully exported and the point of this remark is to lament that even in this book electrical supplier Lucas gets a bad rap for shoddy product. Yes, many of the cars discussed in this book are on the cheap end of the spectrum, which means lower-grade parts, but consider that Lucas was also an OEM supplier to ultra-luxury maker Rolls-Royce, a company that would famously mill its own bolts before running the risk of using a sub-par subcontractor. 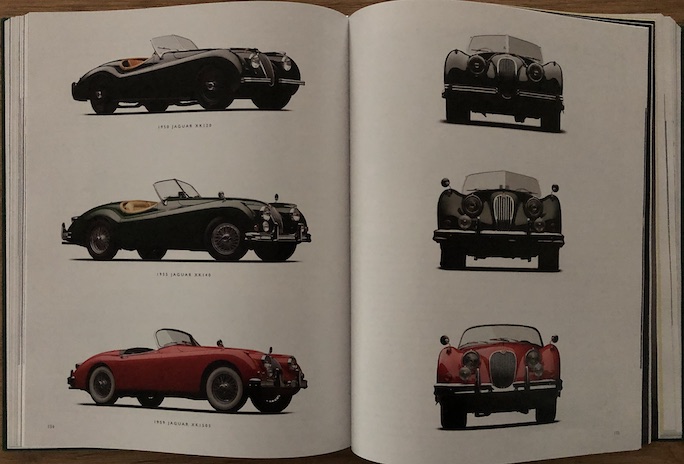 This is a Coachbuilt Press book, meaning Michael Furman studio photos. There are plenty of them, and one never fails to notice that the cars are positioned and lit in such a way as to give a realistic impression on the two-dimensional page of their stance. There are also a great number of period photos from many sources, excellently reproduced and thoroughly captioned. No Index but quite an extensive Bibliography.

Our readers tend to have their ears to the ground so you may heard that at the time this book was published, 2017, Nikas was said to have another one in the works, an 800-page grand opus for Bentley, The British Sports Car Companion. Scratch that, the project was cancelled.