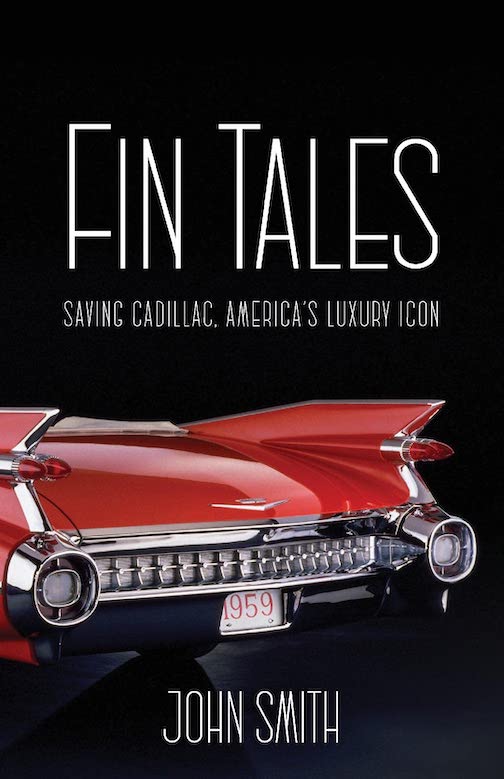 There are only a few industry leaders, such as Bob Lutz, Lee Iacocca and John DeLorean, who have written about their roles. With this book, you can now add John Frederick Smith to this list. He was GM vice-president and Cadillac’s general manager from 1997 to 2000, a time during which the brand underwent a major revival.

The Fin Tales title and the wrap-around image on front and back covers (seen immediately below) of the iconic 1959 model may give a potential buyer the impression this is a book about the half-a-dozen decades ago finned era. Instead, the author begins only as far back as the late 1990s, a time when Cadillac was strategizing ways it might regain its former glory. That said, both the title and choice of cover image point directly to the marketing savvy of its author, who is also the book’s publisher, for it surely is attention grabbing. 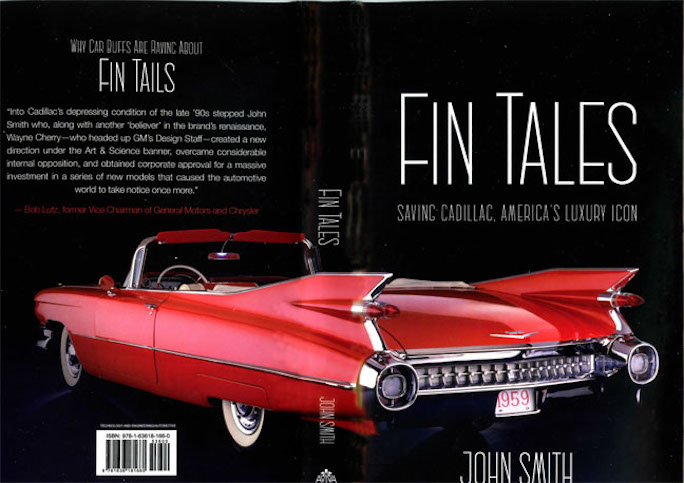 Together with Wayne Cherry, GM’s design vice president at the time, the author tells of their formulating guidelines for a product philosophy that was a fusion of Art and Science. It guided the new styling direction and also encompassed a return to rear wheel drive, re-entering Le Mans racing, and staking an SUV presence in the luxury segment. The morale of dealers needed boosting, as well as the respect and enthusiasm of motoring journalists who had largely written Cadillac off. 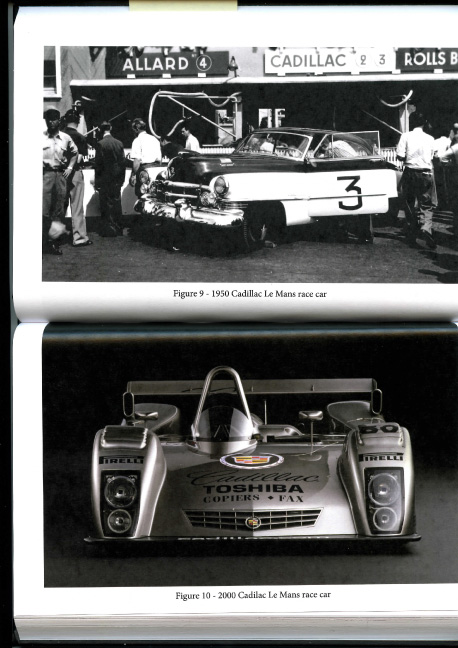 It seems misleading to indicate that Cadillac “re-entered” Le Mans racing when, as this image shows, the newer/current car absolutely was designed, developed, and constructed funded by Cadillac. The vintage image, however, that had been the first appearance of anything Cadillac at Le Mans in 1950 was solely the effort of the late/great Briggs S. Cunningham. To drive the Coupe de Ville shown here, Briggs had tapped brothers Sam and Miles Collier. Today this very car resides in the Collier Collection in Naples, Florida along with the other 1950 Cadillac Cunningham built and entered dubbed “Le Monstre” which bears some uncanny body-shape resemblances to the 2000 entry shown here. (hvh)

Where the book’s author is refreshingly candid is during the telling of how he navigated through the GM maze, encountering opposition and bureaucracy. His conviction and passion did, however, help him overcome and prevail. Readers are left greatly impressed by the detailed analysis, dedication, and intelligence required to address the multiple factors, each of which were needed in order to achieve the marque’s revival.

Here is an extract:

“That night, Michael Grimaldi called. He was GM’s full-size truck vehicle line executive and would be responsible for developing the Cadillac SUV proposal. Over the years, we had worked together several times. We knew one another well and he was reaching out for my thoughts, but he was also in a bind. “I’m not supposed to talk to you,” Michael said. He had been instructed to work on this project without involving the Cadillac team. This was disappointing news, and also unrealistic. We were relatively old hands in product development and valued each other’s thoughts. More importantly, how could the “voice of the customer,” Cadillac, not have a seat at the table? Cadillac marketing had plowed this ground before, and we had plenty of insight into the nascent luxury truck market.” 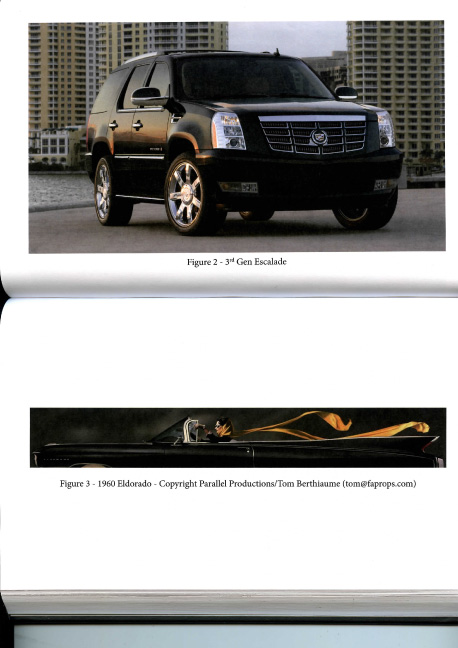 All proceeds from the sale of this book go to a non-profit 501(c)3 called Jeremie Rising that the author and his wife Nancy established and operate. Jeremie Rising provides ongoing relief to fund improving the living conditions for those in and around Jérémie, Haiti, an area referred to as the City of Poets due to the number of writers, poets, artists and historians who have originated in the area.

The twenty images are all grouped together in an insert with a sample or two used to illustrate this review.

This book sufficiently impressed Bob Lutz that he wrote its Foreword. Seldom are we treated to such a compelling book written by a high-level corporation insider in which he reveals the behind-the-scenes of how he made it all happen.