Route 66: The Empires of Amusement 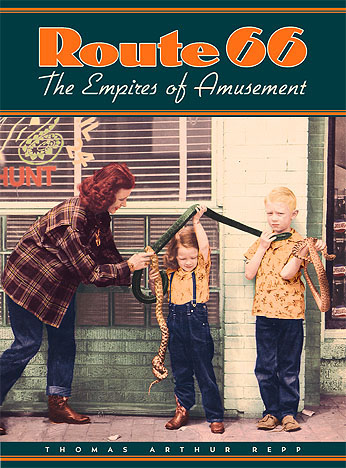 Considering the avalanche of Route 66-related books on the market it is inevitable that there is some overlap in what the various books cover. Some are little more than blatant copycat rehashing of long-established, oft-repeated fluff and their main purpose in life seems to be to cash in on a certain wave of uncritical nostalgia.

It is reassuring to note that Repp’s book was received positively by the inner circle of established Route 66 writers such as Michael Wallis (Route 66: The Mother Road) or Jim Ross (Oklahoma’s Mother Road). Sort of like going to an ethnic restaurant and seeing “natives” there. Presumably they know what’s what and their presence legitimizes the joint.

Repp does cover a new facet, especially in terms of the photographic record, but it is rather on the fringes. His focus is on the carnival folk that set up shop along certain parts of Route 66. What the book doesn’t say, what none of the reviewers say, but what ought to be clarified nevertheless is that the circumstance that entertainers sought out Route 66 has more to do with necessity being the mother of invention than any intrinsic quality of Route 66.

The argument has a certain “chicken/egg” quality, but examining cause and effect forces the conclusion that it is good marketing, more than anything else, that market makers followed their market when the market left its previous playing field. The unspoken implication that it was otherwise only dilutes the cause of Route 66 preservationists by irrationally imbuing the highway, even one that has been made the stuff of “legend,” with mythical qualities. Enthusiasm, although understandable, collides here with scholarship, as evidenced by these colorful quotes from the introduction: “[This] path of pavement . . . has gained new ground as the darling thoroughfare of an autobahn-weary world” or “The road lies forever enshrined as the weeping ribbon that carried the Okies west and a Corvette lover’s lane through which one might cruise after Buzz [sic] and Tod.” Seems a bit risky to fully max out the hyperbole meter in the first 10 sentences of the book and still hope to be perceived as anything more substantial than a circus barker. Candy is good; too much candy makes for an upset stomach. . . .

But, no matter “who’s first” on this “weeping ribbon,” the fact remains that these two—and many other—factors came together and created a unique strand in the fabric of automobility in America. If nothing else, Repp’s book reminds us that everything has its time. Not everything comes back in fashion. Travelers of the original Route 66 may not have thought back then that they were encountering a unique moment in time, something that will not come back on its own strength nor be repeatable as some PR exercise. The world is too different a place now. Those who only know Route 66 through the distorted fun house mirror of Popular Culture may wistfully wish for less complicated, slower-paced days where, it seems, people’s imaginations were not yet so oversaturated that they couldn’t be genuinely entertained by the novelty of piano-playing chickens or titillated by the Snake Man at Silver Star Court.

The book’s 200 new and vintage photos have largely not been published before. That, in and of itself, regardless of its Route 66 connection, validates the book’s purpose. Undeniably, Repp has done a great deal of research in his six years of traveling Route 66 and provides a heretofore missing piece to the puzzle, especially the oral histories in his interviews with the original protagonists or their offspring. His writing style is, well, unique. Whether you call it inspired or contrived, the result is the same: it forces you to slow down. Do note that this volume covers Illinois through Texas only; a second volume focuses on the tourist attractions of New Mexico, Arizona, and California.

The book has a bibliography and an index but no map. The Route 66 novice will note with irritation that none of the attractions are specifically identified by state; the text does provide clues but they have to be stumbled across.

Pity that, of all pages, the very first ones are plagued by a formatting problem that corrupted most of the apostrophes. Other than that, Mock Turtle Press has produced a beautifully designed, typeset, and bound book.

Posted Under: Adventure | Author: Sabu Advani | No comments yet

American Cars, Trucks and Motorcycles of World War I »
« The Ferrari Phenomenon: An Unconventional View of the World’s Most Charismatic Car