We Were the Ramchargers: Inside Drag Racing’s Legendary Team 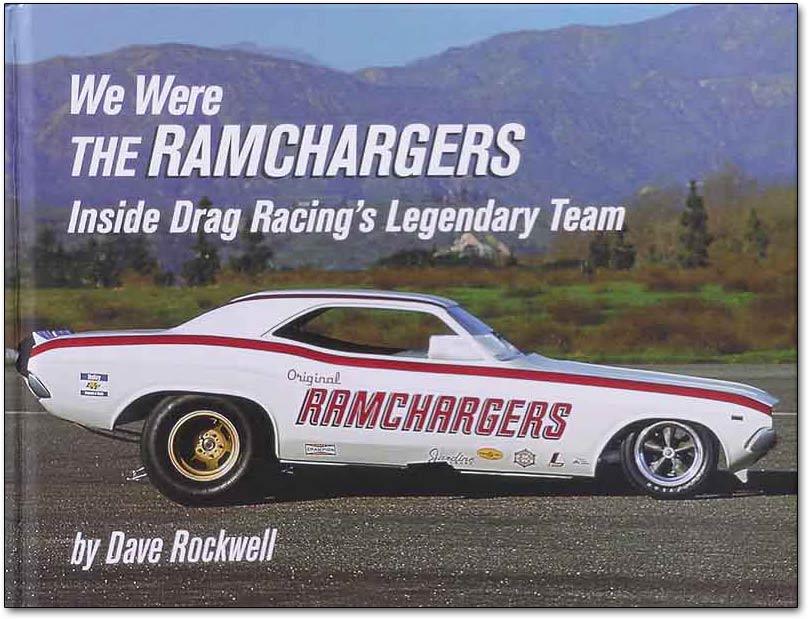 If, as statisticians tell us, there is a 98 percent chance that at least one of the air molecules in your lungs came from Julius Caesar’s last breath, then it stands to reason that at least a few of the other air molecules probably passed at one time through one of the Ramcharger’s Chrysler Hemi racing engines. This is a humbling thought for us car-centric folks, and especially for drag racing enthusiasts.

The Ramchargers were a group of like-minded young engineers who formed an after-hours racing team to transform Chrysler’s stodgy image and make it into a performance brand. From the 1950s through the 1970s, this group of technologists became one of the most successful drag-racing teams in history—winning races, breaking records and bringing home national championships to a manufacturer that was often perplexed about all the fuss.

Dave Rockwell started out as a teenaged kid hanging around the Ramcharger’s shop, eventually becoming a full-fledged Ramcharger as he worked his way through college. His book, We Were The Ramchargers: Inside Drag Racing’s Legendary Team takes the reader back to the earliest days when a bunch of guys, who liked cars and had the necessary engineering background to understand what they were doing, set in motion a research project that would dramatically change the sport of drag racing. Rockwell, who today is an adjunct professor of clinical psychology at Michigan State University and a practicing psychoanalytic psychotherapist, interviewed more than 40 former Ramcharger teammates, executives, competitors and track operators, and quotes magazine reports of the period in order to explain how the team became so successful.

The book opens with this quote from Walter P Chrysler: “The fun I had experienced in making things as a boy was magnified a hundredfold when I began making things as a man. There is in manufacturing a creative joy that only poets are supposed to know.” Rockwell uses the first few chapters of the book to introduce the young men who would become the Ramchargers. He details their childhood interests and the events that brought many of them to the informal gatherings in Chrysler’s lunchroom which would eventually result in the formation of a club, and then a racing team.

The irony is that although the Ramchargers worked at Chrysler, primarily as engineers, the company initially had little interest in their activities. Even after the team began having significant success, enough so the company allowed limited use of corporate resources and materials, it was strictly an off-the-clock project. Their activities were often unpopular with the “serious” executives and engineers at Chrysler whose job it was to produce “basic” transportation.

Tom Hoover, a researcher, graduate physicist and one of the original Ramchargers was designated engineering coordinator for performance in 1962 by his bosses at Chrysler. Hoover recalled: “In the long term there would be a price to pay. The old guard doesn’t forgive you if you are perceived to stomp on their toes where there may have been doubts as to whether or not they could do it. They have long memories, and generally speaking, they would get you. Certainly this was not going to be a good career move within the company.”

Despite, or perhaps because of, the lack of interest by most of Chrysler’s upper management the Ramchargers produced a string of innovations that ensured success on the drag strip. Each race was looked at as an opportunity to experiment and further the state of the racing art. So when the team developed tuned intake and exhaust manifolds, or experimented with multi-link suspensions or developed high-stall torque converters, they did so with the cold calculating eye of an engineer. This approach led to consistent success They broke many of the time barriers in drag racing: The first 11-second quarter mile (1963); the first 9-second pass (1965); the first 8-second run (1965); the first 7-second run (1967), and the first 6-second quarter mile pass in 1970.

Rockwell’s book is not a lightweight read. He is detailed in his description of men with whom he worked and the passion they felt for drag racing and Chrysler performance. The book is not just about the glory that accompanies victory, but also the hard work, the sacrifice, occasional tragedy, the late nights, the long drives, and the frustrations that any racer will recognize and understand comes with winning. The layout of the large-format 9 x 11 inch 280 page book is dense with text that is broken up with more than 225 black and white photographs and the occasional technical drawing. At the beginning and end of the book is a montage of color photographs. Many of the photos that Rockwell has found have never been published before.

We Were The Ramchargers tells a story that has long been missing from the history of American automobile racing. The fact that this history has been told by the people who shared the hardships and the victories will make it a valuable resource to future car enthusiasts who will wonder how drag racing and the American automobile evolved during the 1960s.

Posted Under: Automobiles, History, Racing, Rally, US | Author: Kevin Clemens | No comments yet

Galveston’s The Elissa, The Tall Ship of Texas »
« The Automobiles of the Maharajas