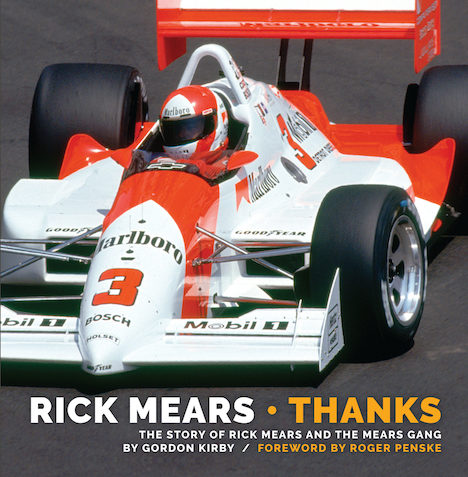 “. . . Thus reads the gospel of one of automobile racing’s greatest, smoothest, and most sportsmanlike drivers. He may also be racing’s most underappreciated, unadorned genius, a humble, entirely unpretentious man whose deft touch at the wheel is equaled by his quiet eloquence in revealing and explaining his career and the sport that made him famous.”

Winning is currency in sports. Retired American race car driver Rick Ravon Mears (b. 1951) has a long list of successes—four-time Indy 500 winner, three-time Indycar series/World Series champion, the first Indy driver to earn $10 million—but the more meaningful measure of success for him is to be regarded by his peers as what his former team boss Roger Penske describes here in the Foreword as “one of the fairest, cleanest drivers in racing history.” Not only did Mears stay with that one team his entire racing career (aside from a couple of apprenticeship seasons) until retiring in 1992, he remains with Penske Racing all these decades later as consultant and mentor. How unusual is that?? So, yes, Thanks, Rick Mears! 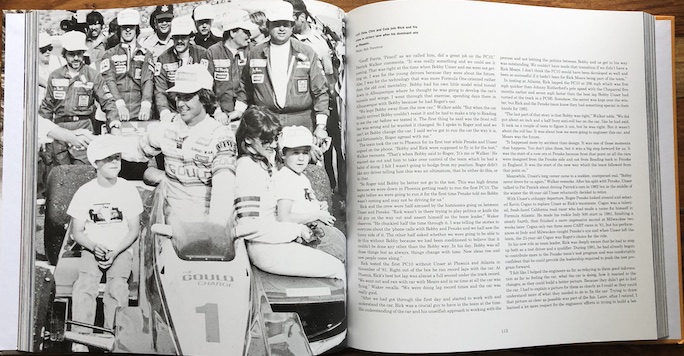 “That’s what racing was all about to us as kids growing up. It was figuring out how to get by the next guy, but doing it the way it ought to be done. We always wanted to shove back a little if anybody shoved at us. But you don’t want to initiate it. If someone does it to you, there’s a payback when the time comes, if it’s necessary. You don’t feel bad about it then, but that’s the only circumstances when you’ll lean on anybody. You never initiate it.”    —Rick Mears

If the book title sounds familiar it is because this is the second time around. First published in 2008 by Crash Media Group (which was acquired the next year by Icon Publishing) as a softcover (ISBN 9781905334308) the new Racemaker Press edition, now upgraded to hardcover, appears to be an exact reprint—down to, groan, the typos and the microscopically small type in the photo captions and, smaller still, the results tables! Considering that CMG was the publisher of such reference-level books as the Autocourse (for which Kirby has written the annual American season review for decades), Motocourse and Rallycourse annuals those missteps were an embarrassment the first time around but for Racemaker to simply not bother to correct them now is an unforced error. 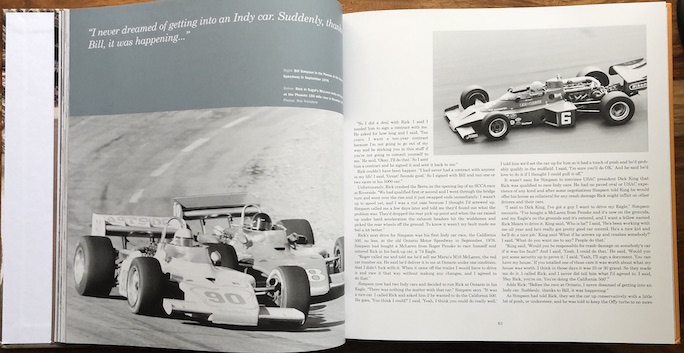 Since the technical specs of the cars are really not what the book is about you’ll have to supply your own commentary. The captions list people and places. 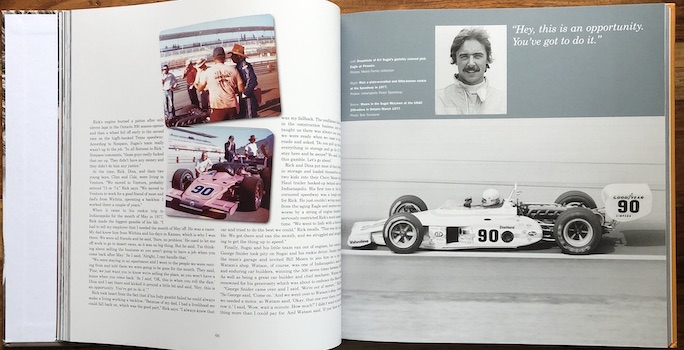 Reading this book right now is especially apropos because in a few weeks (April 7) the Road Racing Drivers Club will honor Mears on the eve of the Long Beach Grand Prix as one of “auto racing’s most influential leaders and icons.” Even if you followed Mears’ racing career all along, this book neatly buttons everything up.

Kirby has tended to various patches of the motorsports garden since the 1970s, taking up full-time journalism after a few years as Formula Ford team manager and almost fielding an all-American Formula 3 team in England for 1973. This allows him to bring a wide frame of reference as well as personal experience to his writing. 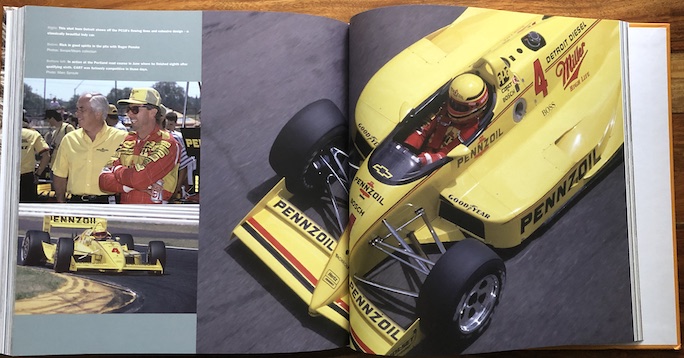 There are so many eye-level shots of Indy cars that they begin to look all the same—and then you wake up again when you see this lovely overhead.

Pretty much any auto/biography begins with the protagonist’s background. Character and values don’t come out of the water tap, they are observed then emulated so for the reader to come to appreciate that “Mears’ way of racing, working and living is a fine lesson for all of us” Kirby has to rewind the tape back one generation to Rick and brother Roger’s parents and even further to their grandparents. And yet, the brothers’ racing careers had drastically different trajectories, not least because their personalities were different. Nature versus nurture—there’s drama right there. 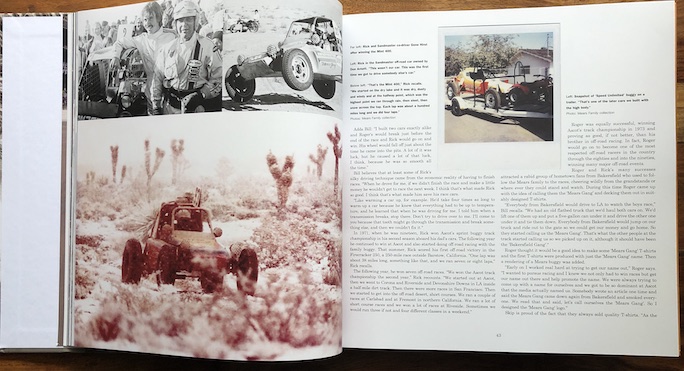 Anyone who reads this book from the aspiring racing driver’s perspective will find some useful story lines here: riding motorcycles smoothly; keeping a buggy upright through the desert; managing the car to finish the race, ideally with enough prize money to go to the next one. These elements are so important that the first 6 of the book’s 22 chapters develop that theme and lead up to his Penske years.

Throughout, the lively prose brims with quotes and reminiscences from colleagues, competitors, and family. The narrative is on the one hand easy to take in as a whole thread but sometimes bursts into such granular detail that any lapse in attention or pause to chew on something will have that proverbial “drinking from the fire hose” effect. No way around that, in this kind of book, but an Index would have helped! Technical minutia is almost absent and even those references that involve more detail—cf. car setup/handling, and steering feel which was of supreme importance to Mears’ comfort level in a car—are kept to broad concepts.

The “Mears Gang” referenced in the title involves more than just the active racers among the family members but it is Rick’s younger brother Roger to whom most space is given, not least because he raced at the same time. 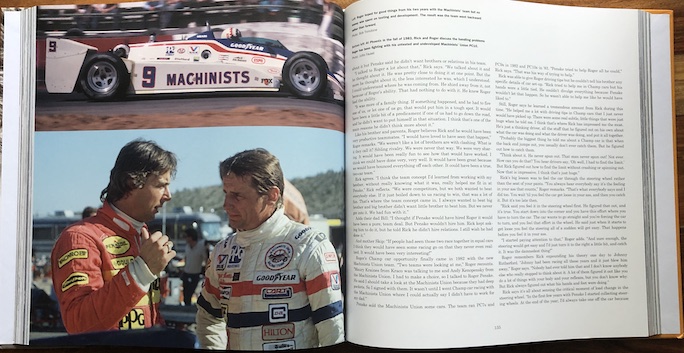 The brothers Mears in conference. Roger drove for the Machinists’ team, and he was good enough for Rick to recommend to Penske hiring him. How different their lives would have turned out if, either, they had been on the same team or swapped teams. Clearly, the Penske Racing organization is a key factor in Rick’s success. 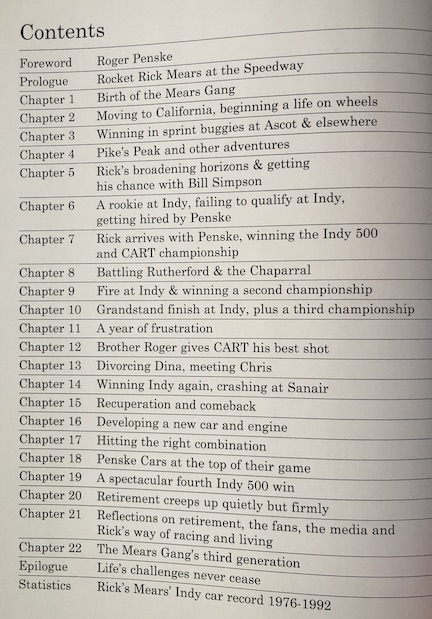 Reading a biography front to back is just the way life itself unfolds: you never know what will happen next. If you started reading at the end, with the Epilogue, you’d have a shock to the system . . . the long-term toll of the 1984 accident that almost cost Mears his feet, the heavy drinking, a second divorce . . . it is a full life, warts and all.

Spanish Republican Aces »
« Toymaker: My Journey from War to Wonder