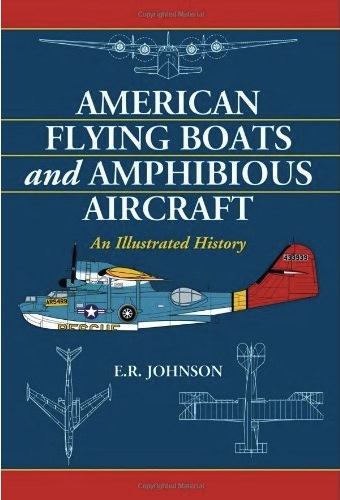 “As early aviation pioneers discovered, creating a flying boat was not a simple matter of grafting part of an airplane onto a boat hull.”

First things first: a flying boat stays on the water, an amphibian doesn’t have to it because it also has wheels. What they have in common is that their fuselages serve as the means of flotation—just like a boat’s hull—as opposed to a floatplane that uses bolt-on floats or pontoons for buoyancy.

Written by a third-generation flyer, this nicely thought-out and very useful book presents almost 100 years of American-made or -designed craft that have the capability of operating from bodies of water (lakes, rivers, open sea). The scope ranges from homebuilt Air Car (drives, flies, floats) to the famous Clippers to supersonic attack seaplane, and even if you know nothing about the subject, this list alone hints at the wide range of design parameters and technical issues involved.

As a practicing attorney (general law, estate planning & administration) Johnson can safely be assumed to have weighed the pros and cons how to best encircle his subject. Just so that readers may calibrate their expectations correctly, the subtitle “An Illustrated History” should not be taken to mean that this story is told in the form of blow-by-blow linear chronology. Rather, divided into three principal eras, the book is first and foremost a catalog of the flying inventory organized alphabetically by maker and, within that, chronologically by type. On the one hand this approach allows the reader to more clearly follow the evolution of technical issues, especially in relation to a specific maker, on the other hand it is less easy to maintain an organically growing appreciation of overlapping developments or the changes in operational and general aviation aspects. To address the latter, each of the three parts—Early Era (1912–1928), Golden Era (1928–1945), Post-war Era (1945–present)—is introduced in like manner in the form of a Historical Overview discussing Aeronautical Progress, Military Procurement, and Civil Developments.

Part I also includes a general Introduction of sorts that lays out the origins of flying boats/amphibians. Less is said about the why than the who, in particular American aviation pioneer Glenn Curtiss who was, in fact, not the first to successfully launch under his own power from water but certainly the one who made the longest-lasting and widest-ranging contributions to the field.

The first few pages in a book are a good indicator—barring, as here, a Preface or other explanation—of an author’s assumptions about his readership. The language and the concepts Johnson employs appear to presume basic familiarity with the working parts of an airplane; not unreasonable given this rather specialized subspecies. If you’ve never noticed that some wings are shaped differently than others or where and how they are attached to the fuselage, or that some engines have a propeller in front and some in back then you’ll probably have some catching up to do. And even if you do know your airplane anatomy, and even with one of the three glossaries devoted to aeronautical terms, there is still a bit of nomenclature that is probably not in your everyday vocabulary and will need to be looked up elsewhere. This applies specifically to boat-related terminology such as scow or tophamper etc.

Each maker is introduced with a brief synopsis of company history and highlights. Each type is introduced with a data set of basic specs (detail depends on what is still known today) and dimensions. The descriptive narrative ranges from a few paragraphs to a few pages. The most distinctive attribute of this book is that each type is shown in a scale three-view (front, half top/half bottom, side) drawing by Lloyd S. Jones (who did several books for Aero Publishers in the 1970s). It may sometimes look like it but these drawings are not proportionate to each other. They are, however, correctly dimensioned, which is especially noteworthy considering that some of them had to be “reverse engineered” from photos when no original blueprints or engineering drawings were available. The illustrations do not show the dimensions; those you look up in the data panel which is in most cases on the same or opposite page.

Photos are plentiful, quite well reproduced, mostly page-width, and properly captioned (no credits). One caution: the Introductions to the three parts contain page references to aircraft mentioned. This is a really good idea, expect that especially in Part I most refs are off by a page or two. Slightly more cumbersome is that references to the Appendices give no page number but only the aircraft name—but they are also divided into the same three parts as the main book and each part is set separately in alpha order (meaning: if you are directed to look up “Fairchild 91 in App. B” there are three possible places it could be).

Airplane geeks will zero in on Part I with its many long-defunct makes, and on Appendices A and B that cover lesser-known variants and design concepts. In terms of specs and hard data the information is naturally thin here but even these craft are shown in three-views. A third Appendix contains three Glossaries; a Bibliography directs you to other books and websites; the Index is sufficient and makes it very easy to find types/variants.