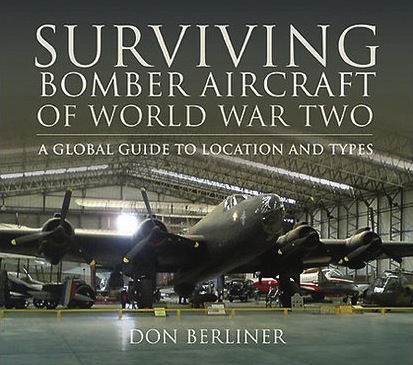 More than just a museum guide, this book is also a mini history of each of the aircraft it presents.

Part 2 of this author’s trilogy about aircraft that survived WWII deals with bombers of all stripes (attack, light, medium, heavy, very heavy, patrol etc.). Needless to say, these distinctions can be fluid and the only practical application of this observation is that a particular aircraft you might expect to find in this book isn’t here. It may be in the first volume if its primary role fell more into the fighter category, or, in the case of multi-engined bombers, more likely in the third that hasn’t been released yet and will deal with trainer and transport aircraft. Even with this in mind, it seems an anomaly that any of the three volumes should include experimental aircraft but this book covers the Douglas XB-42 Mixmaster.

If you have volume I, you’re ahead on two counts. First, only it contains the names and addresses of the major aviation museums. Second, you can and should read its Introduction once more to refresh your memory about Berliner’s methodology. As many questions as that left open, it was better than the one in vol. 2 which is even less enlightening as to how the contents is organized.

As before, aircraft are divided by county which is sensible enough. In the case of US entries, aircraft are further divided by branch of service although this time the Table of Contents does not list them. Now, US aircraft type designations are more specific than almost anyone else’s and Berliner covers them in ascending order by type number (B-10, B-17 etc.). There is no Index so the reader must already know the type number and not the name (Flying Fortress etc.) or the maker (Martin, Boeing etc.) to find anything. If you think that’s hard, wait until you deal with the other countries! Why should the UK’s Vickers Wellington come before the Handley Page Halifax which is followed by the Avro Lancaster? My guess is that they are listed in order of first flight—but that is a very tall order for a reader who doesn’t have all such minutia memorized and will really aggravate a reader who turns to this book to learn just that. Actually, the data panels that accompany each entry don’t even list production years or numbers but only dimensions and basic performance specs.

The copy on the dust jacket has carried over verbatim from the first volume and will cause the same confusion it did there. It says that each “spread contains a colour photo of an example of the aircraft as viewed in an aviation museum, examples of different marks (wartime shots in mono) and a textual resume of the type with statistics.” If you took that to mean that each museum aircraft is shown in color you’ll find that this is not so. And although “museum” does most often imply a static display, some of the airworthy restored craft are shown in flight. While different marks are discussed, none of the photos have captions so you can’t know what mark or even which serial number at which museum you’re looking at! This lack of specificity everywhere it matters and which would be so easily remedied weakens the book especially for the reader new to the subject.

Since the primary purpose of the book is to identify the museum/s at which an aircraft is displayed it is puzzling why Berliner makes no definitive or even implicit statement whether or not a museum he lists is really the only place on the planet that has that aircraft. Is it, for instance, really possible that of the 10 Japanese bombers covered, only one is in a Japanese museum, one in Bangkok, and all the rest in the US? And that the three Italian bombers are all and only in Italy?

Appended is a list of “extinct” bombers by country, which, presumably, means that not a single copy is known to exist in a museum setting presently. When completed, the trilogy will encompass about 350 basic and 150 sub-types. The books clearly have a place but just as clearly could be/ought to be more thorough, and as a much-published aviation historian Berliner is clearly capable of it.