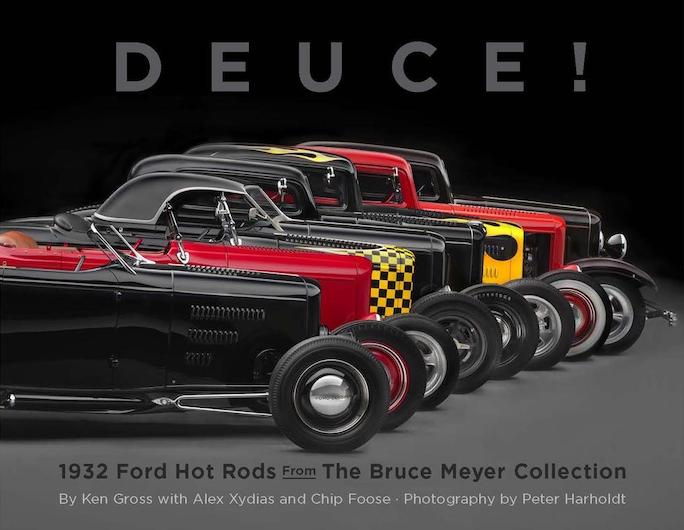 “You are never too old to have a happy childhood.”

Car enthusiast/connoisseur Bruce Meyer, these days in his late seventies, has been saying that for a long while, and he is certainly living it. He’s no longer in “acquisition mode” and even when he was it was rather unsplashy and extraordinarily specific, always seeking out only those cars that jived with his highly personal criteria. You’ll get a very good sense for that in this book.

If we postulate that nothing is done without a reason then we must take note of the fact that the type on the cover is basically shades of grey against a dark background, meaning the photo is given top billing. (As if to make up for it, if you remove the dust jacket you’ll find the front cover emblazoned with just the word DEUCE! in big, metallic red letters.) And that photo really is a strong, striking visual. If you don’t already know what this book is about you might think these are just any old kinda similar-looking hot rods that someone spent way too much energy lining up just so. But when you see “Bruce Meyer” and that these are 1932s (which is of course why they have that moniker, Deuce), and if you know anything at all about the hot rod world today, you realize that these eight are—no exaggeration—the Holy Grail. If you can’t bring yourself to go that far, accept, at least, that they are Meyer’s Holy Grail. He’s had Deuces on the brain since that first balsa wood model of a highboy roadster he had as a kid.

The restored car (bottom left page, and right page) doesn’t match any of the iterations in these period photos—because they were all departures from the original.

One of the captions says, “Seldom have so many legendary figures worked on one hot rod.” The story of the Bob Morris Roadster, and really all the cars in this book, and in Meyer’s collection for that matter, embodies another of his mottos: “Buy the best example of what you want, and pay whatever it takes [ditto for the restoration]. That way, you cry only once.”

And a few more names. If you know about cars and car books you know these guys and you know to dial your expectations up:

A good example of the many period photos in the book.

As always, photo books make you want to go straight for the eye candy. Alright, get that out of your system first if you must but then do go back and actually read the words, especially the front matter. If you are a cynic you might lean towards dismissing this book as just another navel-gazing exercise: a rich guy showing off. A retail/real estate businessman Meyer is undeniably the former, but he is not the latter. Not even remotely. Anyone who has interacted with him would tell you that his enthusiasm for preserving and using cars, no matter their value or rarity, and sharing that experience with anyone of like mind, is as boundless as his commitment to look beyond his own collecting habits into the wider world of giving cars their due as exemplars of art and science and cultural heritage. It was Meyer who spent years lobbying the Pebble Beach Concours to add a Hot Rod class, or the U.S Postal Service to put hot rods on a postage stamp, and it was him devoting resources to finding important hot rods and restoring them sensibly that elevated the cars and anyone who had—and would again have—anything to do with them. Not all the legends of old are still with us, and the late rodder/customizer Pete Chapouris (1942–2017) deserves special mention because he brought so many of the Meyer cars back to new life. He also re-established, not least because of the momentum Meyer generated with his 1992 unveiling of the restored Pierson Brothers Coupe, the famous So-Cal Speed Shop founded way back in 1946 by Alex Xydias (b. 1922). Almost a centenarian now, Xydias wrote the Foreword to this book. You’d have to have a heart of stone not to be moved by his memories of the arduous journey from (almost) outlaw to respectability, and how impactful it was to reconnect with so many of his brothers in arms at that 1992 shindig of Meyer’s which he calls “the best party anybody had ever thrown for hot rodders.”

Automotive Hall of Famer Ken Gross can always be counted on to present the Big Picture. In his introductory remarks he too examines the hot rod community of old making a distinction between hooligans and kids who wanted to have good, clean fun with cars. There is a whole lot more to be said on that subject, and it has been pretty much said elsewhere, so he focuses here on the role of the National Safety Council.

On to the eight cars. By the way, that cover image was originally intended to be a poster; and the cars were not maneuvered around the studio with a yardstick but on the computer screen—which sounds easy but isn’t.

Xydias calls them the best of the best, and there’s no quibbling with that. While all Deuces, they seem to have little in common: different running gear, different build philosophies, different output, different purpose but each advancing rod design and culture in its own significant way. Chip Foose offers enlightenment. Calling this Art Center honors student an “automobile designer” seems to be wholly inadequate to the multitude of projects his firm Foose Design does these days. Let him open your eyes to the “appealing timelessness” that makes the Deuce the “quintessential hot rod” and how the three primary body styles—roadster, 3-window, 5-window—read. Foose is the youngest-ever inductee into the Hot Rod Hall of Fame so he’s seen a thing or three.

Each car is described in its own chapter, interspersing commentary by Gross, Meyer, and quite a number of the original builders/modifiers. There can be no question why Meyer who as a schoolboy considered hot rods unattainable (besides being severely discouraged by his family) declares hot rods his first love and why they make up such a large number in his car collection (to which a separate chapter is devoted) that spans everything from investment-grade bluebloods to Top Fuel Dragsters to a hydroplane.

The narrative is on the one hand sweeping but on the other, at times, unexpectedly veers into hyper-specific shop talk: “. . . a filled and peaked front spreader bar in frame horns that were shortened . . .” Also unexpected is the amount of typos; they seem to cluster in those bits that were submitted, probably in writing, by various sources. It’s probably stretching it to think they were left as is in order to preserve “authenticity,” the latter being the key guiding principle in Meyer’s restoration philosophy. In practice this means that he knowingly, willingly will return a car to a “lesser” spec or level of technology. In the case of a hot rod, which by definition is a “bitsa” cobbled together on a budget, this may well frustrate subsequent owners who made the car “better”—examples abound in the book—but now see their improvements tossed out just because they weren’t first. No universal answers here, certainly no “right” ones, but then that is ultimately the goal of this book and Meyer’s particular way of looking at things: to start a conversation. Speaking of which, if you were to knock on his garage door or run into him at a concours or even just the gas station (incidentally, gas station mechanic would be his dream job), he’ll have one with you!

The book is available from the Petersen Museum Store.

How the Watch was Worn: A Fashion for 500 Years »
« The Road to Pickletown