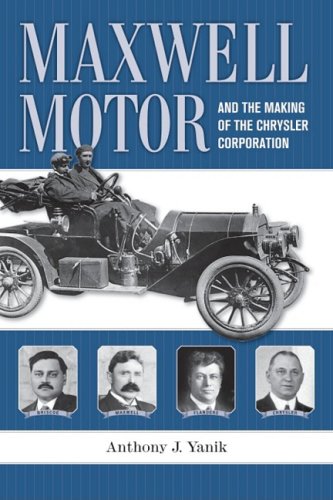 So much as been written about the early history of Ford Motor Company and General Motors, we might be excused from assuming these two were alone responsible for the development and popularization of the American low-price car. It is good to be reminded that there were other talents that arose at the beginning of the century to cut new paths that would be followed by the rest of the industry.

This book tells the story of Benjamin Briscoe and Jonathan Maxwell, a pair of Detroiters without formal higher education whose ambition led them to the fledgling automobile trade. They met through their association with Olds Motor Works, that incubator of so many future rivals. Briscoe was a successful sheet metal fabricator and parts supplier to various car manufacturers; Maxwell received his training in the shop of Charles Brady King, builder of Detroit’s first car, and later designed the Northern runabout.

Over its twenty-year history, Maxwell typically placed in the second tier of producers and annual sales never exceeded 75,000. Most of its plants were located in the east far from Detroit parts suppliers. A virtue was made of this by the stated policy of internal manufacture of components but growth might have been stronger with access to the broader industry.

Maxwell history is neatly divided in half by its disastrous involvement in the United States Motor Company combination assembled by Briscoe whose business methods closely modeled those of his friend, Billy Durant. The holding company collapsed within two years and Maxwell was the sole unit to survive and be reorganized. Maxwell and Briscoe resigned to be replaced by Walter Flanders, the brilliant manufacturing executive and alumnus of Ford and E-M-F. During his five-year contract Flanders quickly nursed the company back to health while correcting its inefficiencies. Eastern plants were sold off to centralize manufacture in the midwest and models reduced to a single low-price line. Although Flanders left Maxwell in good condition, the company was soon overcome by the postwar recession of 1920. Once again it found itself, like General Motors and Willys-Overland, in the arms of its creditors. This time, Walter Chrysler was the knight errant and the outcome of the story is well known.

Author Yanik has given us a thoroughly researched work with good balance between business history, product development, and motorsports which Maxwell exploited to good advantage during its early years. It is enriched with detail from company records now located in the Chrysler Archives. Fortunately Yanik did his research years ago since those archives are no longer open to historians. The chapter on Flanders makes the book in some ways a sequel to Yanik’s The E-M-F Story: The Story of Automotive Pioneers Barney Everitt, William Metzger, and Walter Flanders, the definitive work on that company but now out of print. Readers are advised to avoid disappointment this time. Those who wish to have a good understanding of the development of the American automobile industry need to own this book.

This review appears courtesy of the SAH in whose Journal #243 it was first published.