Kidnap of the Flying Lady: How Germany Captured Both Rolls-Royce & Bentley 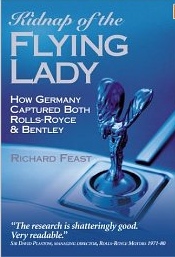 A catchy title—that makes sense only to people who already know the story. Or think they know. Fact is, it will be another few decades before the material facts of this episode will become unsealed. At any rate, the “Flying Lady” of the title is not some trapeze artist like the “Flying Wallendas” but one of the nicknames for the hood ornament that since 1911 adorns the Rolls-Royce radiator shell, more properly known as the Spirit of Ecstasy. By describing her as “kidnapped,” Feast, according to the subtitle and his general premise, paints a picture of Germans surreptitiously making off with the crown jewels of British automobiledom.

A cleverer writer would have consulted his thesaurus and seen that the word means “taking away by force and holding prisoner, usually for ransom.” A cleverer writer still would have realized that this is just the right word—but for making an entirely different case than Feast.

Namely that the Flying Lady, which here is shorthand for the iconic Rolls-Royce trademark and its enormous commercial value and which is at the very core of this complex story, was indeed “held hostage for ransom”—and not by the Germans but the entity that was appointed in 1971 by the British government as custodian of the trademarks: Rolls-Royce plc, a separate entity from the car manufacturer and the maker of Rolls-Royce aero, military, and industrial engines and ancillaries. Already the reader will observe that this is not a simple story.

Much revelation was expected of this the first book to investigate the background of the 1998 sale at auction by British defense and industrial concern Vickers of one of its corporate assets, Rolls-Royce Motor Cars (which since 1931 includes Bentley). Limited, ambiguous, and inconsistent public disclosures at the time of the auction and in its aftermath left many unknowns as to the true motives of the principals, i.e. Vickers the seller, Rolls-Royce plc the trademark holder, and Volkswagen and BMW as the competing bidders. At the heart of the matter, and of the book, is an issue that is literally worth billions: an allegation widely bandied about in the press at that time and repeated ad nauseam by a public giddy with schadenfreude that Volkswagen Group—the winning bidder—had “overlooked” the all-important fact that in buying the physical Rolls-Royce assets they had not, in fact, acquired the trademarks. So, while VW owned the factory, the workforce, the know-how and every paperclip on the premises, they could not actually build a car and call it “Rolls-Royce.” Instead R-R plc granted a license to build and market properly branded Rolls-Royces to the competing bidder, BMW, a firm with whom they had a long-standing relationship. VW was forced to surrender after three years time the right to manufacture R-R cars for a pittance to BMW. Gripping stuff!

If this were a novel, a yarn, fiction, I would wholeheartedly recommend the book as a riveting read. But as a record of real events and of legal matters, this book is not worth the paper it is printed on. Feast is a journalist; and an investigative journalist’s job is to infer, deduce, theorize. Nothing wrong with that. He does have the decency to admit that he “wasn’t there” but claims to have had “a full account of who said what to whom” through “extensive disclosures . . . by contacts in the industry.” Since none of the principals are legally at liberty to comment, no one can refute Feast’s claims! One doubts that this is the way proper reportage is taught in journalism school. From the subtitle to the last argument, Feast shows his hand and his bias. His storytelling leads to the outcome he chooses, dismissing the inconvenient grey areas that are the only thing the few currently known undisputable facts permit.

The critical reader will resist being expected to simply accept Feast’s word at face value, especially since some of the cornerstones of his interpretation of the events are so tendencious (such as the roles assigned to Piëch [VW] and Robins [R-R plc]—the former a fool for misjudging the BMW/R-R plc relationship, the latter selfishly holding the R-R badge hostage, to the detriment of the car company. By contrast, 1971–80 R-R Managing Director David Plastow, who has endorsed the book enthusiastically (and who also wasn’t in the room!), is portrayed as a heroic figure during his years at the helm—an assessment history is hardly likely to endorse with similar enthusiasm.

Check back here in around 30 years when the real story can be told.

A good third of the book is devoted to a basic Rolls-Rolls history, with particular emphasis on the 1971 receivership and the role of Vickers in R-R’s affairs. For those new to the subject this summary provides solid context in which to see the roots of subsequent developments. His treatment of that part of the R-R era of which little has been written to date does offer some tidbits that advance our understanding of what happened: that Prince Jefri of Brunei and his elder brother spent some £150 million a year between 1994–1997 at R-R, amounting to half (!) the company’s total annual revenue; the effect on BMW and VW of Mercedes’ interest in R-R and their reasons for bringing to market the Maybach (that car never came close to R-R sales and was killed in 2011); that opposing bidders Piëch [VW] and Pischetsrieder [BMW] held weekly top secret meetings throughout the entire pre- and post-sale phase.

This last point, however, makes it all the harder to accept certain of Feast’s premises. Even after repeated and most attentive study, at the end one is left with fewer answers than questions as to what and when VW knew about the disposition of the R-R trademarks. Matters aren’t helped by the fact that Feast lists no sources whatsoever!

It must have been a slow year when the UK Guild of Motoring Writers saw fit to bestow on this book its 2003 Pierre Dreyfus Award, sponsored by Renault UK (Dreyfus was president director general of Régie Renault from 1955–1975), for having made “the most outstanding journalistic effort during the year in any medium.”