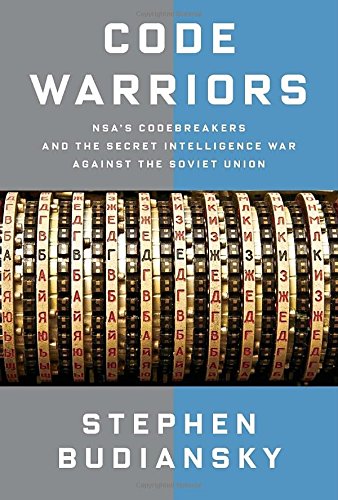 Code Warriors details the convoluted history behind of the origins of the National Security Agency, founded in 1952, and explains, to quote the author, “much that is both admirable and dysfunctional about the NSA today. At its best [the NSA] galvanized innovation in computing and higher mathematics, delivered vital intelligence on foreign threats available in no other ways, and deftly and brilliantly targeted key sources with technical and espionage wizardry. At its worst, it obsessively pursued the unattainable grandiose scheme of collecting literally every signal on earth, undermined communications and Internet security for everyone, evaded legal oversight, and became the victim of its own secrecy with an unchecked culture of impunity, obfuscation, and byzantine bureaucratic politics. Reconciling the inherently clandestine and often dirty business of intelligence with the principles and ideals of an open democratic society will never be completely possible. But understanding how these things came to be is one place to start.”

In the book’s introduction, Budiansky discusses the moral implications of Edward Snowden’s revelations, and the NSA’s three large illegal domestic intelligence projects; the Bulk Telephony Metadata Program that compiled a record of every phone call made in the US; Prism, which gathered up billions of emails passing through the US on their way to other countries; and SIGINT, which inserted backdoor vulnerabilities into supposedly unbreakable public encryption systems, making them breakable by the NSA and others. All three of these NSA spy programs were illegal and knowingly in violation of the Fourth Amendment’s basic privacy protections. Ironically, none of these three programs, according to the National Security Agency itself, produced anything tangible in the way of foiling terrorist plots.

For Budiansky, Snowden’s release of previously secret overseas NSA spy activities, “soon crossed the line from defensible (domestic) whistle-blowing to reckless exposure of necessary ongoing foreign intelligence operations” including the worldwide revelation of NSA’s ability to monitor the radio transmissions of the Taliban in Pakistan, the successful bugging of twenty-four foreign embassies, and a technical description of devices capable of intercepting foreign diplomatic fax messages. With these three foreign operation exposures, Snowden displayed “an astounding historical and moral blindness in lumping all these (foreign and domestic spying operations) together” as equally reprehensible. It is, after all, NSA’s job to gather intelligence on foreign powers in order to remain cognizant of international threats to US security. The legal and moral barrier was crossed, Budiansky points out, when the National Security Agency began blindly spying on all US citizens, no matter their patriotic commitment, or threat level, to the US way of life. This spying on all US citizens for no other reason than the fact that it could be done, is a clear violation of the US Constitution that sets the ground rules for the operation of the domestic side of the National Security Agency.

Half of the appeal of this book for me was learning a bit more about the history of US spy programs since WWII and their successes and failures. The other half was a curiosity about what the now antique secret code-generating machinery looked like and how, in a general way, the machines worked. The visual gearhead side of my brain was catered to by the author with examples of additive key encipherment, how the five-bit paper tape used in Russian Baudot teleprinter encryption device worked, and a simplified schematic of the infamous World War II German Enigma machine, tracing the encryption route through the rotors, and a similar schematic for the later Russian Failka version of the same basic concept.

Pictured in the book’s 16-page central photo section are German and Russian encryption machines including the aforementioned Russian Failka. From the US side, a KL-7 is pictured, along with the Russian “rotor reader” that spy John Walker used to map the wiring of the more complex US Navy KL-47 used by US missile carrying submarines. Walker’s successful application of the “rotor reader” made the Navy’s top secret missile sub communications readable to the Russians. Also of interest are maps, including the flightpath of the 1950s US electronic surveillance plane shot down by the Soviets in international airspace off Latvia, the first of 12 “incidents” that by 1964 had claimed the lives of 90 US airmen.

Budiansky recounts the historical interplay of the fourteen US intelligence gathering agencies constantly vying with each other for power and control over the distribution of the unique secret data collected by each. Dark Shakespearean personalities intertwine with Faustian bargains to achieve turf-guarding victories between the various US intelligence agencies, creating a bureaucratic environment where control of the secret becomes more important than the secret itself.

The book opens with a two page list of Abbreviations to help the reader work their way through a world composed of the AFSA, ASA, ELINT, GC&CS, MGB, PFIAB, TICOM, USIB and 25 other security acronyms. Following that is a 9-page Author’s Note introducing the reader to the topic and laying the foundation for the rest of the book. A Prologue, “A Catalog of Disasters,” recounts the near total failure of “classic covert operations inside Russia” beginning in 1949 that literally killed the era of one-on-one human spying. The first of 10 chapters, “The Russian Problem,” recounts World War II cryptology challenges, before moving on to “Unbreakable Codes,” “Learning To Lie,” “Digital Dawn,” “Shooting Wars,” “Brains Versus Bugs,” and other interesting chapters of like ilk. An Epilogue finishes the narrative, followed by five Appendixes dealing with code breaking in abbreviated detail for those readers interested in the use of Bayesian Probability or the Index of Coincidence. Chapter Notes, a comprehensive Bibliography, and an nice Index conclude the book.

Budiansky was a national security correspondent for the US News & World Report and contributed articles to many publications including The New York Times, The Wall Street Journal and The Economist. He is also on the editorial board of Cryptologia, an academic journal concerned with codes, codebreaking, and cryptologic history. In addition he has authored 15 books, six of which deal with military and intelligence history. In short, he knows the topic and writes well, making Code Warriors an informative read.