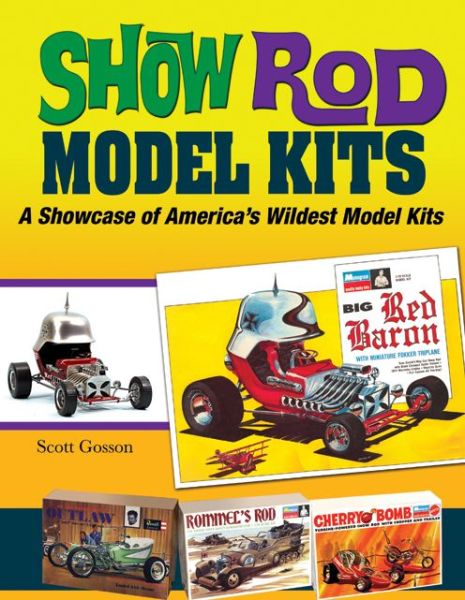 “Wild show rod imagery continues to haunt the subconscious until it ultimately can’t be repressed any longer. At that point, we must lay out a show rod chassis design on the garage floor and begin flinging sparks, start collecting the show rod model of our dreams, or both. There’s no other way to continue on without going incurably insane. That’s just how it as. Alas, economics dictate which path to pursue, and many of us find ourselves on the short end of the dollar.”

So, whether you collect scaled-down kits or full-size ones (c’mon the “real” cars are fundamentally just kits too!) this book is an entertaining guide to the world of show rods. But if the book whets your appetite for kit building, realize that new issues or even re-issues don’t happen often anymore (there’s not enough of a market for them) and unassembled original period kits can cost some serious money. If you have the skills to build from scratch . . . you might as well built a full-size rod! 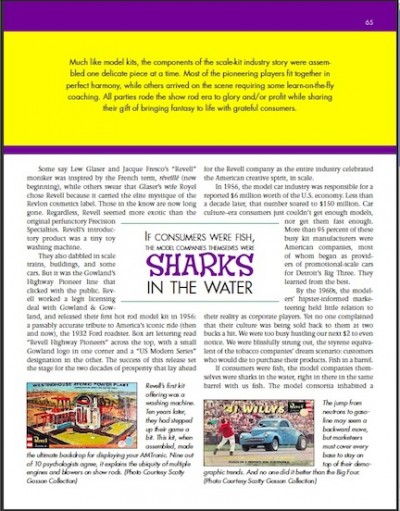 Let’s begin at the end, the very end—the back cover. It makes the curious comment that “this book covers what was often the inspiration for all those crazy show roads: the model kits themselves.” Sure the book covers model kits—but the implication that small-scale models, if they racked up big sales numbers, would lead to 1:1 models is the rule and not the exception seems unsupportable. The Foreword by John Greczula, long-time caretaker of the AMT and MPC brands and with the fanciful job title of “Model Kit Development Director,” likewise implies this happened “numerous” times, but, really, more often than not it was the other way around: model kit makers brought in people from the 1:1 world to design or consult on the kits. 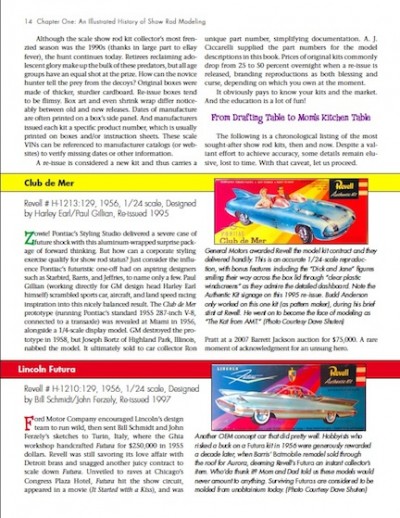 Show rod connoisseurs know of course that this same author wrote a book about the real show rods two years ago. This model kit book is the obvious and necessary companion piece. The reason it didn’t come out sooner is that Gosson admits to needing to do his own homework first.

As with the previous book, the new one has benefited from a large cast of characters that moved heaven and earth to help put a definitive book on this rather under-represented subject on the table. From folks at some of the model kit manufacturers to collectors and builders (scale and scratch) and show organizers, you can be confident that the proverbial pillars of the community have had a hand in it. 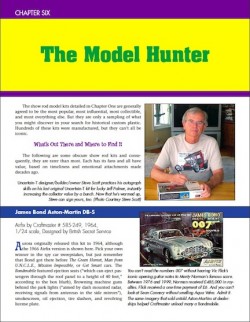 The first chapter takes up an entire third of the book and presents 37 of the most popular and/or most collectible kits in chronological order by original release date from 1953 to 1975. If you are more familiar with names than dates, or if your kit is a post-1975 reissue, start on the Table of Contents. In all cases the box art is shown along with the built kit, sometimes also the 1:1 car or other noteworthy material such as magazine covers or assembly sheets. Another batch of some four dozen models is covered in similar manner but as a separate chapter (“The Model Hunter”). The explanation offered for this separation is that the second group is “obscure and consequently rarer than most.” (Incidentally, the Club de Mer that starts the book says that Pontiac’s original 1:4 model last traded hands at auction 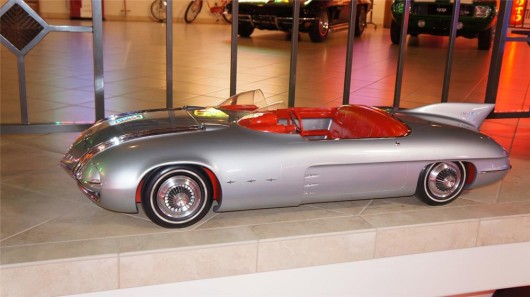 in 2007 for $75K; shortly after this book was published the model was auctioned once more, fetching less than half the 2007 price. Someone got a good deal on a unique piece of history!) 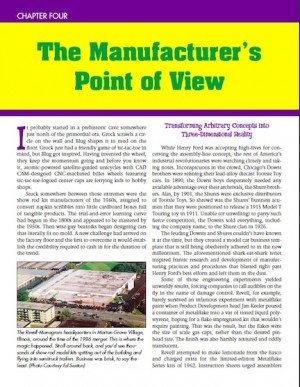 Elsewhere, the book also covers some ready-made models and figurines, commentary from the manufacturing side, photos from Fisher Body Craftsman’s Guild shows, interviews with insiders, collectibility and pricing, how to get involved and progress in the hobby, and the work of three scratch builders (advanced hard-core stuff, this—if you flunked chemistry and physics proceed with caution!)

You can judge by the page/photo ratio that this is a heavily illustrated book but many of the photos are small and so there’s plenty of room left for Gosson’s entertaining way of turning a phrase. If you’ve not given kit modeling a serious thought before, just consider that one group calls itself NNL—the Nameless National Luminaries. How could you not have fun with such people? Despite the name, though, they’re serious about the hobby so better read the book first!