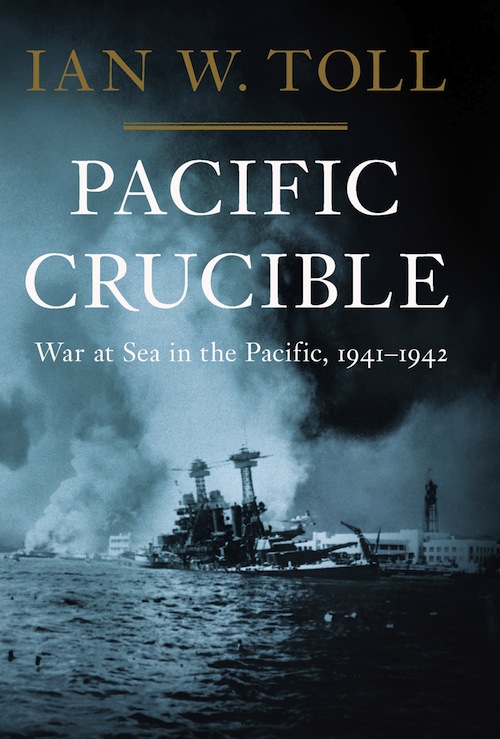 Inevitably a question pops into one’s mind when considering Pacific Crucible: Is there really a need for yet another book on the first six months of the war in the Pacific?

It is with some hesitation, even reluctance, that some of the better-read will approach Toll’s book covering the early months of the war in the Pacific (roughly December 1941 to June 1942, from Pearl Harbor to the Battle of Midway). They will have read at least several books covering this period or parts of it. This book does not appear to be written with them in mind. Instead, it serves as a very good introduction for the general reader or someone newly interested in military and naval history of the period just before the Japanese attack on the US naval base at Pearl Harbor until the days immediately following the battle that took place in the air and on the waters near Midway Island. On that level, the book has much to offer these readers.

The dramatic early months of the American war in the Pacific, ranging from the attack on Pearl Harbor, the Philippines campaign, the defense of Australia that led to the clash in the Coral Sea, the efforts to crack the Japanese codes, and, of course, the great American triumph at Midway are, frankly, the stuff of melodrama. It is this quality which attracts both the writer and the reader to the subject again and again and again.

To his credit, the story that Toll offers is, in my opinion, well written. When covering familiar ground, it often the prose that makes the difference and that is certainly true in this case. The book was what can be best described as a “good read,” that is, the story flowed and, yes, it had that tinge of melodrama which added a dimension to its telling.

Although one can nitpick Toll’s book—as some have—that does not affect the thrust of the story. Yes, one would wish that he knew, for instance, the difference between a “tanker” and an “oiler” or pay a bit more attention to some of the minutiae regarding the code-breaking  operations at Pearl Harbor, but this sort of thing is not overly critical here.

While Pacific Crucible does cover familiar ground, it does so in such a way as to be both interesting and even informative. Toll, a naval historian with an award-winning history of the U.S. Navy under his belt, makes an effort to place the events within a larger context as well as how they are—or are not—connected to one another. It was this aspect of Pacific Crucible, along with the prose, that makes this book one of those that I would recommend to someone interested in the period.

Also available as an eBook (Kindle and Nook)

Posted Under: History, Other Genres | Author: Donald Capps | No comments yet

Stretching It: The Story of the Limousine »
« Motorsport Explorer