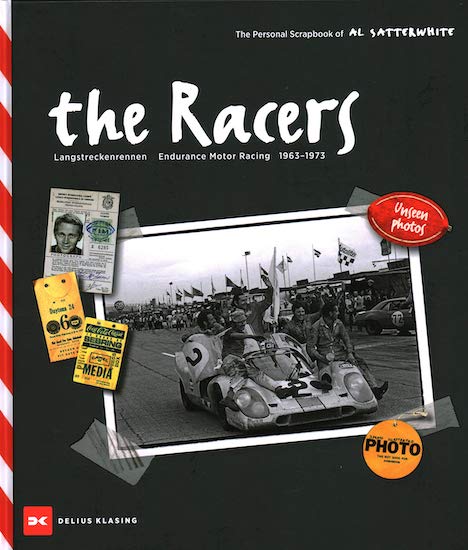 “The really great thing about race coverage in the 1960 and ‘70s was that it was a growing and changing sport, constantly transforming as new ideas came into play. Restrictions were few and photographers were even fewer. I had great access to drivers and all the action as long as I was careful and didn’t get in the way. I was treated like one of the boys.”

(English, German) The decade portrayed here represents an era of singular excitement and innovation in motorsports. On the US side two events stood out: the 24 Hours of Daytona and the 12 Hours of Sebring. That both were/are in Florida was just dandy for young Satterwhite (b. 1944) who was going to school there. Look at the race dates; look at his date of birth . . . high school! Already he was dabbling in photography. He is still at it today, not as a dabbler (who was really only biding his time until he could get into the Air Force Academy) but a properly respected artist with museum shows and buckets of national and international awards and a Photographic Archive held at the University of Texas. So there. 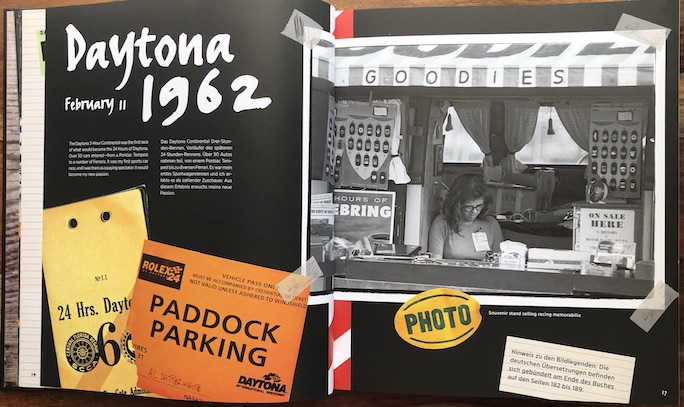 A magazine article in recent years described Satterwhite as “a manifestly identifiable photographer” which is really more applicable to the many genres in which he would come to work as his career progressed. The motorsports photos on display here have a different flavor, not least because they were not necessarily intended for publication but are from, see subtitle, his personal scrapbook. The book is, in fact, laid out like a scrapbook, with faux adhesive tape and tucked-in, overlapping images and memorabilia. 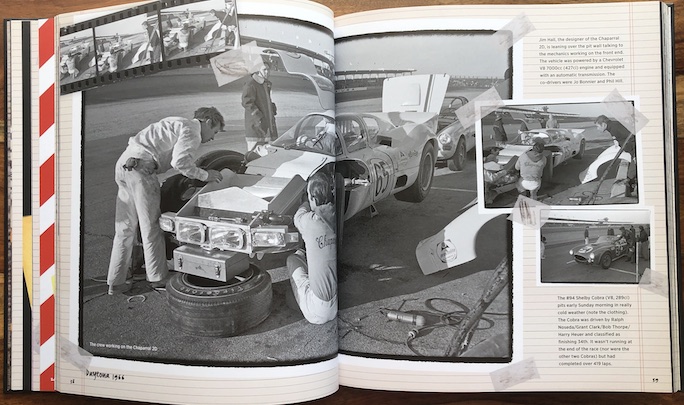 These photos are more about “being there” than any sort of forensic documentary approach. But the captions are very detailed nevertheless.

On the one hand there’s not much to review here but rather to describe. As to the former, the book contains minimal text and mainly photos with captions, and the subject matter is self-explanatory. As to the latter . . . where to start? 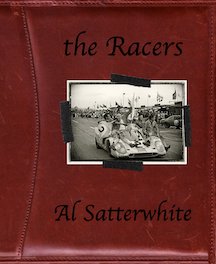 The title seems a good place, not least because it’ll make folks who’ve been around books for a while wonder if this is a case of, as Yankees Hall of Famer Yogi Berra is supposed to have said, “Déjà vu all over again”. Well, kinda.

Oddly, the Impressum of this German 2020 publication says nothing about the fact that a book with the same main title and fundamentally the same contents appeared in the US in 2012 (ISBN 978-0984920211). That book had half the pages, which makes obvious sense because it was in only one language, but it was limited to only 100 numbered signed copies in a custom metal case with a laser-etched cover, came with two 8×10 archival prints, and featured quality printing on card stock. It used “the new lay-flat technology” which means just what it says: the book opened fully flat, thus no image detail getting lost in the gutter, definitely a luxury touch and eminently suited to a photo book. It was expensive then ($750, gasp) and is Unobtainium now. So, the new German book ticks a lot of boxes! Besides, Satterwhite isn’t planning any more motorsports photo books, so The Racers is the one to get while it is print. 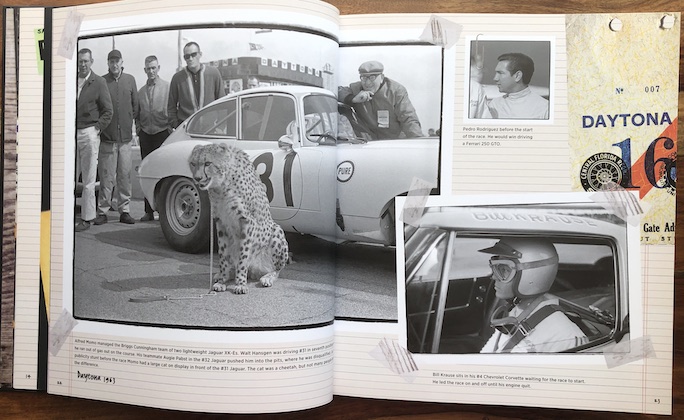 The car is a Jaguar but the cat is a cheetah. Close enough. Everyone is keeping a respectful distance anyway. The fellow leaning on the fender is Alfred Momo who engineered this publicity stunt for the Briggs Cunningham team he was managing. 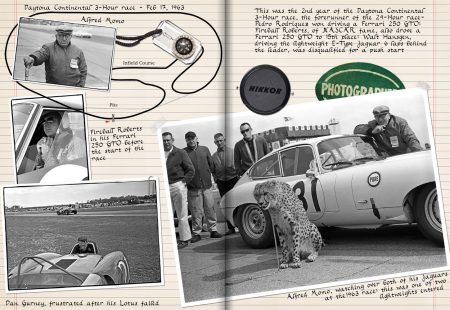 The same spread as above in the original book, just for comparison.

The layout now is different but the basic flavor and concept of the book is just as before. The Foreword is by Brian Redman and the Afterword by David Hobbs who each approach the subject from the racing driver’s perspective while the Intro by Satterwhite explains his MO.

Even though this is a German publication, the English text comes before the German and the photo captions are only in English (they are translated into German on a few pages at the back of the book). There isn’t a Table of Contents because none is needed: the coverage is in chronological order, alternating between Daytona and Sebring. Each event is preceded by some narrative highlighting people, cars, and other pertinent bits. An interview with Bob Bondurant and a lap of Daytona seen through Redman’s eyes round out the picture. 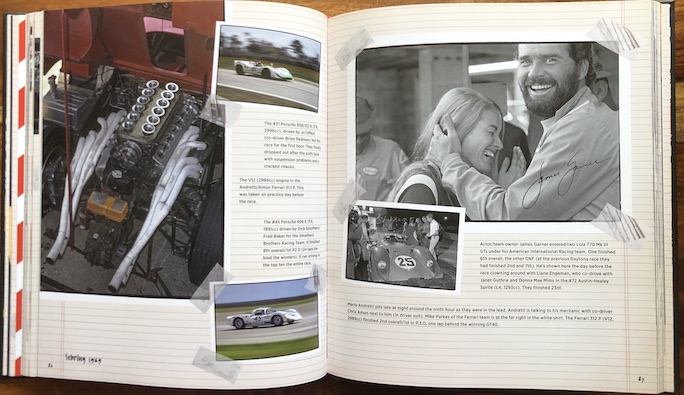 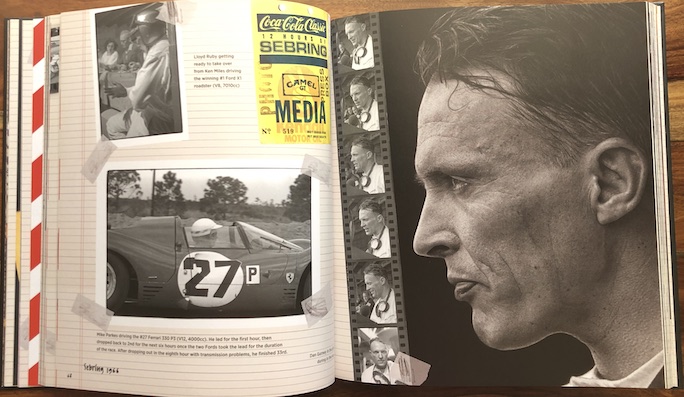 The “point” of the book is not clinical, exhaustive race coverage or even context. Consider, for instance, that the 1970 Sebring race talks about the Revson/McQueen Porsche 908 without even mentioning how that connects to the movie Le Mans. No arguing that the whole “scrapbook” approach makes the book very approachable to anyone who really isn’t a motorsports geek and merely wants a taste of what all the fuss is about—and fuss, for those who can rattle off all the storied names and epochal happenings of the era, there is aplenty. Even old hands will probably/certainly see things they know with fresh eyes. 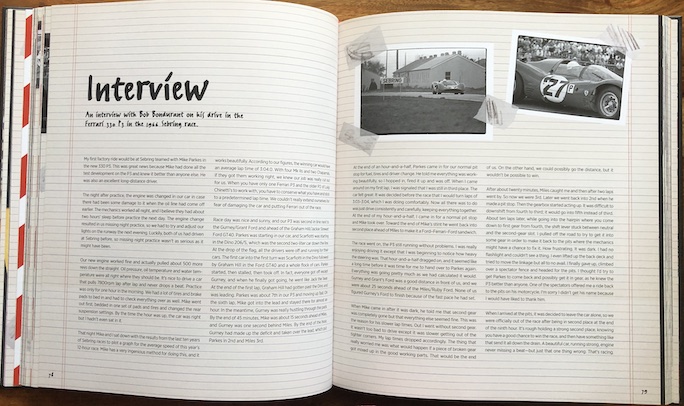 The English and the German text that follows it are the same—but the photos are not. 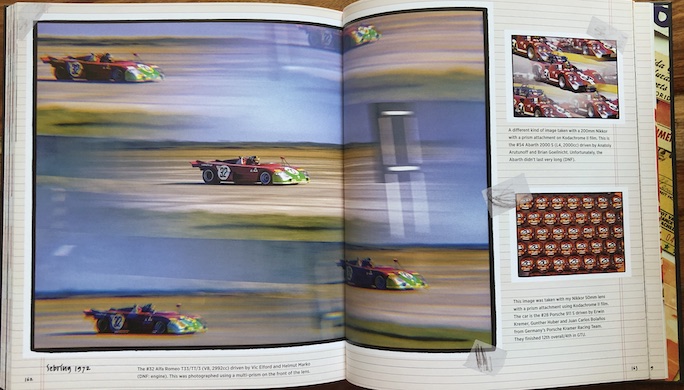 From the “Fun With Photos” department. Satterwhite trick photography. These photos and quite a few others list film, speed, lens etc.

The Personal Scrapbook of Al Satterwhite