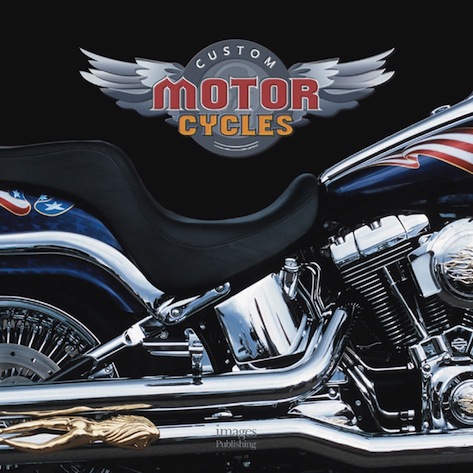 A custom motorcycle is a very visible, and often very expensive, way of telling the world you’re different. In a world full of mass-market, cookie-cutter consumer goods anything custom is certainly worth a closer look. And look is pretty much all you can do in this book because there is minimal explanation—kind of like watching a foreign movie without subtitles. And whoever said “a picture is worth a 1000 words” must not have had this book in mind.

The technical finesse evident in the cover shot, and learning that the photographer is a professional raises expectations. In the Introduction he does communicate his enthusiasm for motorcycles and the backstory to these photos but beyond that the reader is left entirely to his own devices to interpret or appreciate or even just recognize what is being shown. All we’re told is that the photos are from trips to the USA and from events in the authors’ native Spain. It’s up to your own forensic skills to figure out what country you’re looking at, what sort of motorcycle, what specific event or location and—this being, presumably, the whole point of the book—exactly what it is that makes these particular bikes special.

Obviously, any book that contains more photos than pages means that it’s all about the photos. But no matter how plentiful they are, the lack of narrative or specificity hamper the reader’s ability to get much out of them. It’s easy enough to deduce from license plates or street signage whether a scene is in the US or in Spain but you really have to know your motorcycles to judge from equipment/accessories if it is a US- or Euro-spec machine. And even if you’re good at that, you cannot possibly recognize, unless you are a hardcore custom bike enthusiast, that, for instance, some of the Spanish bikes shown here are clearly those of Ferry Clot Romano—“the king of Spanish customizers” who after years of customizing his own and friends’ bikes opened Hot Dreams Marbella, a small shop with big ideas in 2002. So big that he won the custom bike world championship in Sturgis! This is about as big an accolade as there is to be had in the custom bike world, and anyone who can build—and sell—$200,000 bikes must be doing something right. So why wouldn’t Tres throw his fellow countryman a bone and acknowledge him?

The author (Matheja, who did her own English translation which reads a little stilted) does mention seven builders by name but all are in the US and, needless to say, those seven aren’t even the tip of the iceberg.

It is difficult to evaluate this book as a whole because its constituent parts—text, photos, general philosophy—are so uneven. This is not helped by the unrestrained exuberance of the book jacket drumming up expectations: the photographer is declared “acclaimed” and his photos “extraordinary,” and the narrative “fascinating,” the landscapes “stunning,” and the machinery “awe-inspiring.”

Divided into 7 chapters—more for convenience than thematic necessity—the book presents bikes, riding, meets, and people. Each chapter is introduced by an essay-like commentary that seeks to convey certain aspects of biker culture and lifestyle. Harley-Davidsons feature prominently and they are consistently, but no less irritatingly, deprived of the hyphen between the names. Except for the reader who is totally new to the motorcycle scene the text really does not present any notable insights. We give a typical example: “In contrast to other vehicles, custom motorcycles are intended to be unique and fully customizable.”

Enthusiasm is a good thing but the somewhat unreflected embrace of everything and anything related to bikes and biker culture may well give newbies a rather skewed impression: not everyone prances around in studded leather thongs and ODs on “the beer and barbecue that are so much part of the biker’s world.” (Judging by the waistlines, whether Spanish or American, the latter point may be hard to refute!) Or perhaps it is the foreigner’s rosy perspective of all things “Murrican, such as the belabored biker/cowboy analogies.

Back to the photos then. The bikes obviously are the eye candy. Lacking any explanations it is not possible to discern obvious order or purpose. Vintage stock bikes, modern customs from mild to barely road legal, some in museum or show exhibits, most in street settings. Tres may be a pro photographer but none of the photos in the book are as good as the cover in terms of photographic technique, composition, or post-shoot electronic massaging. Shadows, contrast, highlights, crops are no better than what any amateur would snap.

While the bikes are objectively interesting, the random crowd shots—groups of bikes on the road, throngs of bikes crowding Sturgis, tablefulls of bikers doing the aforementioned beer and BBQ thing—are probably only of interest to those who were there.

So, will this book remind bikers why they’re bikers? will it entice newbies into the culture? will it tell gearheads anything about the marvelous custom work? You’ll have to decide for yourself!