Celebration of Flight, The Aviation Art of Roy Cross 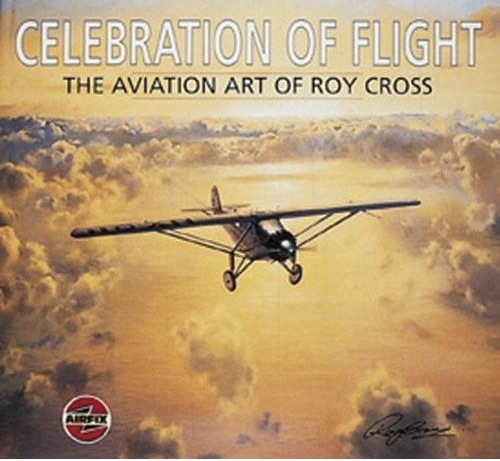 by Roy Cross with Arthur Ward

Since retiring from his freelance job as chief box-top designer for Airfix plastic kits, British artist/illustrator and writer Roy Cross has made a big splash, especially in the US, as a marine artist whose fine-art oils easily command $50,000 nowadays. But his first love was aviation art and this book shows a sampling of it. The work is introduced by Arthur Ward who, while Chief Executive of the London design studio Big Design, had written the 50th anniversary commemorative book on Airfix kits (Airfix: Celebrating 50 Years of the World’s Greatest Plastic Kits). As a boy he was not alone in being drawn to Airfix kits specifically because of their striking box-top artwork. In later years he learned that this was Cross’s work but it wasn’t until he wrote his book that he was introduced to Cross. This, in turn, would lead to Cross inviting Ward to collaborate on the present book. But enough about Airfix. What Ward discovered in working on this book, and what you will discover reading it, is that Cross did a whole lot more than box tops.

Ward devotes some 20 pages to exploring Cross’s development and influences on his work. Cross was born in 1924 and the 1930s produced many things that captured a young boy’s imagination: the giant Zeppelin airships, English aviatrix Amy Johnson and her husband Jim Mollison setting numerous long-distance records, or American Charles Lindbergh’s solo Atlantic crossing in 1927.

Add to that an aunt with a well-stocked library of art books of the highly detail-oriented pre-Raphaelite and neoclassical school and who lived near the de Havilland aircraft factory and you see why Ward calls Cross “air-minded.”

Showing an ability to draw from an early age, Cross visited bookstores and libraries to immerse himself in aviation books and journals and also American pulp aviation magazines. Ward explains Cross’s technique and shows examples of the type of artwork by other people that Cross would have seen and tried to learn from. Happenstance and the outbreak of World War Two would expose Cross increasingly to aviation matters until he finally found himself at Fairey Aviation as a technical illustrator tasked with creating easy to read perspective illustrations to aid service personnel that was not used to deciphering two-dimensional engineering drawings in the operation, maintenance, and repair of aircraft. It is here that he learned—by doing it, without formal training—to draw from engineering blueprints and also from life. All this is most thoroughly illustrated and gives the reader a proper appreciation of the factors that would come to distinguish Cross’s fine art. This section, in which Cross himself is quoted extensively, shows the evolution from technical line art to fully articulated dramatic color work for ads and books.

The bulk of the book consists of a “Gallery” section that shows a collection of his best sketches, paintings, and technical drawings in various media. They are presented in chronological historical order by plane (not by date of creation) and so depict the history of powered flight from around 1909 to the jet age. The artwork is of fixed-wing aircraft and one rocket but there are no helicopters. There are several extraordinarily complex cutaway drawings. At this point it should be noted that each illustration, including those in the first section, is individually listed in the Table of Contents by name and type of aircraft. The captions are by Cross and demonstrate his complete grasp of aviation history and construction particulars. But, unlike other, later books by him, they say nothing about the technique or artistic choices in terms of subject matter, overall composition, alternate proposals etc. Many of these illustrations are full-page and most are in color. One, a Gloster Gladiator Mk I (p. 46) is shown here for the first time.

For readers who want to see examples of Cross’s marine work, there’s a separate book: Celebration of Sail (2004).

The Ferrari Phenomenon: An Unconventional View of the World’s Most Charismatic Car »
« Profiles of Flight: V Bombers Vulcan, Valiant and Victor