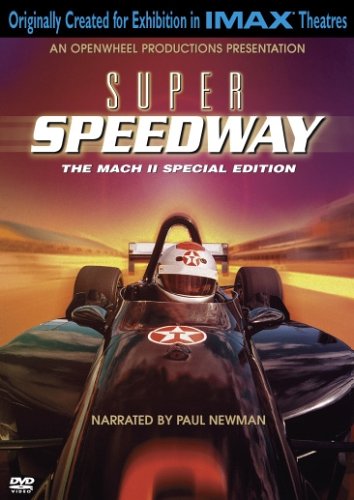 In documentary form, the film cleverly shifts back and forth between two eras, contrasting the restoration of Mario Andretti’s first Indy roadster—the 1964 Dean Van Lines Special—with the creation of his son Michael’s 1996 Lola/Ford CART car. Both Andrettis and their family feature prominently throughout, with excellent narration by Paul Newman.

Having retired a few years before, Mario helps Michael in pre-season testing of the new Lola at Homestead; the car-to-car footage of the father and son “racing” there is fascinating. Afterward, Michael and the Newman/Haas team start a disappointing season. The crew follows them through a few dismal early races then to an uplifting win at Detroit (Michael went on to finish second in the 1996 championship). The action shots of the cars at Road America are amazing, especially those photographed in the rain—and Mario’s (intentional) spin in Turn One.

Meanwhile, Michigan collector-restorer Don Lyons drags the dusty old front-engined Kuzma roadster out of the chicken coop with a Farmall tractor and begins its total rebuild in his modest shop, the same kind of low-tech garage where the car was originally built, largely by hand. In contrast, the Lola factory’s sophisticated autoclave, wind-tunnel, and crash-testing facilities appear almost other-wordly. The film spends a little too much time showing crashes; although this was intended as part of contrasting the old with the new to demonstrate the relative safety of modern race cars. That time might have been better spent interviewing Mario on that topic, since he has raced examples of both generations.

Photographed on large-format IMAX film, the movie lacks absolutely nothing in quality. All in-car shots appear remarkably sharp and vibration-free, and the sound, though enhanced in spots, is excellent. In fact, one of the most interesting selections on the DVD is “The Making of Super Speedway”, which documents the IMAX crew’s visits to a secretive Cosworth engine lab, a more open Lola Cars facility, and tracks such as Road America, Toronto, Detroit, Mid-Ohio, and Michigan. The movie company even bought an Indy car and adapted it to carry cameras on various mounts; the crew also built a mount for the old roadster.

The film ends with Mario and Michael seeing the restored roadster for the first time as it is rolled out of the rural shop onto the restorer’s lawn. Mario then takes it for a great autumn drive on a back-country road, blowing leaves everywhere and waving to a farmer on a tractor. Totally illegal, of course, but very sentimental, as you watch him go back in time. Apart from Grand Prixand Le Mans, which by now seem rather dated, this is the best racing film you’re likely to see.

You can watch it on DVD or Blu-ray at home, but in an IMAX theater, Super Speedway must truly live up to its name.

The World’s Fastest Indian »
« Zoom, The Global Race to Fuel the Car of the Future