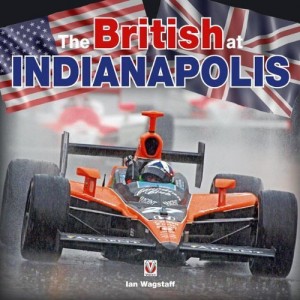 The race that bills itself as “The Greatest Spectacle in Racing” turns 100 in 2011. Even the U.S. Postal Service thinks this is a big deal and made the anniversary one of 25 subjects in its 2011 Commemorative Stamp Program. Held annually over Memorial Day weekend at the Indianapolis Motor Speedway in Indiana, the Indy 500 is considered one of the points in the triple crown of the three most significant motorsports events in the world (the others being the 24 Hours of Le Mans and the Grand Prix of Monaco). The track itself had been opened already in 1909 and so the Speedway began in 2009 a three-year long “Centennial Era” to celebrate its various centenaries. This book, published in 2010, celebrates the British contribution to the race, not just the drivers but the mechanics, engineers, designers, and even officials.

“. . . such is the size of the expatriate British community in Indianapolis that you get a better cup of tea there than most places in the US.”

Ian Wagstaff hatched the idea for the book after the 2007 Indy 500, a race that had been won by a Brit, a Scot to be precise. (Dario Franchitti, who would win it once more in 2010. He wrote the Foreword.) Only the year before Wagstaff had published The British at Le Mans (ISBN 9781899870806, Motor Racing Publications) which had won him the 2006 Mercedes-Benz Montagu of Beaulieu Trophy. Firing, as it were, “on all cylinders” he realized that an Indy book was the logical successor. If you know and love the, for lack of a better word, “lavishness” of his Le Mans book you will have to take your expectations of the Indy book a peg down because the publisher of the new one, Veloce, has simply a whole different house style.

But the writing is what matters most, and Wagstaff is in his usual good form. His involvement with racing goes back a long way: even before becoming in the 1970s the press and promo manager at Silverstone Circuit, the Home of British Motor Racing, he wrote for Autosport and Motoring News. Today, as a freelance journalist, he still writes for a long list of racing-related publications and attends races all over.

The Brickyard (so named after the 3.2 million bricks that made up the original surface) may be as American as apple pie but foreign makes and drivers have played a role here since the early days. In fact, European cars won from 1912 to 1919 but it wasn’t until the Indy 500 was removed from the Formula One calendar (it had been part of the F1 World Drivers’ Championship between 1950 and 1960) that European entries became a force in every aspect of the race. Cooper, Lotus, McLaren; British wins by Jim Clark in 1965 and Graham Hill in 1966; by 1978 most chassis and engines were European. Even Ford and Chevrolet engines were built in the UK by Cosworth and Ilmor. Today’s IRL would be unthinkable without Brits at every corner.

But aside from the “big” names” there is the proverbial cast of thousands—and you meet many of them in the pages of this book. Wagstaff has made the entirely sensible decision to include in his narrative those persons who are/were British citizens or British-born regardless of whose flags they campaigned under. Also, the book covers not just the Indy 500 but other classes including motorcycles.

The book begins with a few remarks about May 1911 at . . . Brooklands . . . mainly to juxtapose it with first the Indy 500 held 20 days later. Divided into four eras the story is advanced in the form of themes, augmented with interviews, quotes, and various sidebars.

The photos are plentiful, well chosen, and mostly quite large. All are captioned and credited. The color ones are a bit on the pale/dull side. There are also several race posters, a bunch of ticket stubs, and the odd piece of correspondence.

Four Appendices present British drivers (name, year, marque, position), chassis (in chronological order), engines (surprisingly also in chronological order; who knew there would be such a clear division), and drivers/riders in Speedway events other than the Indy 500. Thorough Index.

Flying Cars, Amphibious Vehicles and Other Dual Mode Transports »
« From Balloon to Boxkite: The Royal Engineers and Early British Aeronautics