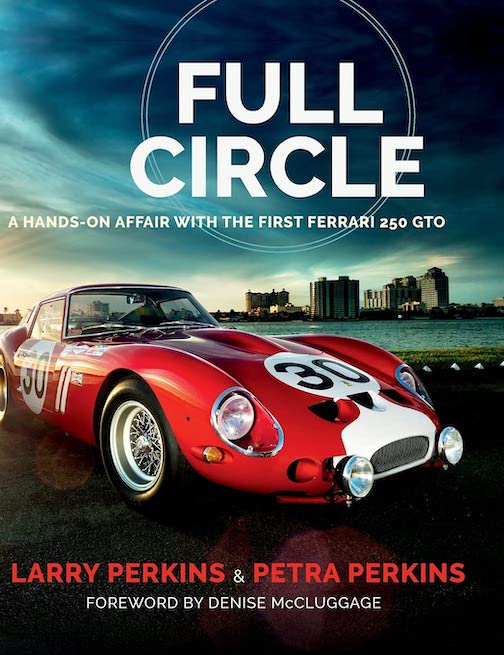 Could this be anything other than a Günther Raupp photo??

“Intrigued by speed, Larry searched the world in 1963 and found the ideal, once-in-a-lifetime race car; he sold it in 1966 after ‘driving the living shit out of it.’ He later found it, then lost it again for a long stretch. Then amazingly, in 2010, it found him. The GTO drove into Larry’s radar once more, and he was able to touch it, like a sort of magic talisman.”

No, the authors did not spill coffee on the keyboard. Think of it as guided imagery. Say it out loud. With gusto.

That, say Larry Perkins and Petra Perkins, is how a Ferrari V12 sounds, and they offer many more aural tidbits. Heck, it’s 2022—just get thee to YouTube and listen to a GTO. There are many moments in this book when the reader, especially the one who has never been close to vintage machinery, is asked to tap into their imagination so as to properly acclimatize to the world of 50+ years ago when this story gets underway. The smell of 250-weight gear oil, the chirp of skinny tires, the dial sound of a rotary phone. . . . The sound of money is still the same but what it represents then and now is not: the $10,000 Perkins scraped together for a year-old already race-tired GTO comes to, say, $85,000 in today’s dollars. Not exactly chicken scratch, except of course today you’d barely get half a GTO engine for that amount. A whole car, even used and tired, commands millions! Larry sold his, after only a few years and even more race-worn for, gasp, $3600. 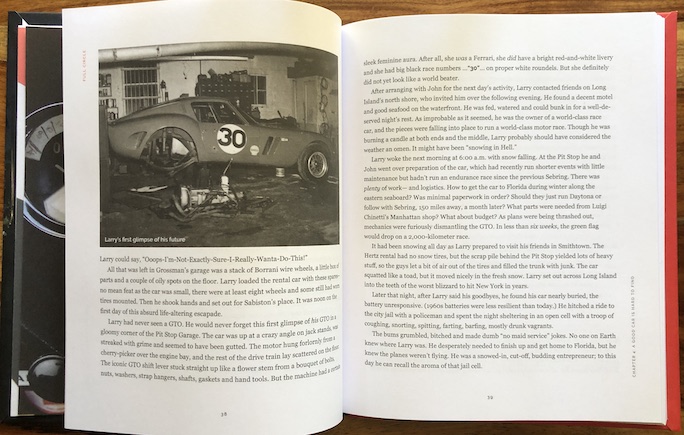 Perkins bought the car sight unseen, and not all assembled. This is the first time he sees it, and has the good sense to wonder if he bit off more than he can chew.

At the center of this story is a 1962 Ferrari 250 GTO, make that the GTO as this happens to be chassis 3223, the very first one built, although that didn’t mean anything to anyone in those days. This alone sets the book on a tack that no other is on, and if that were all it had to offer it would be plenty interesting. But the introductory quote and the book title already hint at a story with more layers.

It starts simple enough: a couple of rounds of after-hours drinks with the boys turn to bench racing, turn to the upcoming inaugural Daytona Continental 2000 kilometer endurance race, turn to . . . “if we only had a proper race car we could show them works teams what’s what!!” A name for their fantasy race team is hatched: BARF (remember, drinking is involved) which stands for Brevard (as in Florida) Auto Racing Fraternity. Picking the fantasy car is also easy enough: the same one the Big Boys were sure to bring to Daytona, the “Comp/62 berlinetta” aka Ferrari 250 GTO. Only four are known to reside in the US at that time. Most liqueur-fueled flights of fancy would end here, and in a hangover. This one does not, and you’ll be right alongside, from finding the car to prepping it to being in the cockpit during a race, and lots more. 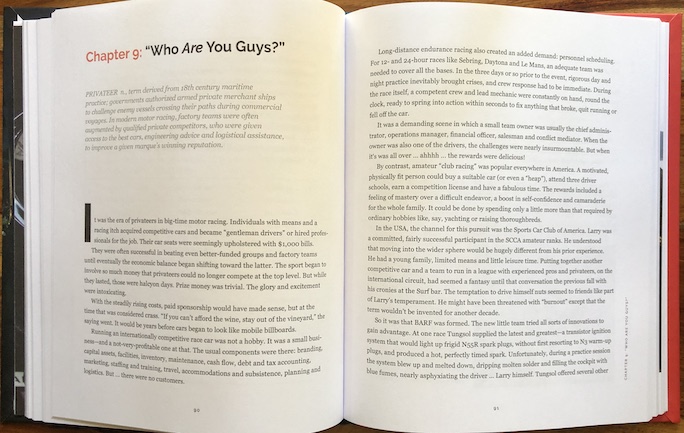 This, then, is a memoir or probably more fittingly, a ramble because it is not a blow by blow account of either the car or the man. Loosely chronological it is mainly concerned with building up to the times where these two storylines intersect, which is another way of saying it curtails the bits that are not directly pertinent—damn those scant incidental glimpses that will make the curious reader yearn for more. For instance: just how had young Perkins carved out a career path from trained geologist with plans of getting into the oil business to selling soap to supermarkets to becoming, literally, a rocket scientist (Apollo, Viking Mars Lander, and others). The latter would prompt him to step away from racing after only a few active years, which would not have made for much of a book. And then he becomes a sculptor, as one does, and a sailboat racer. Even a side plot is worth its own Movie of the Week treatment: teenage Petra attending a 1964 Sebring race and not learning until decades later that the man she had meanwhile met at her aerospace job and married (1991) had been on the starting grid that day, at the wheel of #3223! This review is turning into a ramble too . . . 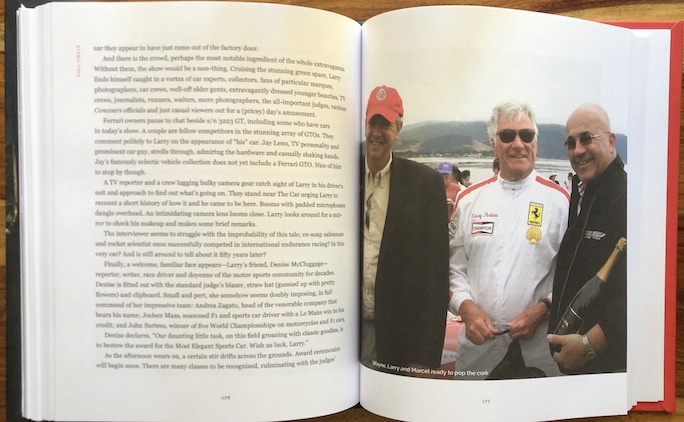 This is the sort of book only someone who was there could write, and write in this first-person, off-the-cuff, let-me-show-you tone. And you do not have to be a rocket scientist to compute that Larry is not a young man anymore so kudos that he was amenable to the idea of rolling up his sleeves and wrIte a book. There’s even a Glossary of racing lingo for the uninitiated, and a Bibliography. Not to forget, the poem “Full Circle” by Petra Perkins who has a background in various genres of writing.

One more thing: the book has a copyright of 2021, so how come it has a Foreword by someone dead since 2015? Because work on it started a decade earlier, after man and machine had that glorious reunion at the 2011 Pebble Beach Concours, photo above. There’s a reason Forewords appear at the front of a book: if they’re good they win hearts and minds right then and there. In this case it’s a lovely, pertinent, fully authentic piece from racing driver Denise McCluggage’s sharp mind (she raced a 250 GT herself), dated 2014. Reading it, you’ll get all amped up and can’t wait to get into her friend Larry Perkins’ account.

Books ordered from the author/publisher direct will (can) be autographed.