Tom Pryce: Memories of a Welsh F1 Star by Those Who Knew Him

by Darren Banks and Kevin Guthrie 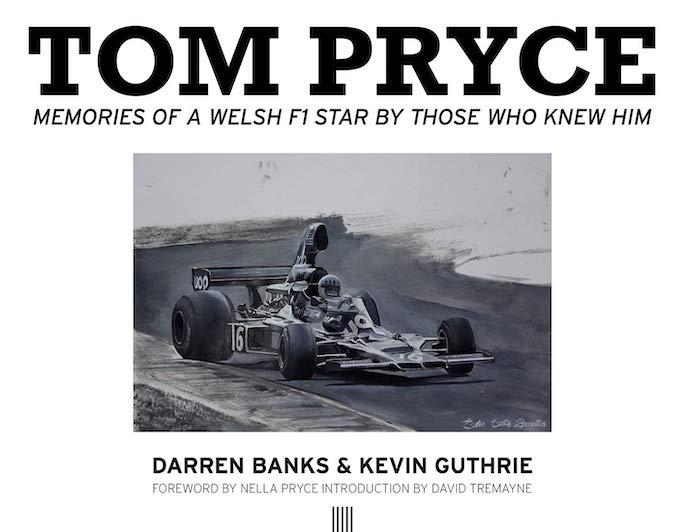 “One hell of a race car driver, who was giving everything he had when fate reached out and he was taken far too soon.”

This is a remarkable book about a hugely talented man whose star shone, if all too briefly, in the firmament of 1970s Grand Prix racing. I will confess, however, that when I first heard about the book, I wondered what it could possibly add to David Tremayne’s Lost Generation (Haynes, 2006), the book that had so eloquently told the story of Tom Pryce, Tony Brise, and Roger Williamson. I need not have worried, because this book is not only about Pryce the Shadow F1 driver, but about Tom Pryce the man, told from the perspective of childhood friends, neighbors, fans, co-workers and, most resonantly  of all, from Nella, his soulmate (below; also wrote the Foreword and this biography has her blessings). The book’s format is unique in the genre of  Grand Prix biography because it comprises nothing more than a collection of 68 first-hand, first-person reminiscences of those who knew Pryce best, enhanced by the perspective of the decades that have passed since  Pryce’s death at Kyalami in March 1977. 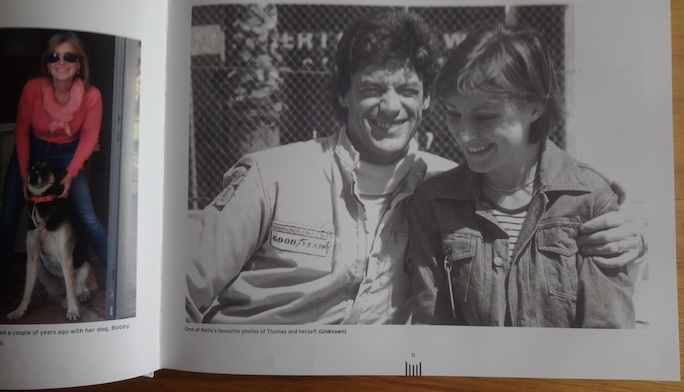 The book’s landscape format and high production values lend themselves well to the subject matter, and contributions range from Tim Schenken’s rather peremptory half page to the four pages’ worth of memories from Neil Trundle and Shadow designer Tony Southgate. They are interspersed with many photographs, depicting not only every stage of his racing career but also going all the way back to Thomas Maldwyn Pryce’s early childhood in the countryside of North Wales. I am sure that many, and perhaps even most of the photographs have not been seen before and they add to the elegiac feel of the book. They serve as reminders of a long lost era of gorgeous Formula One cars, chaotic race paddocks, and circuits where the crowd could stand almost within touching distance of a racetrack. I also admired how, in an inspired touch, the page numbers are cradled in the five vertical black stripes that adorned Pryce’s race helmet. 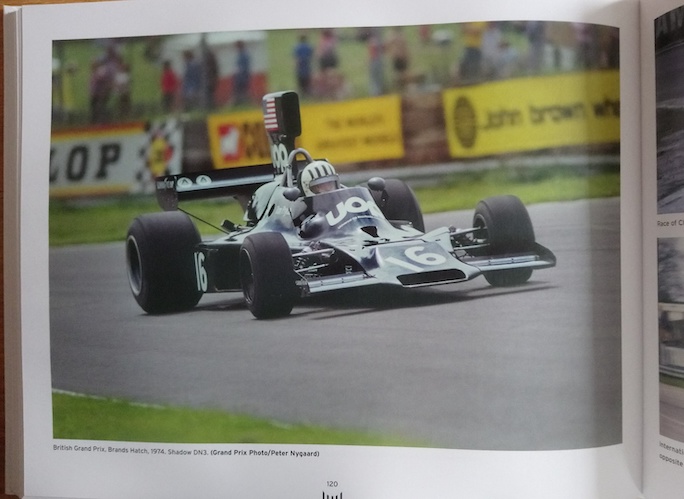 Look at the front of Pryce’s trademark white helmet—then look at the page number on the bottom of the page. Clever touch.

As David Tremayne opines in his introduction, Tom Pryce (b. 1949) was not only a racing prodigy, but he had an everyman persona that went to the heart of his appeal to the young enthusiasts, including this reviewer. Jackie Stewart and Mario Andretti had epitomized the new breed of slick, sponsor-savvy racers, James Hunt had played the role of the effortlessly confident iconoclast but Tom Pryce? He was the regular guy next door, the rural policeman’s son, the ingénu who just happened to have a God-given talent for driving race cars very fast. As fellow racer Tony Trimmer puts it, “He couldn’t see his own talent for a while.” And John Watson, “Where Tom differed from some other hard-nosed competitors was that he was a gentle man. He wasn’t aggressive and self- promoting.” Pryce had grown up a world apart from his racing peers, his mother had even sent him to a new school to learn English as Welsh was, and remained, his first language. And even when he hit the big time he was still, and endearingly so, the hick from the sticks. Pryce’s manager, Chris Marshall, tells the story of how he had given Tom a check for £3000 (almost twice the then average UK annual salary) but was bemused it hadn’t been cashed three months later. “I haven’t got a bank account and didn’t know what to do with it” replied Tom, disarmingly . . . 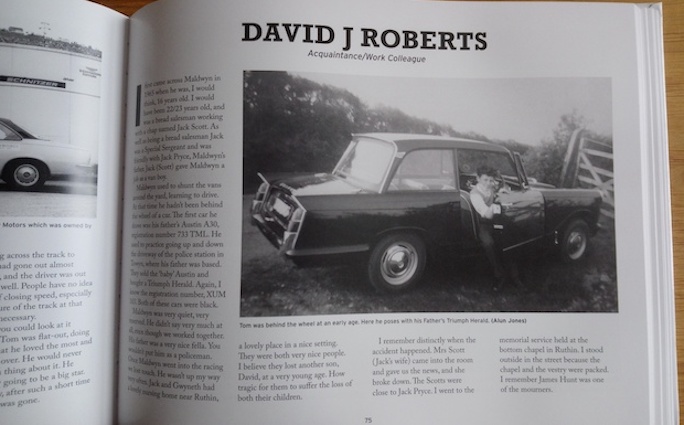 Pryce started driving a bakery van at the age of —10! And he knew pretty much right then that he wanted to become a racing driver.

Tom was always “Maldwyn” to family and friends, and as bakery co-worker Rod McCully comments, “I always think Tom Pryce was like a stage name.” It’s clear from the narrative of his contemporaries that Tom was a shy but popular young man, as defined by his very ordinariness as by his otherworldly talent behind the wheel. If you had been lucky enough to have seen him on track, you knew there was nothing self-effacing about Tom Pryce in a race car. He was mesmerizing to watch, and every bit as spectacular as his peer Ronnie Peterson, coincidentally another ingénu out of the cockpit. In that long-ago era of cross ply slick tires, single-seater race cars could be driven with heroic degrees of oversteer, as witnessed by Tom’s request to Neil Trundle at the 1973 Mantorp Park Formula 2: “I don’t have enough opposite lock. I’m on the steering stops.” And when he was asked if he’d like more understeer, Tom’s reply was a crisp: “No, no, that’s how I like to drive it.”

Tom Pryce is buried in the churchyard of St Bartholomew’s, Otford, not far from Brands Hatch, and reading this book evokes a funeral blessed by a host of eulogies. They may have been given almost fifty years later, but, if anything, the passage of time has given even greater weight to the insights and memories of the book’s many contributors. Incidentally, most contributions have the immediacy of spoken speech, which I think adds verisimilitude and authenticity, but I do question why several contributors thought it necessary to pepper their thoughts with the F word. Profanity has its place, especially when uttered in the heat of the moment, but it jars here, and says much more about the speaker than the subject.

It is difficult to imagine how this book could have been improved, and it will stand not only as a fitting tribute to Tom Pryce’s legacy, but to the enduring love and affection his friends hold for him. The book is also a testimony to the skill and diligence which coauthors Messrs Banks and Guthrie applied in tracking down these 68 people who had featured in Pryce’s life, and in so many capacities. I can think of only three others whose recollections might have added even more to this book—Don Nichols, Chris Meek, and Ron Dennis. But Shadow boss Nichols died in 2017, two years before work on this book started, and Pete Lyons’ superb Shadow – The Magnificent Machines of a Man of Mystery (Evro, 2020 ) contains plenty of detail on Pryce’s Formula One career with the team. Chris Meek died in 2016, but I would have enjoyed reading his (possibly unreliable) memories of Pryce. Meek was the larger than life, perma-tanned and implausibly raven-haired entrepreneur whose Titan Property empire had often sponsored, up to and including the tiny Token team. Chris Marshall termed the contract that Meek had given to Pryce as “the most awful contract I had ever seen.” No real surprise there, but there’s no doubt that the push from the Yorkshire playboy helped Pryce reach the top—and who doesn’t love a cheeky rogue? As for Ron Dennis, who knows? I am sure he was asked and, since his departure from McLaren, his diary must have had a few slots for an interview but there’s not a word from him. The omission doesn’t really matter, but as the other half of Rondel Racing with Neil Trundle, who fielded Pryce in Formula 2, I am sure Dennis would have had something to say, in his inimitable style.

Like David Tremayne, I was too shy to talk to Tom Pryce on the one occasion when I had the opportunity to do so, waiting in line at the Oulton Park café. But I will admit that, whatever gauche question I might have asked, it wouldn’t have been to evince an answer but only to enable me to say that I had talked to the wild-haired racer from the Welsh hills. I still wish I had, though. I can take consolation in having seen most of Pryce’s key milestones in Formula One—his debut in the Token car, his Brands Hatch victory, and his pole at Silverstone. And I thank God I wasn’t at Kyalami in 1977. 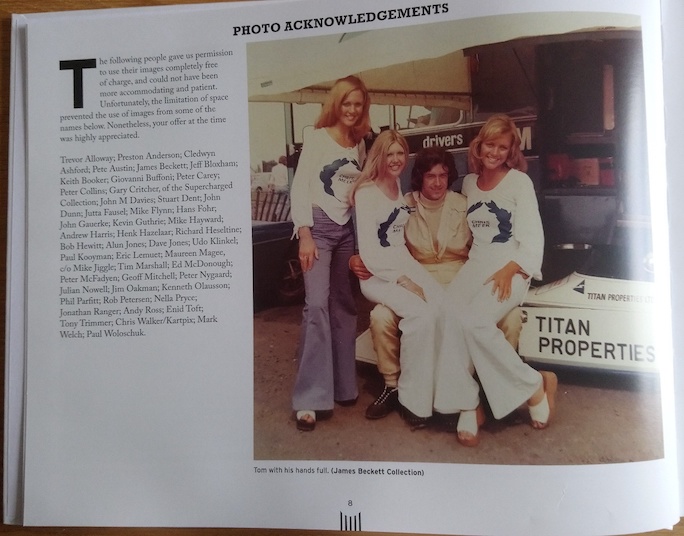 This is a wonderful book, and I cannot think of a more appropriate tribute to the driver who died 44 years ago, but the memory of whom still lights up so many lives. It is fitting that all profits from the book will be donated to the Tom Pryce Memorial Fund.

Tom Pryce: Memories of a Welsh F1 Star by Those Who Knew Him

by Darren Banks and Kevin Guthrie

Performance Publishing Ltd., 2020   [In US: Autobooks-Aerobooks]