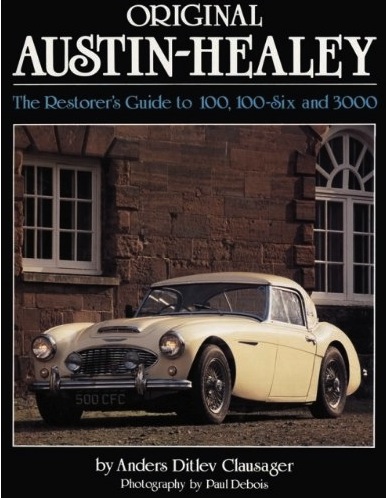 The appeal of the 1953–1968 Big Healeys may be timeless but their innards are not. Naturally, not everything that has perished has been replaced with the correct parts or proper finishes, and the information in this book will provide the restorer and potential buyer with a definitive catalog of the way things should be.

These Healeys in particular are afflicted by considerable inconsistencies regarding their restoration and service history because the vast majority of the original production went overseas, mostly to America with only about 5% remaining in the UK home market. With many of the export cars being repatriated, having a reliable guide to ascertain their conformance to factory spec is as important for the buyer and restorer as it is for the concours judge.

Making a strong showing in the export market is, of course, exactly what Donald Healey (the ex-Triumph chief engineer and in business for himself since 1946) and his partner Leonard Percy Lord (chairman of the Austin Motor Company, then one of Britain’s leading car makers) had intended, both to make a name for the brand and to bring in much needed hard currency. In fact, the Big Healey was blessed with such commercial and sporting success that the model could easily have been updated and soldiered on—had it had not been for one Ralph Nader’s campaign to push for the adoption in 1968 of the first-ever safety and emissions regulations in the Healey’s largest market, the US. The cost to bring the model up to spec was deemed too large and nothing came of the few Healey 4000 prototypes (powered by the same 4L Rolls-Royce engine that already did duty in the Vanden Plas Princess).

Danish-born Clausager wrote the first edition of this book in 1990, right in the middle of his 1979–2000 stint as the British Motor Industry Heritage Trust’s archivist. (In 2000 he took a similar position with Jaguar Heritage.) Thanks to that job, it was his daily bread to answer enthusiasts’ inquiries about the various Rover Group products. Also thanks to that job he had unequalled access to company records. Ergo he both knows what questions are the tricky ones and where to find the answers. He has some 20 books to his credit, several of them this publisher’s Original series.

The book is neither model history nor how-to repair guide. Plenty of those exist already. Instead, based on data from factory records and parts catalogs, each of the three models is described in short sections explaining components and assemblies, trim, options, and accessories. Matters of identification and dating are addressed, as are [export] market-specific variations. Thus the book is probably not one you would read cover to cover but to look up specific items. Several tables enumerate gear rations, and tabular summaries capture detailed production numbers. A brief one-page Buying Guide highlights model-specific virtues and vices.

The photos, especially the detailed close-ups, make a critically important contribution in this sort of book and were specifically taken to go hand in hand with the text. Photographer Paul Debois, who has done the photos for several books in this series, shot 10 cars that were either uncommonly original or correctly restored.

Clausager is of course mindful of the fact that on this level of magnification endless learned discourse might ensue. To keep civil unrest to a minimum he took the precaution of holding a one-day symposium in the UK to have a draft of the manuscript and the photos vetted by marque and model specialists in both the club and service world. Similarly, feedback was solicited from North American specialists. This book, then, represents the collective wisdom of anyone who is anyone in the Healey world. Also, it is now in its sixth edition which would have allowed plenty of opportunity to incorporate whatever deficiencies may have come to light along the way.

Ferrari 250 GTO: The Definitive History of a Legend »
« Art Deco and British Car Design: The Airline Cars of the 1930s