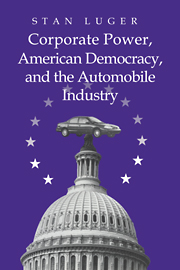 The introduction to this book advises that this work has grown out of a dissertation the author submitted to the Graduate Center of the City University of New York. It is a scholarly study of the history of the power and influence of the automobile industry on governmental policies and the interactions of government, automobile industry, and societal pressures.

The book opens with an overview of the various theories in the field of Political Science that deal with the study of power in societies. The next section discusses the structure of the automobile industry and its interrelationships to society and the economy. It is here that the reader is first made aware of just how pervasive the auto industry is in our economy. Figures quoted show that GM alone accounted for 1.5% of the nation’s economic output in 1995, while Ford accounted for a further 1.2%. To put those numbers in perspective, consider that in 1995 GM had sales greater than AT&T, IBM, Microsoft, and Federal Express together! In a July 1998New York Times article Microsoft accounted for only 0.1% of the GNP. It is this and enormous economic importance that allows the automobile industry to exert such influence on policy-making decisions of governmental institutions.

The next several chapters of the book break the history of the automobile industry down into four basic time periods, based on the success or failure of the industry to exert influence on public policy. The four basic periods are from the start of the industry to 1966 (“Corporate Political Hegemony and its Decline”), the period from 1967 to 1978 (“The Politics of Compromise”), the period from 1979–1988 (“The Resurgence of Power”, “The Triumph of Corporate Power: Regulatory Policy” and “The Triumph of Corporate Power: Trade Policy”) and finally the chapter “Interregnum: 1989–1996”.

All of these sections examine in detail how the automobile industry used its influence to try to mitigate legislation that the industry felt was detrimental to its business goals. Public opinion has, in many ways, been the major force for change. It is interesting to note that in the mid-1950s Ford offered dash padding and seat belts as optional equipment. Ford data showed that these two options were the most popular of all the options offered that year, however GM used its monopolistic weight to force Ford to stop offering these options. Ford could have been driven out of business or suffered severe economic consequences if GM had decided to wage a price war, so Ford dropped the options. It took the concerted efforts of politicians, bowing to public sentiment, and people like Ralph Nader and his book Unsafe at Any Speed to finally bring about safety legislation.

Throughout the book there are examples of the automobile industry using its financial strength (an estimated 100 million dollars spent on lobbying efforts alone in 1996 vs. the $600,000 dollar budget of the main automobile safety lobby group, the Center for Auto Safety), its contribution to the gross economic output and employment statistics of the country during difficult economic times and whatever other means are available to mitigate negative (read costly to the industry) legislation. The book is full of examples of where the industry sought, and got, relaxation of safety legislation (such as airbag implementation deadlines), CAFE fuel economy targets, and emissions regulations as well as limitations to competition from foreign manufacturers, by arguing that the cost to the industry would lead to significant cost increases to the public, or a significant cost in loss of jobs or a reduction in sales which could lead to loss of jobs, higher unemployment figures, and a negatively impacted GNP (which of course are not good things for politicians seeking re-election). There are also examples where outside forces have shaped public opinion, such as rising death tolls on the nation’s highways, the discovery of secret recalls, the oil crises etc., which led to fundamental changes in the industry from such things as increased competition from more fuel efficient foreign cars, and safety legislation.

The author points out the ingrained feeling of Americans that the automobile is an expression of personal freedom. This idea is so ingrained that mass transit funding is dropping off at a time when one could argue that these expenditures are probably long overdue. Much of this impression is undoubtedly due to the attempts in the past (and ongoing) of the automobile industry to make the automobile a symbol of freedom, sex appeal, power, and social success.

In summary, this monograph examines the automobile industry and its ability to shape public opinion and affect public policy. This is done from the perspective of a political scientist evaluating the history of the industry with respect to the challenges it has faced during its first 100 years. This is not casual reading or even targeted at the automobile enthusiast per se. However, it does present a good picture of the industry, the challenges it has faced and how it has dealt with them. Certainly emissions controls, safety regulations, and import restrictions affect any motorist—whether they know, or want to know it or not.

Understanding the complex interplay between the industry, the government and its regulating bodies, and the public will help the reader better understand how legislation, which can severely hamper a company which sells only a small number of vehicles, can come about and perhaps be altered to allow for such small volume production to continue.

In reading the book one cannot help but come away with the feeling that the author does not, perhaps, approve of the auto industry and its methods, and he probably would be found in the camp of Mr. Nader. In spite of this the author does a creditable job of presenting the material. For readers interested in policymaking with respect to the automobile industry, it is a jolly good read.

Copyright 2010, Dave Pass (speedreaders.info).
Adapted from a review first written in Dec. 2000 for the The Flying Lady, the periodical of the Rolls-Royce Owners’ Club (RROC/USA).