David Molyneux: The Racer’s Edge, Memories of an Isle of Man TT Legend 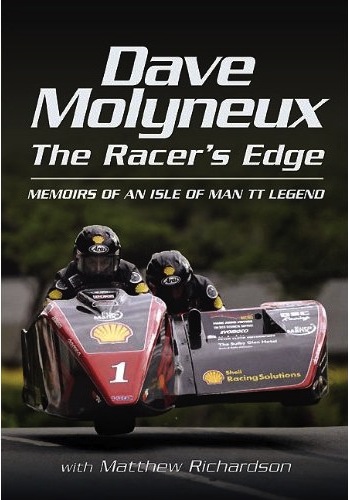 by David Molyneux with Mathew Richardson

Who would have thought that when the first race on the Island was held in 1904 (because racing in Britain was forbidden and the 1903 introduction of a 20 mph speed limit) that more than a 100 years later the Isle of Man Tourist Trophy could lay claim to being the oldest circuit in the world still in use? And for 31 of those years native son Dave Molyneux—Moody Moly—has competed here, advancing from essentially self-taught greenhorn to becoming the most successful sidecar driver ever and the only trike competitor to be inducted into its Hall of Fame.

That 1904 race, the Gordon Bennett Car Trial, was for automobiles. The next year, the car race was to be followed the next day by a motorbike race which ended up being cancelled because the bikes couldn’t cope with the steep hills and almost 1900 feet of elevation changes. The 37¾-mile mountain course is to this day considered one of the toughest events anywhere. Doing it on four or even two wheels is hard enough but the laws of physics present unique challenges to three wheels. Ever driven a motorcycle/sidecar combination? Turned left? Turned right? Completely different behavior. Now imagine doing it at speed, in inclement weather, uphill, downhill, on regular roads bordered by stonewalls and telephone poles—the horror.

Molyneux senior traded his wrenches for a driver’s helmet when Dave (b. 1963) was only two and so his earliest memories are of the racing life with all its peculiar triumphs and tragedies and uncertainties. Undeterred by even his father’s death on the track, Dave chose that life for himself. As co-author Richardson (curator of social history at Manx National Heritage and military history writer) says in his Introduction, this “is the story . . . so far”—because Moly isn’t done yet. He almost was, in 2006, when he suffered a potentially career-ending accident, and it is in the aftermath of that event that the two authors’ paths intersected and the idea for this book was hatched.

Molyneux has a reputation for a “damn the torpedoes” kind of approach to life. If you didn’t know that already, you’d get that impression within only a few pages of reading this autobiography. If you’re overly attached to the Queen’s English or politically correct, sanitized language you’d better fortify yourself. The tone, the pace, the syntax, everything about this book is as if it was typeset straight from a stream-of-consciousness monologue, as if the man were sitting across from you in the pub. Richardson’s role in this process is to impose some sense of order and direction to this and also to help Molyneux achieve the primary goal of “putting the record straight.” He rightly says that post-race interviews, when the adrenaline is still running wild and the driver hasn’t yet had an opportunity to think about his own let alone anyone else’s performance, are hardly conducive to giving a clinically correct account. Add to that the fact that Moly considers himself a complex and very private person and it is easy to see why he feels misunderstandings and rumors (such as the widely reported one that he had retired) have piled up for too long.

Clearly his readers appreciate an up-close pull-no-punches look at his life: the book is already being reprinted. The story is current up to 2010; do not infer from the subtitle that only TT races are covered: British and European championships, Grands Prix and other races are also part of the story. A final chapter deals with his activities as constructor of road racing sidecars under the name DMR which are used by many other TT winners.

The photos are bundled into one 16-page section (so unnecessary nowadays and not user-friendly!) of mostly color photos and well captioned. These pages are not numbered which makes the List of Illustrations at the front of the book rather pointless. There is one map the mountain course; appended are chapter notes, two b/w technical drawings of a Kawasaki sidecar outfit, and tables of 1987–2009 results. Short Index.

Very readable, and such an easy way for people who have never given sidecars a second thought to get a really good understanding of a thrilling racing machine and the sort of person who can tame it. If enough people buy this book or funds materialize in some other fashion, Molyneux will race in the 2012 TT. You can help make it happen!

Ships and Shipbuilders: Pioneers of Design and Construction »
« Sunshine, Speed and a Surprise: The 1959 Grand Prix of The United States