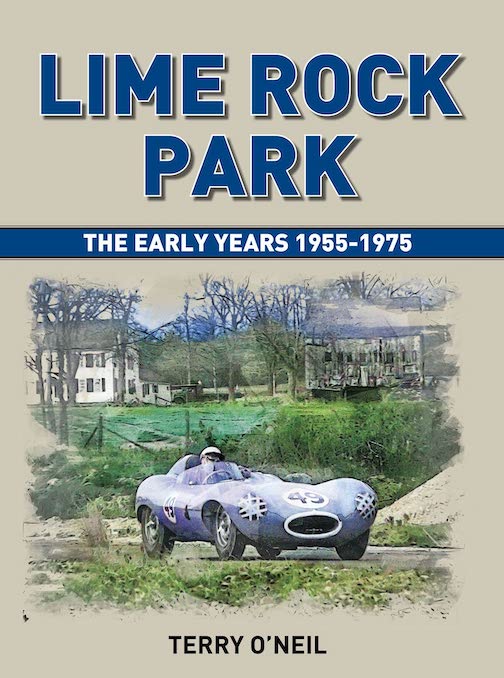 “Such was the interest and vision of the SCCA delegation in the potential of the site, that Jim Vaill approached the Lime Rock town authorities in early spring of 1955 to put forward his idea of building a road course on the site of the gravel pit and surrounding area, and seek their permission to do so. He explained that he wanted to copy the ideas of European circuits, and hold similar events that would attract large crowds of spectators, that in turn would benefit the economy of the area.”

If the history of America’s oldest race tracks is on your radar then so will author Terry O’Neil’s name. Of his last book, the similarly monumental The Golden Days of Thompson Speedway & Raceway in 2018, we said that O’Neil had found a niche—plumbing the depths of American sports car racing—and owns it. When he wrote the Thompson book this Lime Rock Park opus was already in the works, as was another one, yet to be published which may well turn out to be about one of the other granddaddies like Road America (Wisconsin) or Laguna Seca or Willow Springs (both California). All four venues opened at about the same time and while O’Neil several times declares Lime Rock Park “America’s oldest continuously operated road course” LRP Corp. is content with calling the circuit “one of America’s oldest.” What no one can argue about is that LRP has today exactly the same layout as it did when it started, which makes it utterly unique in that regard—and that there are no grandstands/bleachers! That the track is as short as many people’s neighborhood strolls (around 1.5 miles depending on how you measure) is neither here nor there but it does make for busy laps (6 corners) whose drama is further enhanced by serious elevation changes. As LRP’s current General Manager Michael Rand says in his Foreword, “Many love it, some may loathe it, but all respect it.” 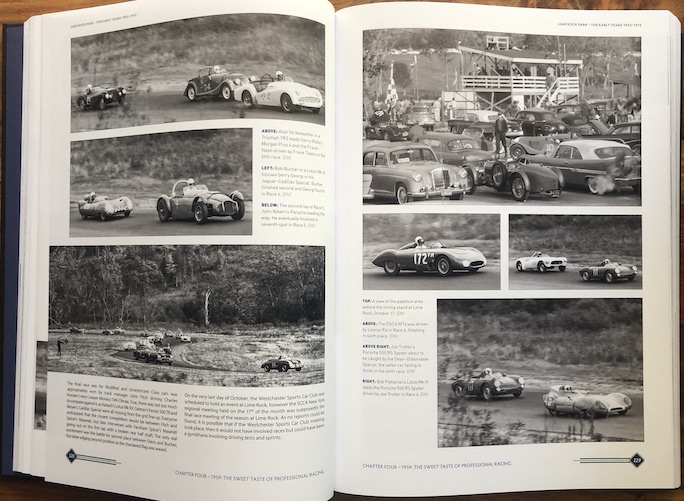 Even the paddock is full of interesting machinery! (1959)

The “loathing” part is actually also something that is very specific to “the Road Racing Center of the East” in that the surrounding community has been at odds with LRP at all times since the beginning, bringing lawsuit after lawsuit even though the town fathers had initially given the owners of the 385-acre site 2:1 approval back in 1955. A quick look at the book’s Table of Contents shows right away that the book will be as much about racing as about business and legal matters (facsimiles of several court documents make up a good many pages in the Appendix). 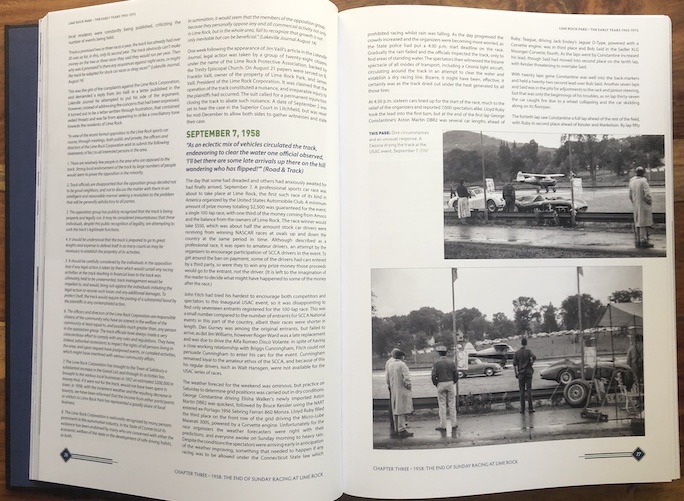 Every major American road racing sanctioning body holds events here, such as American Le Mans Series, IMSA, Grand-Am, NASCAR, SCCA, Trans Am, and World Challenge. The common denominator is that cars race cars—so what’s an airplane doing driving around the track? Drying the asphalt after a rain with its propeller.

O’Neil is always very thorough in explaining his MO and the generic and specific limitations to research of race data such as participants (cf. listed v. actual) and results. Read those opening remarks and read them again to avoid stumbles. Matters at LRP are not helped by the fact that a multitude of sporting organizations as well as motor and marque clubs used and still use the track and each is in charge of its own record-keeping, certainly and especially so in those first two decades this book covers when there were four changes of ownership. It is really only in the decades since Skip Barber became owner (1984) that there is any sort of normalcy. Those first 20 years took 680 pages to cover—image how many more will be needed if O’Neil ever brought the story up to date! 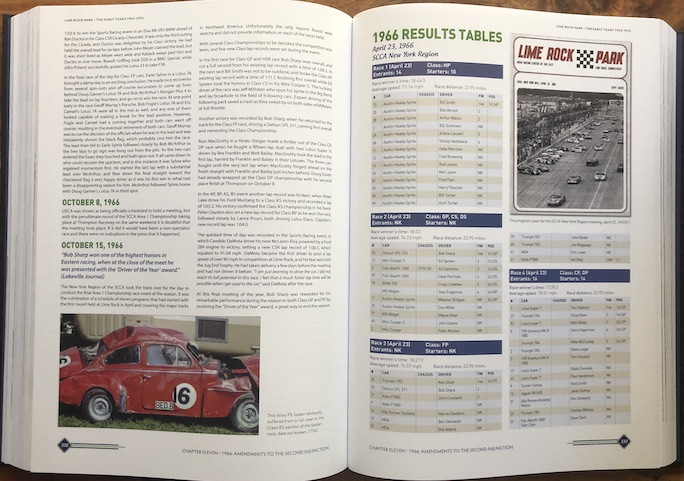 The book progresses in chronological order by year and within that by event. Each race is described in narrative form and then summarized at the end of each chapter in tabular form (above). One has to assume that a reader of this sort of niche book will have personal or historical criteria that bring them to the book in the first place. There is an enormous wealth of minutia here but readers with more general interests will also be drawn in by the sweeping connecting of dots in regards to drivers and cars. (Did you know, for instance, that “the most trusted man in America”—Walter Cronkite—was a racer before he became a broadcaster?) The 1000+ photos, many of which new to the record, ought to intrigue pretty much anyone with an imagination, and the longer you look the more you discover. Volvos and DKWs and Goggomobils (Cronkite raced one; there is a photo of him folding himself into this hat box of a car) sharing the track with Coopers and Lister-Jaguars; the greatest of racing personalities alongside locals you’ve never heard of; and no really hair-raising accidents because state of the art safety features were another thing that set LRP apart. 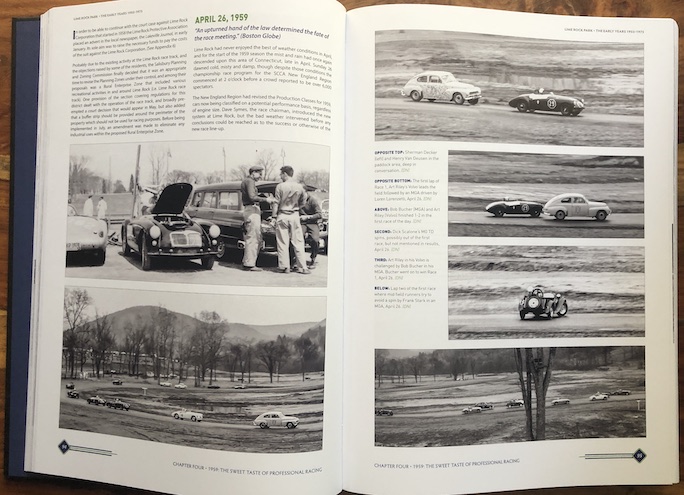 The very deep Index is divided into people and cars, and all illustrations list their sources. The book is limited to 750 copies of which 150 signed/numbered books are available only through the publisher direct (at the regular MSRP). The sheer size and heft of the book lead to the unavoidable comment that this is a very unwieldy honker to handle; the 760-page Thompson book had been in two volumes. 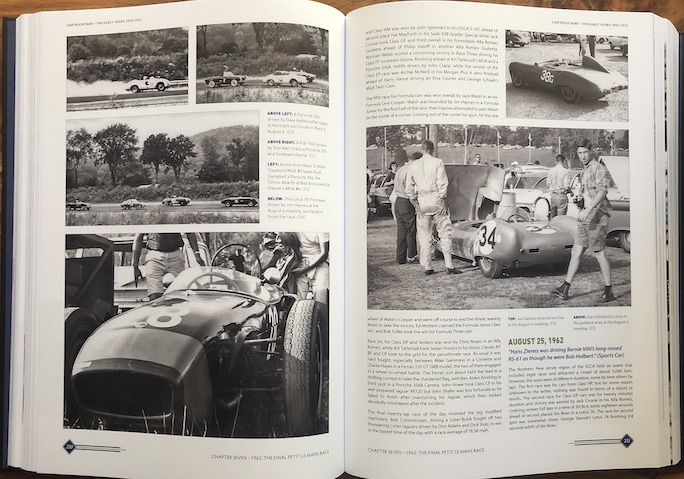 If you consider O’Neil’s body of work as a whole, not only the books but the stacks of magazine reports, you cannot help but marvel at a mind that works in mysterious ways. He said he enjoyed writing this book—and, really, why else would one do it?—but anyone who has ever organized a research project of this magnitude will have at least an inkling of what unfathomable frustration an author has to overcome. Whatever O’Neil’s next book is, make room for it now.

The Key 2021, At the Top of the Classic Car World »
« On a Global Mission, The Automobiles of General Motors International, Vol. 3