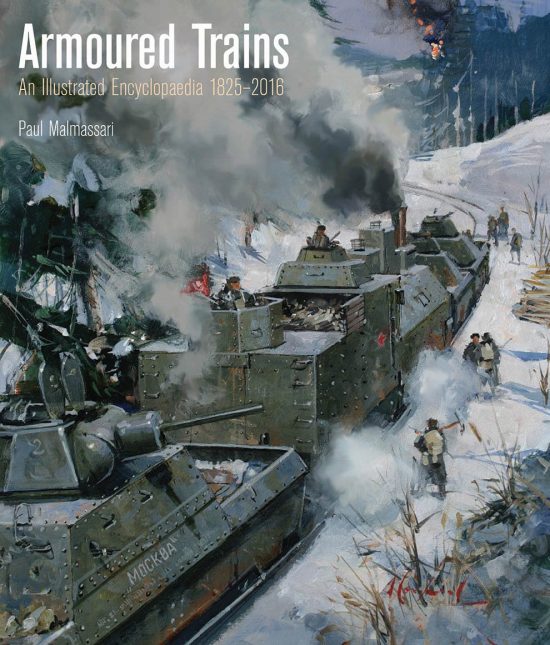 “For their part, military historians have paid the armoured train scant attention up until recent times: traditionally they dismissed it as the poor relation of the tank, unable to manoeuvre freely, unsuited to offensive missions, and only suitable for policing duties. In sum, in Western culture the armoured train seems to be unworthy of inclusion in any line-up of major weapon systems.”

Armored trains not on your list of interests? How about world politics or military matters? Industrial history? Period photography? If you have trouble fitting “nuclear warfare” and “armored train” into the same sentence, you’ll want to read this book.

First published in French in 1994 as Les trains blindés, 1826–1989 (Editions Heimdal, here misspelled in the Impressum, grumble) a simple look at the date range in the title tells us this English version must be a revised version. And it is, in a big way, adding over a 150 pages and more countries, now 72, from Angola to Yugoslavia.

It’d be easy enough for even the uninitiated to speculate that countries like, say, India or Vietnam, inherited their armored trains from their former colonial “protectors,” but what about North Korea? Switzerland?

With a doctorate in history, Lieutenant-Colonel (ret.) Malmassari of the French Army has had his mind on the history and purpose of mechanized warfare ever since he commanded a tank regiment in the Armée de terre, an organization active since the 15th century. Trains—obviously—don’t go back that far but the almost 200 years Malmassari covers here could make for a lifetime of study. Or, in this case, about thirty—plenty to make him one of the key chroniclers of the subject and this book a must-have. It is a good thing, then, for all who don’t speak French to now have this masterpiece in English; a very deserved tip of the hat to translator Roger Branfill-Cook, a Brit in France whose military interests range from historic reenactments to conducting battlefield tours to lecturing and writing on pertinent topics. 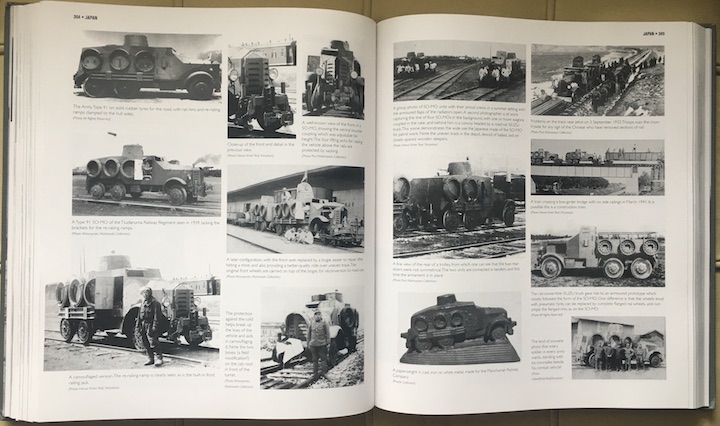 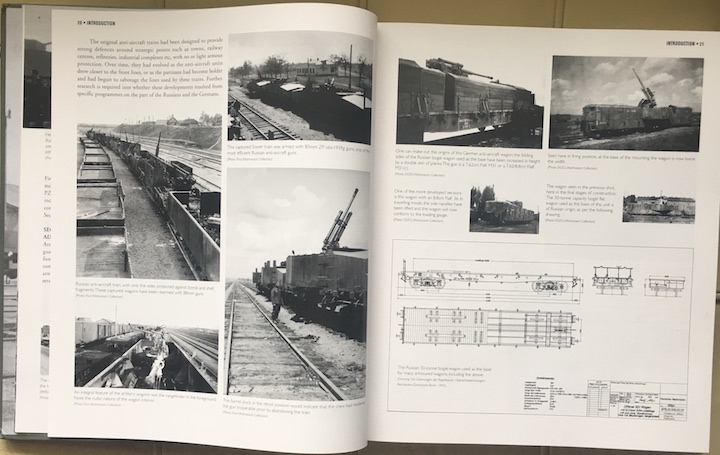 From the American Civil War (1861–1865) to the Second Chechen War (1999–2009) and covering apparatus from flimsy trolleys used as scouts, to road vehicles adapted to use on rails, to purpose-built artillery pieces than can flatten cities the variety is enormous. One thing that is not really investigated is the different railway gauges that could seriously complicate seamless transport across different systems. Rail torpedoes, safety wagons—a whole specialized world awaits discovery. 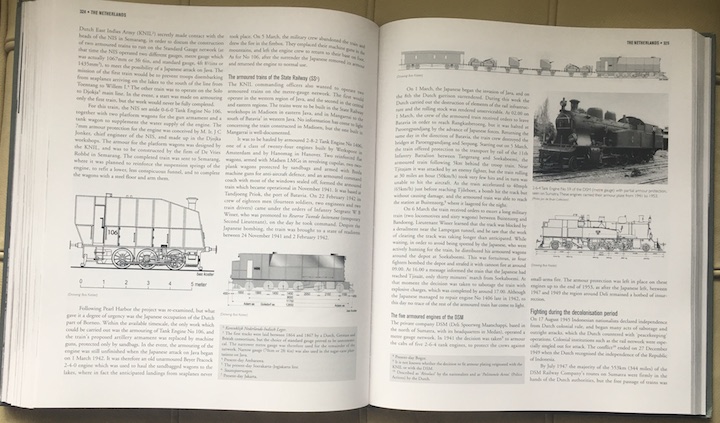 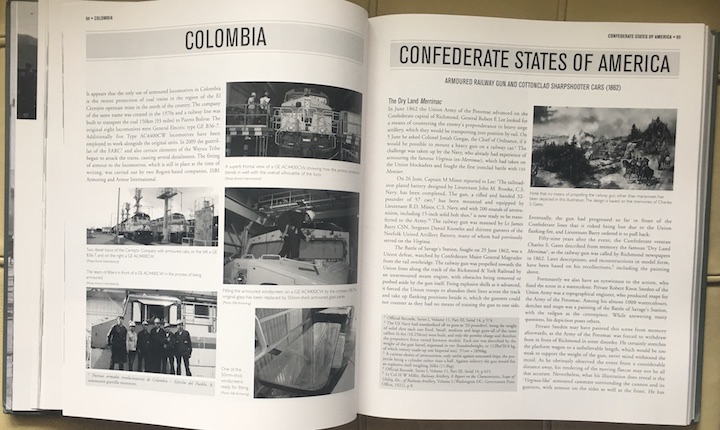 The book describes design and construction, and then role, mission, and classification of armored trains, divided by country in alphabetical order. While the first military use of the railway in specific military applications dates to 1825 the book begins earlier, summarizing the steam-related inventions of James Watts and Cugnot. 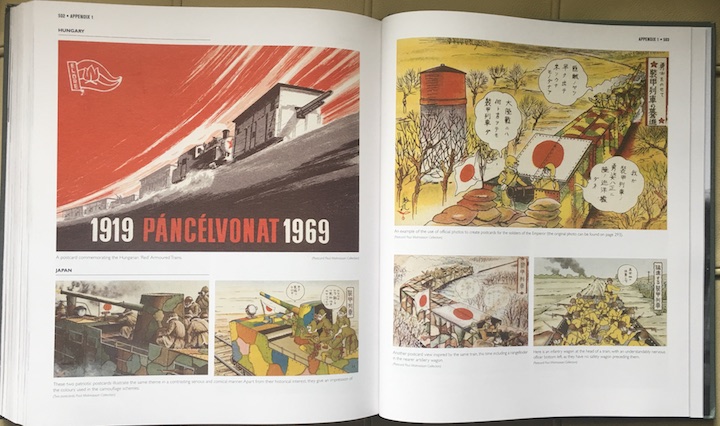 Being an illustrated encyclopedia, the book has around 1500 illustrations, all b/w except propaganda material and examples of fine art (as above and below). One of the 2 Appendices contains a selection of original factory plans; the technical drawings illustrating the text are in 1:87 scale which will of course delight HO modelers. 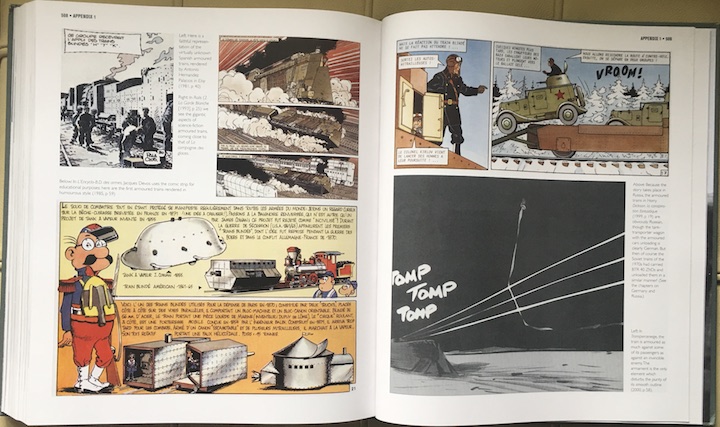 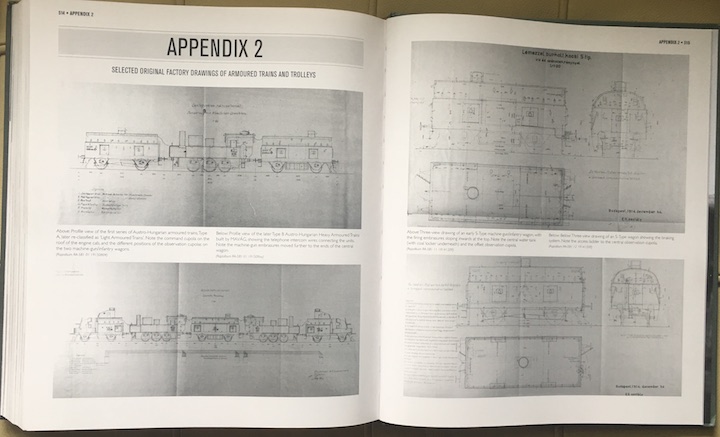