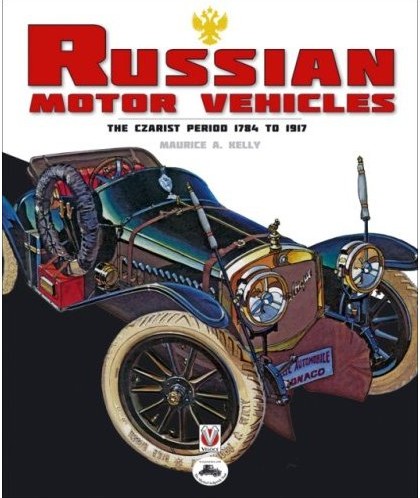 If the books in your bookcase are organized, say, by topic or by country, this book will live a lonely life—in Siberia you might say. The literature on Russian vehicles, especially the Czarist era, is exceedingly thin, and even if there were more, this book would stand out. Written by a former military engineer and present-day technical author this book was some 30 years in the making and covers largely untrodden ground. Much of the research was done in Russia using primary sources. Even to people who pay attention to such things, especially in the Western world, little is known by way of hard fact about vehicle production in the Russia before the 1917 Revolution. Aircraft, locomotives, and especially naval craft are the usual topics of books about Russian machinery. It was the pioneers of Czarist Russia that made it possible for the Soviet Union to become by 1937 the largest producer of motor vehicles in Europe—albeit at a cost of declining innovation and quality.

This book is a detailed, but brief, survey of all aspects of vehicle production including motorcycles, military machines, even steam and electric vehicles, and covers the early efforts from around 1784 to the early 1930s. Its main sections are “Manufacturers”, “Pre-Revolutionary Coachbuilders” and “Tracked & Military Vehicles. The latter is particularly noteworthy for its explanation and depiction of the “Systeme Kégresse” developed by Frenchman Adolphe Kégresse who had been in charge of the Czar’s garage. This “auto-sledge” concept adapted half-tracks in order to propel vehicles on Russia’s often snowy, slippery surfaces. Among the few well-known such vehicles in the West is a Rolls-Royce Silver Ghost that is often associated with Lenin. It was used by him, but it really was one of the cars owned by the fallen last Russian emperor, Czar Nicholas II, and was subsequently requisitioned by Lenin’s Provisional Government.

Many, probably most, of the period photos will be new to the Western reader. The book does acknowledge that their quality, given the poor source material, is not stellar. Most of the illustrations were specially drawn (in color) by the Russian technical artist Alexandr Zakarov. The book will open eyes as to the talent and ingenuity of Russian engineers and craftsmen and their contributions to the international stage. As an example, it was the firm Russo-Baltic Waggon Works that built and put into series production the world’s first four-engined aircraft, Igor Sikorsky’s Ilya Muromets biplanes

The book lists the sources that were used in the research; an appendix lists the locations of main engineering works and those of tire and aero engine manufacturers as well as component makers. A short bibliography and index round out the book.